The Making of the Ulsterman (pt3) 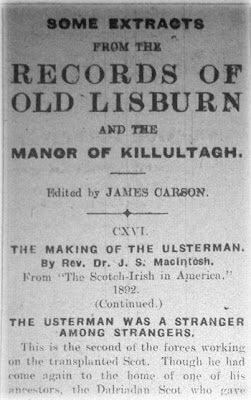 THE USTERMAN WAS A STRANGER AMONG STRANGERS.

This is the second of the forces working on the transplanted Scot. Though he had come again to the home of one of his ancestors, the Dalriadan Scot who gave to Scotland her abiding name, still was in very sooth a stranger among strangers; and he was the stranger brought in by the ever hated Englishman. He was an alien to the alien Celt. Who, what, whence were the resistless Scots of Dalriada coming so early into the Strathclyde, no ethnologist has yet shown; but we know enough to affirm they were not of the South-Irish Celts. The indubitable strain of Celtic blood in the Ulsterman of the Plantation was brought to, not taken from Ireland.

This fact, that the Ulster colonist was a stranger, and the favourite, for the time, of England and her government, wrought in a two-fold way; in the Ulsterman and against him. It wrought in him at once the sense of ownership, the belief in his agrarian rights, the firm faith of heritage, the idea of coparceny as existent between the undertaker and the colonist; and out of these faiths grew the thought that the land was the settler's own on fulfilled conditions; that tenure was a fixity; that a home had been pledged if that were made and held against all comers and accruant profits were shared with his chief. The roots of Ulster tenant-right run far back and go deep.

Again, the fact that he was the royal colonist wrought in him the pride, the contempt, the hauteur and swaggering daring of a victorious race planted among despised savages. What at a later day was seen here may be seen down all the stretch of Ulster history. I have myself seen it, and heard time and again he would "lord it" over the mere Eerish. And the rulers of that hour both cultivated that feeling and enforced it. The Celt of that day had nothing to make him winsome or worthy of imitation. Romance and sentiment may as well be dropped. We have the hard facts about the clansmen of the O'Neill. The glory and the honour were with England. The times were big with the fresh British life. The men and women of that age and the age just closed are mighty by their witching force of greatness in good and evil. It is the era of Britain's bursting life and greatening soul. Song and statemanship, the chiefs of the drama, and the captains of daring are telling mightily on our forefathers in England and in Ulster. The new "Plantation" itself is full of enchantment when contrasted with the old state of internecine war. Let the historian wave his magic wand, and let the dead live, and the yesterday be our own to-day. We are in the Down-lands, fair lands of the circling sea, and rolling hills and silvery streams; and right before us are hoary ruins. It is the Grey Abbey. It is a genial day of early July, 1605, and four men and three women drink from the old well. They are worth more than we can give a swift glance, for they are the fathers and mothers of history. There is the Con O'Neale, wild, wicked, funny Con O'Neale, MacBryan Feartagh O'Neal, and round him gathers the very richest romance -- that wild dash on the easy English garrison in the clachan at Laganford, now known as Belfast -- that all adroit whisking off from the sleepy soldiers of every winebutt -- the arrest of the raider and his imprisonment in Carrick Castle -- the arts and wiles of the Jailer's daughter under the tutelage of Tom Montgomery -- the flight to London -- the amusing meeting with royal Jamie. Beside Con stands his friend in need, the bluff, half-smuggler captain Tom Montgomery, who made love to the jailer's daughter, Annie Dobbin, and carried off both Con and Annie as his own wife. Beside Tom rests on his strong staff Hugh Montgomery, of the noblest house of Eglinton, that soldier of fiery soul but rarest forethought, whom Prince Maurice, of Orange, had trusted as a very right arm. And the fourth man is the ancestor of the great Dufferin; he is one James Hamilton, the brainiest of them all, who came from a Scotch Manse and from the side of a great souled Presbyterian minister to be one of the world-makers in his deep-stamping of Ulster life and Ulster men.

And their wives; yes, they too are worthy; that jolly, mischievous Annie Dobbin, without whom there would have been no freed Con O'Neal in London making compact before King James with both Montgomery and Hamilton for the earliest settlement of Down. With her is Mistress Hamilton, that gentle mother to her loved folks. And noblest perhaps of the three is the mother of Ulster industry, the "clever and capable" Lady Montgomery, who built the water-mills to do away with "quairn stanes"; who overlooked her own model farms; who encouraged and guided the growing of flax and potatoes; who went around teaching spinning and weaving, both of flax and wool; who began the weaving of "the Ulster breakin;" and who lent money to the struggling till they were able to stand alone -- let her live forever -- "the mother of Ulster manufacture."

But these proud and haughty strangers with high heads and their new ways, were hated as aliens and harried from the beginning by "the wild Irish."

The Scorn of the Scot was met by the Curse of the Celt.

The native chiefs and their clansmen did not distinguish between the government and the colonists; nor had they right, nor did the colonists give them any cause. The hate and the harrying of the Irish were returned, and with compound interest, by the proud Ulsterman. To him the "redshanks'* of the "wild Earl" of Tyrone were exactly as the redskins of our forests to the men of New England and the Susquehanna and the Ohio. The natives were always "thae Eerish!" and the scorn is as sharp to-day on the tongue of a Belfast Orangeman as two centuries ago. It has been said that the Ulster settlers mingled and married with the Irish Celt. The Ulsterman did not mingle with the Celt. I speak, remember chiefly of the period running from 1695 to 1741. There had been in Ireland before the "Plantation" some wild Islanders from the West of Scotland, whose descendants may be found in the Antrim "Glynnes;" they did marry and intermarry with the natives; but King James expressly forbade any more of these Islanders being taken to Ulster; anil he and his government took measures that the later settlers of the "Plantation" should be "taken from the inward parts of Scotland," and that they should be so settled that they "may not mix nor inter-marry" with "the mere Irish." The Ulster settlers mingled freely with the English Puritans and with the refugee Huguenots; but so far as my search of state papers, old manuscripts, examination of old parish registers, and years of personal talk with and study of Ulster folk -- the Scots did not mingle to any appreciable extent with the natives. With all its dark sides, as well as all light sides, the fact remains that Ulsterman and Celt were aliens and foes.

This feud made race fights, and they were bitter and bloody. And it was that kind of man-making war where everyman must be scout, and picket, and keeper of the pass -- general and private all at once. Our own story makes us too familiar with that sad, but man-making state of things. There is one sweetly fair spot in New England, where a very special training gave us very special men -- we know them as the Green Mountain Boys: there is a range where Sevier wrought that made the King's Mountain men; Ulster made at once Green Mountain and King's Mountain men out of the peaceful Lowlander, transplanted to Ulster. For years Scotland had been at peace. That peaceful Scot would not have done for our opening struggles; so the transplantation comes, and the Scot must, in Ulster, keep watch and ward. They must keep the pass. It is useless for Prendergast, Gilbert, and others to deny the massacres of 1641. Reid and Hickson and Fronde, the evidence sworn to before the Long Parliament and the memories of the people, prove the dark facts. The sword and the sickle went together in Ulster. Soon the hardy settlers had their trained bands; and we have documentary evidence that, fifty years after their landing, December 3, 1656, they could put into the field forty thousand fighting men -- many clad already in the distinctive garb of Ulster the "breakin," which was a kind of a shepherd plaid made of homespun. Already you see the peaceful Lowlander is falling behind the armed and aggressive Ulsterman. The old warriors are revived in their sons, and the forerunners of the revolutionary soldiers appear in Down and Antrim.

The fourth force changing the transplanted Scot was

The Necessity for Self-Adaptation.

There gradually arose in Ulster stronger reasons for finding out or making some modus vivendi with the native Irish. If they could not be quite warred out or worn out or worked out, then the colonists must discover some way by which they could fully hold their own with the Celt and yet be relieved from the necessity of perpetual battle. They began to try to adapt themselves to wholly other conditions from those known in Scotland. Their shrewdness was now exercised in a new direction -- the power of so far changing their fixed habits as to live alongside an alien and largely hostile race, make them serviceable, and gain from them the largest amount of help possible. The very causes that were at work on the Puritan to change him from the stolid and uncompromising John Bull into the pliant Yankee, full of his smart notions, are found in Ulster changing the overstiff Scotchman into the Ulsterman, who joins the bull-dog tenacity of the Briton to the quick-wittedness of the Celt. Under this force the Ulsterman is gaining what soon will mark him very strongly -- plasticity, versatility, nimbleness, and above all, staying power.

These four changing forces work for a time together on the settlers of the plantation, and then they are joined by another force of a somewhat different nature, but a force of the utmost value to the Ulsterman.

(This article was originally published in the Lisburn Standard on 3 January 1919 as part of a series which ran in that paper each week for several years. The text along with other extracts can be found on my website Eddies Extracts.)

Posted by an extract of reflection at Thursday, January 03, 2013