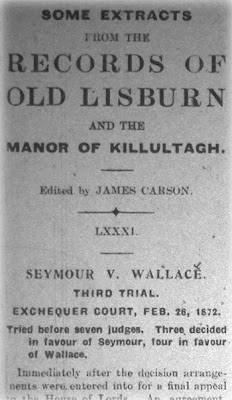 Immediately after the decision arrangements were entered into for a final appeal to the House of Lords. An agreement, however, was come to a few months afterwards between the parties, whereby Sir Richard Wallace took over the Irish estate absolutely, paying Sir George Hamilton Seymour the sum of £400,000.

in giving judgement in favour of Sir Richard Wallace, said he could not expunge from the codicil and treat as nul the expression "real." It referred to the real estate given by the will, which dealt only with the Irish estates, for the testator had no other real estate.

Had the word "real," any meaning at all?

Treating this not as a lawyer, but looking at it from the testator's position with all the surrounding circumstances, including the antecedent circumstances, he was satisfied the fourth marquis must have understood what was meant by the expression "real estate." From his education and intelligence, from his opportunities of knowledge as a member of the House of Lords, and from previous dealings with property, there could be no doubt he had present to his mind when writing the codicil that he was dealing with real as well as with personal estate.

There was evidence leading to a necessary inference that he must have perused the will. In the body of the will there was a correction in his own handwriting, introducing the word "Sir" before the name of Hamilton Seymour, and adding "Minister Plenipotentiary at Brussels." On the back of the will was the memorandum in his own handwriting, dated in August, 1848, and the date of the codicil was June, 1850, so that it might fairly be presumed he had the contents of the will in his mind when he made the codicil.

It was said he did not know the distinction between real and personal estate, but that was highly improbable in the case of a person of his rank, education, and enlightenment. It was difficult to assume that he did not know the significance of the word "real" when using it in the codicil. He (the chief Baron) could not imagine a condition of mind in which he would write "real and personal estate" without intending to convey that there was a thing called "real" and a thing called "personal estate." In the codicil he dealt with the residue of all his real and personal estates, and the only real estate given by the will was his Irish estate. The defendant, if he meant to exclude these Irish estates, must show that there was other real estate upon which the codicil could operate. It did not appear that any such other real estate existed. Therefore the testator truly described the devise of all his Irish estates to Lord Henry Seymour as a devise of the residue of all his real estate. The word "real" must have the ordinary import, unless there was something in the context to repeal that meaning.

The plaintiff was to get the real estate, subject to these charges, and what remained to him after these charges was the residue.

He (the Chief Baron) was unable to ascertain the slightest doubt that the testator did intend to revoke the bequest of the real estate to Lord Henry Seymour, and to revoke that the bequest of real estate under the word residue. True, there was no express revocation of the ultimate limitations, but they were revoked the moment there was a clear revocation of the first gift of the subject-matter of these limitations. Anything more baseless, unsupported by a single particle of fact, than the notion that the testator did not understand the meaning and effect of what he was writing in the codicil, he never heard.

He adopted the proposition that the judge could not make up his mind without reasonable doubt that the codicil revoked the will, he ought to allow the will to stand. If there was a reasonable doubt, that doubt was not to be resolved by ratiocination.

He was not at all surprised that there should be a disposition to attribute to the testator a desire to connect the estate with the family title. That was a natural sentiment in which he entirely sympathised. He was one of those who thought that the great houses which had existed for ages, or even arose in modern times, should be maintained. He was not, therefore, surprised at the desire to sustain dispositions which kept property connected with titles. But sitting in a court of law, he should fling all these consideration to the winds when he came to the great maximum of the law, that he who is the owner can dispose.

It did appear a strange thing that these half-dozen lines of a codicil should dispose of these vast possessions without the intervention of a of a solicitor to draft a conveyance, and that there should not be a resort to some of that eminent profession who had for ages aided in the disposal of property. But still he could not hold that the express words of a man of education and enlightenment should not have all the force the belonged to them according to the import of words in the English language. Placing himself, as a brother judge had said, in the position of the testator himself, when writing the codicil or called on to construe it the day after it was written, he could not entertain a doubt but that the codicil revoked the devise of the Irish estates to Lord Henry Seymour and give them to the plaintiff. He was, therefore, of opinion the judgement of the Common Pleas should be reversed, and that the verdict should be entered for the plaintiff -- Sir Richard Wallace.

delivered judgement for the defendant -- Sir George Hamilton Seymour -- affirming the decision of the Common Pleas and Assize Court.

It was said by the Chief Baron that this question should be regarded with the eye of common sense. He owned that came upon him as a surprise. It was observed that they must regard the testator as an educated man. They were asked to take up his this fifth codicil and interpret by itself. He would do nothing of the kind. He would consider the antecedent instruments and facts, and then consider the codicil and its effect on the will.

After the fourth marquis came of age, his first act was to entail and settle the estates, and all this was to be set aside by a codicil. There was no question but that the will was a clear and precise document.

There was grave doubt as to Lord Hertford's understanding of the word "real."

There was a legacy to Sir R. Wallace of £30,000, and an annuity for life to a lady of £12,000, and then Lord Henry Seymour was made residuary legatee of all the personal estate. That will remained untouched for twelve years.

He now came to the codicils, the first four of which referred to the will, and affirmed the will, and the legacy given to a lady by the fourth codicil was to go, in the event of death, to Lord Henry Seymour, the residuary legatee under the will. It was said that with these intentions, expressed over and over again, affirming the will, he suddenly conceived the idea of revoking the will and of disinheriting his brother, the heir of the marquisate.

The fifth codicil was made only seven days after the fourth.

The two great principles which governed the conduct of men in this world were love and hate. There was evidence of a growth of affection Sir Richard Wallace, but where was the evidence of any change of feeling -- of any hatred -- towards Lord Henry Seymour, to explain the stripping that brother of every acre of the hereditary estates in Ireland? Lord Hertford understood the evils of a pauper peerage, and the blessing of living in a country where a powerful aristocracy supported the monarchy. Was it to be said Lord Hertford, knowing the rank of the family, and the requirements of the title, intended by the fifth codicil to take away every acre of the paternal estates in Ireland from Lord Henry, who in the course of nature he would have regarded as his successor in the title? In his opinion the clause of revocation in the codicil did not apply to the devise in the will of the Irish estates. He had no doubt whatever but that the object of Lord Hertford was to entail the Irish estates on his family.

The codicil like this, made without legal assistance, ought not to set aside a well drawn according to established legal principles, unless that revocation was clearly and distinctly expressed.

The word "real" was in the codicil, no doubt, but did it apply to the real estate disposed of by the will? How could anyone say that this codicil, infelicitously and obscurely worded, was clearer than the limitations contained in the will? The position of the word "real" in the codicil must not be overlooked. The four first codicils dealt only with the personal estate, and it was the fifth dealt with all the real estate as well. The word "real" must be estimated by the context, and that context dealt only with the personal estate.

The position of Lord Hertford and the circumstances of the family had been overlooked in construing this codicil. This codicil should be regarded as a general devise of the residue of all the testator's real and personal estate; that would not revoke the device to Lord Henry, which was not a devise of a residue of real estate, but it would affect a gift of what had not been previously disposed of.

Chief Justice Whiteside referred twice to the length of the address delivered by counsel for Sir Richard Wallace.

And all this -- referring to the will -- was to be set aside by a codicil, which they were told was as clear as day, but which it took counsel a day and a half to obscure.

The fact that the counsel was a day and a half trying to clear up the codicil satisfied him that there must be obscurity in it.

He further spoke rather disparagingly of Lord Hertford's ability to understand the meaning of the word "real".


(This article was originally published in the Lisburn Standard on 3 May 1918 as part of a series which ran in that paper each week for several years. The text along with other extracts can be found on my website Eddies Extracts.)

Posted by an extract of reflection at Thursday, May 03, 2012