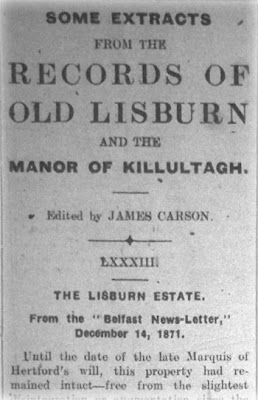 
Until the date of the late Marquis of Hertford's will, this property had remained intact -- free from the slightest disintegration or augmentation since the days of Sir Fulke Conway, who died on the 4th of November, 1624. Although gathered from two counties -- Antrim and Down -- or rather from two distinct territories, Killultagh and Southern Clannaboy, the estate was perfectly compact, "embracing as in a ring fence," says Dr. Reeves, "the whole barony of Upper Massereene, with small adjacent portions of Upper Belfast and Castlereagh." In other words, this magnificent sweep of territory was thus no less than sixteen miles, in length, from Ballymullen hills, in the County of Down, to Hog-park Point on Lough Neagh, in the County of Antrim, and ten miles in breadth, from the town of Moira, on its southern boundary, to the little village of Crumlin on the north. Within these ample limits are comprised the eleven parishes of Blaris, Lambeg, Derriaghy, Magheragall, Magheramesk, Aghalee, Aghagallon, Ballinderry, Upper and Lower Glenavy, Camlin, and Tullyrusk.

The estate, as originally granted to Sir Fulke, included only the territory of Killultagh, or Coill-Ultach ("Wood of Ulster"), which had previously belonged to a great family of the O'Neills, the chieftain of which had forfeited his lands by joining the great rebel Earl of Tyrone.

Sir Fulke Conway came as an officer in the forces sent by Elizabeth to crush the rebellion in Ulster, and in 1614 was appointed governor of the strong fortress in vicinity of Moira, then known as "Eneshaloghain," or Inislochan. Fyne Muryson, who wrote a history of the struggle with Hugh O'Neill, has the following interesting reference to this stronghold:-- "The foot of Enishlaghlin was seated in the midst of a great bog, and no way accessible but through thick woods, very hardly passable. It had about it two deep ditches, both encompassed with strong pallisadoes, a very high and thick rampart of timber, and well flanked with bulwarks. For defence of the place forty-two musqueteers and some twenty swordsmen were lodged in it. But after that our forces, with very good industry, had made their approaches to the first ditch, the besieged did yield the place to the Queen, and themselves absolutely to her mercy. So a ward of English was left in the castle, after the spoil thereof was taken, wherein were great store of plate, and the chief goods of the best men in the country, being all fled to Tyrone, and the men there taken were brought bound to the Newry, and presented on the 16th of August (1602) to the Lord Deputy."

When Sir Fulke settled in the district, after the suppression of the rebellion, one of his first and most pressing duties was to disperse the wood-kern who literally swarmed throughout the dense woods of Killultagh, and who had served in the armies of Hugh O'Neill until his surrender disbanded them and scattered them over the country to live as they best could. These, now desperate men, generally amused themselves at various kinds of games during the day, and plundered in all directions at night. One of their principal places of rendezvous was in the immediate vicinity of the present town of Lisburn, and was known as Liosnagœarbhach, corruptly Lisnagarvy, meaning the "Gamester's Fort," because the wood-kern there habitually engaged in their games and revelries. Whist Sir Fulke was meditating how he could best free himself from such formidable neighbours the difficulty appears to have solved itself simply and satisfactorily enough. The following it an old chronicler's account of the matter:-- "North-east of the town (Lisburn) there is a mount moated about and another to the south-west; these were formerly surrounded with a great wood, and thither resorted all the Irish outlaws to play at cards and dice. One of the most considerable among them having lost all, even his clothes, went in a passion in the middle of the night to the house of a nobleman in that country, who before had sett a considerable sum on his head, and in this mood be surrendered himself his prisoner, which the other considering of pardoned him; and afterwards this town was built, when the knot of rogues was broke, which was done chiefly by the help of this one man."

The following are the names of the settlers, chiefly English, who succeeded these Irish wood-kern, building and occupying the first fifty houses in the modern town of Lisburn:--


In this list we have the names of two Irish and one Scotchman, all the others being English and Welsh. Sir Fulke himself was a native of Warwickshire, but the family had also an estate in Wales and the first settlers on his Irish lands came with him no doubt from both the localities now mentioned.

Sir Fulke had that peculiar genius for acquisition and arrangement quite indispensable to a successful settler. He had no sooner got matters quieted in Killultagh than he began to look across the Lagan on the greener and more attractive fields of Southern Clannaboy. Con O'Neill was than selling off that third part of his estate which had been handed over to him as a great favour from James I. He was so beset with Scotch settlers on all his boundaries, and so tied up to let his lands to none but Protestant strangers, that he sold his property right and left to all-comers, and at fabulously cheap rates. Sir Fulke Conway soon opened negotiations with Con from his residence of Ennishalaughin, and obtained then that portion of the estate southward of the Lagan which forms a most valuable addition to the Killultagh lands, lying very snugly and compactly thereto.

At his death Sir Fulke was succeeded by his brother, Sir Edward Conway, whom old Fuller honours with a place among his "Worthies of England," describing him as having "succeeded to his father's martial skill and valour, and twisted therewith peaceable policy in State affairs; so that the gown and the sword met in him in most eminent proportions; and thereupon King James made him one of the principal Secretaries of State. For these his good services he was created Lord Conway of Ragleigh, in Warwickshire, and afterwards, by King Charles, Viscount Killultagh, in the County of Antrim; and lastly, Viscount Conway of Conway, in Caernarvonshire -- England, Ireland, and Wales thus mutually embracing themselves in his honours." This Sir Edward Conway was knighted by the Earl of Essex, at Cadiz, in 1596, and held several important public situations, among which may be mentioned those of Lieutenant Governor of the Brill, Ambassador to Prague, and Captain of the Isle of Wight. He died in 1630, and was succeeded by his son Edward, a well-known but time-serving politician in the days of the Commonwealth. He died in 1655, and was succeeded, by his son -- another Edward -- as third Viscount Conway. This nobleman was a philosopher in his generation, and, as an Irish landlord, much preferable to his father or grandfather -- devoting much time and thought, and even occasionally a little cash, to the improvement of his Killultagh property. He built two elegant and substantial mansions thereon -- one at Lisburn, about the year 1662, and the other at Portmore in 1664. The former was burned in 1707, and never rebuilt; the latter was pulled down in 1761. There was a Deer Park connected with the residence at Portmore, including one thousand acres; and so late as 1770 this magnificent enclosure continued to be well stocked, with deer, and swarmed with pheasants, jays, and wild turkeys, all of which were then rare in Ireland. This third and last Viscount Conway was created an earl in 1679, and died, without issue, in 1683. His sister Dorothy, an amiable and intelligent woman, had married Sir George Rawdon, of Moira; and it was confidently expected that their son -- Sir Arthur Rawdon -- would have been left the Irish estate at least. But by the old Earl's will, which was made only three days before his death, the whole property, English and Irish, was handed over to his cousin, Popham Seymour. Sir Arthur Rawdon disputed the will, but to no purpose. When the Revolutionary struggle came on, Sir Thomas Newcomen, of Mosstown, a warm adherent of James II., wrote to Lady Rawdon, endeavouring through her to detach her husband, Sir Arthur, from the Association of Northern Protestants, and referring in the following terms to their loss of the Lisburn estate:-- "If your husband was advised by me, he would do as he did in Monmouth's rebellion -- offer to raise men to serve the King, and by that means entitle himself to Mulgrave and Seymour's estate in Ireland, out of which he was so notoriously wronged." "Mulgrave" was the old Lady Conway, who had been previously married to Earl Mulgrave, and who had been bequeathed the Irish property during her life. Sir Thomas Newcomen's method of rectification appeared at the time a very simple one, and Lady Rawdon, would have caught at the tempting bait, but Sir Arthur wisely declined, not caring to jeopardise his magnificent Moira estate.

(Next week: The Huguenot Settlement in Lisburn.)


(This article was originally published in the Lisburn Standard on 17 May 1918 as part of a series which ran in that paper each week for several years. The text along with other extracts can be found on my website Eddies Extracts.)