The Huguenot Settlement in Lisburn 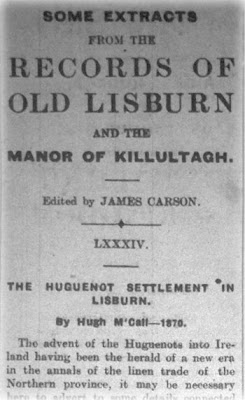 The advent of the Huguenots into Ireland having been the herald of a new era in the annals of the linen trade of the Northern province, it may be necessary here to advert to some details connected with the ancient history of Lisburn, the place chosen as the seat of their principal colony. This town, formerly known as Lis-na-Garvagh -- Anglice, the Mount of Games -- was at one time a stronghold of the famed Captain of Kill-ul-Tagh; and in that part of the town which overlooks the River Lagan and the hills of Down there may still be seen many evidences of the site of his ancient fortress. Lis-na-Garvagh seems to have been even at that day the regal centre of the estate on which it stands; and under the modern title of Lisburn -- taken after the firing of the town by Sir Phelim O'Neil in 1641 -- it still continues the capital of the splendid principality owned by the Hertford family.

The Captain of Killultagh.

Previous to that confiscation of the Irishmen's landed estates which was so general during the Elizabethan reign, the greater proportion of Ulster was held, and had been owned from time immemorial, by different branches of the clan O'Neil. Con, the elder, resided at Castle Reagh -- the seat of the king -- and ruled over a territory stretching from Con's Water, near Belfast, and including the parish of Drum, to the sea coast of Down beyond Greyabbey. Shane O'Neil owned the adjoining property from Belfast to the Antrim shore by Knockfergus (Carrickfergus) to Olderfleet (Larne) and inland as far as Antrim town. The Captain of Kill-ul-Tagh, a younger branch of the O'Neils, was famed as one of the most reckless, but certainly not least popular, member of the ancient sept.

It is remarkable that in those times the Northern chiefs and their vassals were much more turbulent under what they considered the unjust exercise of English rule than their brethren of the other provinces. Con O'Neil was more of a diplomatist than a warrior. Although he occasionally did a little in the belligerent way, still his life was one of quiet and comparative ease. The Captain of Kill-ul-Tagh, on the other hand, could not brook submission to injustice, and in most of the battles maintained against "the invaders of his country," as he designated the English, he had led the way, and displayed high capabilities as a commander of the native forces. The peasantry loved him for his generous disposition not less than they worshipped him for his deeds of daring; and among his peers he was held in the highest estimation for the chivalrous sense of honour which marked his baronial character.

In October, 1585, Sir Henry Sydney, a Lord-Deputy of the Queen, visited the province of Ulster, and in course of his tour called at the castle, or rather the stronghold, of the famous chief, for the purpose of paying his respects to him. But, contrary to the traditional character of the Irish for hospitality, the reception given to the British envoy was the reverse of cordial or kindly, and the proud representative of England's Crown felt his indignation stirred up to its inmost depths at the Celtish contempt shown towards by O'Neil. "I came to Kill-ul-Tagh," said Sir Henry, "whiche I founde riche and plentifule, after the manner of these countreys, but the Captain was proud and insolente. He woulde not come oute to mee, nor had I apt reasone to vysite him as I woulde, but he shall be payde for this before longe. I will not remayne in his debt." His words were prophetic, for in some time after that unfriendly reception the chief, who had ever repudiated Saxon rule, paid the penalty of daring to fling the gauntlet before the haughty official. O'Neil had never been very scrupulous as to his treatment of those he looked upon as ruthless invaders of his native land; but those persons had not sought to win his affection, or in the slightest degree to cultivate his friendship.

Among the commanders of the troops sent over to enforce British rule on the Northern Irish was Sir Falke Conway, a Welsh soldier of high celebrity, and who found great favour in the eyes of Queen Elizabeth because of his prowess in different battles against the Celts. After the demise of his royal mistress, the general added much to his former fame in consequence of his victory over the Earl of Tir-owen. The Captain of Kill-ul-Tagh, having joined the Earl in that campaign, was outlawed, his estates were seized by the Crown and given over to General Conway. Some years afterwards the fortunate soldier was made Governor of Ennis Loughlin, one of the last of the native forts, and which was situate at Trumra, near Moira. Sir Falke died without issue in 1626. His brother, Mr. Edward Conway, the next heir, also found favour in the side of princes. Early in the reign of Charles the First he was presented with the lands of the Derri-Volgie, in addition to the estate which obtained through his predecessor, and in the short time afterwards he was raised to the peerage.

About the year 1627 Lord Conway commenced to erect a castle on the picturesque hill commanding a beautiful view of the valley of the Lagan, and opposite the principal street of his time of Lis-na-Garvagh. A portion of the wall which formed the entrance is yet standing, on the north side of the public walks called Castle Gardens. In the Book of Travels in Ireland published by an English gentleman in 1636, he says:-- "from Belfast to Linsley-Garvin is about seven miles, and appears a paradise conferred with any part of Scotland. Linsley-Garvin is well seated, but neither the towne nor the country thereabout is well planted, being almost woods and moors until you come to Drommoare. The town belongs to my Lord Conway, who hathe there a hainsome castle, but far short of Lord Chichester's houses. Lord Conway's house is seated on a hill, upon the side whereof is planted a garden and orchard, at the bottom of the hill runneth a pleasant river -- the Lagan -- which abounds with salmon. The land hereabouts is the poorest and barrenest I have yet seen, yet it may be made good land with labour and chardage."

The Kill-ul-Tagh and Derri Volgie estates were very thinly populated when they came into the hands of the Conway family, but in a few years afterwards they had been largely colonized by countrymen of their own. Acting on that peculiar characteristic of the Briton, which, in whatever part of the world his lot may be cast, leads him, if practicable, to bring from his native hills as many people as he can prevail on to share his trials and successes, the baron induced many English and Welsh farmers to come to Ireland and settle on his estate, and that this day there are several of the descendants of those immigrants living in that neighbourhood. Among the people then encouraged to settle in that part of Ulster there was a family named Briggs, the head of which was one of the special favourites of the Baron of Kill-ul-Tagh. This man took his place daily at the foot of his masters table -- the chief and his followers dining together -- and in the direction of affairs at the castle he enjoyed a latitude of power second only to that of the chief himself. The utmost faith was reposed in the henchman, and that trust was fully repaid by earnest devotion on the part of the favoured follower. The family of Lord Conway consisted of an only child, Edward Smith, whom the celebrated beauty, Lady Harley, described in her journal as "a fine lad, very stout and very witty, learns apace and forgets as fast." He joined the British Army when he was only 18 years of age, and gained many laurels in the campaigns of those days. His father, in the meantime, had continued to reside on the estate bestowed him by the Crown, and except occasional visits to Wales he rarely left the castle and its neighbourhood. In the great hall of his mansion he maintained all the hospitality for which the ancient lords of Ireland had been famed -- a dinner was served every day, and any sojourner or wayfaring man was welcome to a seat at the table. Towards the tenants on the lands of Kill-ul-Tagh and Derri Volgie Lord Conway is said to have displayed the utmost liberality, and as his desire to witness the progress of peaceful industry was quite as anxious as had been his exultation over the triumphs of war in other days, he made favourable covenants at moderate rents with the farmers, and the latter undertook to make all improvements on the land at their own cost.

Like other of the fortunate recipients of royal patronage, Lord Conway was bound to maintain at his own expense two troops of horse and six hundred foot soldiers, all of whom were raised on his estate. These men had ample accoutrements provided for military purposes, they were regularly drilled and kept in perfect order for immediate service under the Crown.

After the death of the first Lord, Edward Smith Conway, his son, who had then attained a high position in the army, returned to Lis-na-Garvagh, and with an only daughter, took up his residence at the castle. The young lady, said to have been exceedingly handsome, were soon afterwards engaged to Colonel Seymour, an officer then commanding British troops in Antrim. This gentleman was the direct descendant of a younger branch of the house of Somerset, which owed much of its fortune to the patronage of Charles the Second. His father being celebrated as a statesman of some mark, held a good position at Court as well as in Parliament. During Clarendon's impeachment he took a prominent part in all the debates, and was himself the bearer of the bill against that nobleman to the Upper Chamber of the Senate. The marriage of Colonel Seymour was the daughter of Lord Conway had been arranged to come off on an early day, the settlements were signed, and all other preliminaries arranged, when the lady was suddenly struck down by disease and died after a few days' illness. Her affianced lover, who was cherished as a son by his intended father-in-law, continued to reside at the castle, and when Lord Conway died in 1683 it was found that all his Irish estates had been bequeathed to him. Almost immediately afterwards he took the name of Seymour Conway, and in 1703 Queen Anne ennobled him by the title of Baron Conway, of Ragley and Kill-ul-Tagh. He was three times married, and his heir -- created Earl of Hertford by George the Second -- was famed as a statesman, and in 1762 held the office of Lord Lieutenant of Ireland, Viscount Beauchamp, his son, acting as Chief Secretary. During his reign at Dublin Castle, Lord Hertford rendered very valuable services to the linen trade, and was a liberal patron of the damask manufactory, which some time afterwards was established in Lisburn. From the time of the transfer of the O'Neil property to the hands of the Conways, considerable accessions of settlers from both sides of the Tweed were made to those previously introduced as tenants on those estates. It will, therefore, be seen that at the time of the extirpation of the French Protestants the confiscating policy which preceded the distribution and plantation of land in Ulster had been nearly a century at work.


(This article was originally published in the Lisburn Standard on 24 May 1918 as part of a series which ran in that paper each week for several years. The text along with other extracts can be found on my website Eddies Extracts.)