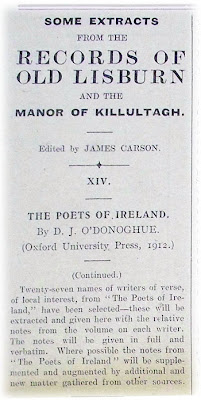 Creany, William. -- A NEW YEAR'S OFFERING, poems, Belfast, 1832. Lived at George's Island, near Ballinderry, and was perhaps a farmer.

Crossley, Thomas Hastings Henry. -- A frequent contributor of poems to "Kottabos," both translated and original, and composer of some hymn tunes. He published a translation of "The Fourth Book of the Meditations of Marcus Aurelius," 1882; Sch. T.C.D., 1865; B.A., 1869; M.A., 1871. Son of Major-General F. H. Crossley, and born at Glenburn, near Lisburn, Co. Antrim, on August 1, 1846. Educated at Royal School of Dungannon. Has been senior classical master at Trinity College (Glenalmond), and Professor of Greek at Belfast. Sixteen of his pieces are in "Dublin Translations," 1890. As a musician, he seems to be somewhat distinguished. He was a pupil of Berthold Tours.

T. H. H. Crossley, born 1846, is referred to in "Who's Who" for 1916, where there is a pretty full account of his life given. Probably a relative or descendant of John Crossley jun., referred to by Henry Bayly in his "Historical Account of Lisburn," 1834, as joint founder in 1810, with the Rev. Thomas Cupples, of the Male Free School, Dublin Road, Lisburn. Reference is also made to a legacy of £100 left by George Whitla to this school. Bayly, in verse, thus gives expression to his sentiments regarding the school and its founders --

Lisburn's free school! thy seeds of virtuous lore
Have shed their influence on a foreign shore;
So long as virtue is on earth endeared,
Thy founders' memory shall be revered;
Their patriotic acts shall win renown,
Long as philanthropy shall rule the town.

Crossley, thy worth is yet remembered well
And coming ages more thy praise shall tell.
In many a heart thy memory is enshrined,
Few like thyself on earth thou'st left behind.
When here below, 'twas thine to wipe the tear
Off sorrow's cheek -- the poor man's home to cheer --
Where lank-fac'd Poverty took her abode,
To raise Despair, and point to Zion's God.
Peace to thy shade -- the children thou hast nurst
In Learning's lap, ere thy bright spirit burst
Its bonds of clay, bless'd Crossley's honor'd name,
And live the trophies of thy glorious fame

And thou, too, Cupples, generous friend of youth
Long may you live the advocate of Truth;
Still in that path thy footsteps be inclined,
Guide of the opening and inquiring mind.
'Tis glorious work the voice of youth to raise,
A noble course was thine, to take the field
In Virtue's cause. Philanthropy thy shield
Wherever Vice with all her strain arose,
Thou wert enroll'd among her greatest foes. --
Amid the world's half-worshipp'd worthies thou
Hast won unfading laurels for thy brow.

Dobbs, Francis. -- MODERN MATRIMONY, a poem, to which is added THE DISAPPOINTMENT, an elegy, by the author of "The Irish Chief; or, The Patriot King," Dublin, 1773; THE PATRIOT KING; or, THE IRISH CHIEF, a tragedy in verse, London, 1774; POEMS, Dublin, 1788. Various other works on Irish history and politics. He was the younger son of the Rev. Richard Dobbs, and was born in Ireland, probably at Lisburn, Co. Antrim, on April 27, 1750; died, April 11, 1811. Was first an officer in the army, and finally a member of the Irish Parliament. There is a portrait and biography of him in "Walker's Hibernian Magazine" for June 1980.

Francis Dobbs was a son of the Rev. Richard Dobbs, incumbent of Lisburn Cathedral, 1749-1777. From the "Compendium of Irish Biography" it would appear that Francis represented Charlemont in the Irish Parliament from 1798 to the Union, which measure he consistently opposed and voted against. He represented a Northern Volunteer Corps, Southern Armagh, at the Dungannon Convention in 1782. Published a "Universal History" in several volumes and many tracts. Was obsessed with a belief in and exposition of the prophetical portions of the Scriptures. Frequently predicted the advent of the millennium, and proved to his own satisfaction that a Union between Great Britain and Ireland was specially forbidden by Scripture. He is said to have sunk into "unmerited neglect and difficulties " before his death.

Dubourdieu, Captain Francis. -- WILD FLOWERS FROM GERMANY, Belfast, 1850. Of the Royal Hanoverian Engineers. A native of the North of Ireland. Was a son of Rev. John Dubourdieu, the author of the "Statistical Survey of Antrim and Down."


Flecher, Henry McDonald. -- RHYMES AND RAVINGS BY A CO. ANTRIM LAD, Belfast, 1859; POEMS, SONGS, AND BALLADS, Belfast, 1866; ODIN'S LAST HOUR AND OTHER POEMS, Chicago, 1900. Born in Ballinderry, Co. Antrim, about 1840, and was first a schoolmaster at Moneyrea, Co. Down. Went to Belfast about 1866, and contributed a good deal to "The Northern Whig" and other journals, over the signature of "Coilus." Wrote one of the Burns' Centenary Poems published by Finlay and Anderson in 1859, his name being given as Henry Fletcher (and his address as Dundonald, Co. Down), and won the second prize. He became manager of a mill in Belfast in the sixties, and in the spring of 1871 he emigrated to Texas, U.S.A., where he still lives (1909). In Connolly's "Household Library of Ireland's Poets" he is included as "H. M. Fletcher."

Hancock, Thomas, M.D. -- ELEGY, supposed to be written on the field of battle, 1818; THE LAW OF MERCY, a poetical essay on the punishment of death, with illustrative notes, 1819 (both poems were anonymous.) Born at Lisburn, Co. Antrim, in 1783, of Quaker parentage. He was educated in England, and graduated M'.D. at Edinburgh in 1809. Died at Lisburn on April 6, 1849, aged 66. Wrote several works on the Friends, and medical books.

Dr. Hancock was a member of the Society of Friends, lived at Stannus Place, Lisburn, and was buried in the Friends' Burying-ground Railway Street. It is probable he was related to John Hancock, who was the original founder of the Friends' School, Prospect Hill. This School was opened in 1774 as a Boarding School for the children of Friends. Its first head master was John Gough, who published in four volumes his "History of the People called Quakers." He also compiled an Arithmetic which for many years was a standard work on the subject in Irish schools.

In the "Northern Whig," Saturday, May 19th, 1877, there is to be found an interesting account of the foundation and progress of the Ulster Provincial School to that date. Joseph Radley, the head master, in an address thus refers to Dr. Hancock: "In the year 1765 John Hancock, of Lisburn, an eminent and enlightened Friend, the ancestor of Dr. Hancock, who wrote the famous treatise on the exemplification of the peace principles held by Friends during the Rebellion of 1798. bequeathed the sum of £1,000 for the purpose of purchasing land and founding a school."

Henderson, James. -- A poet of this name, residing at Hillsborough, County Down, contributed numerous poems, signed by his initials, to " Walker's Hibernian Magazine," from 1779 onwards.

Johnston, John Moore. -- HETEROGENEA, OR MEDLEY, etc., in prose and verse, Downpatrick, 1803. A farmer, church-warden, and land-agent to Lord Moira and others, and born at Portmore Park, Co. Antrim, on December 14th, 1747. The book is very curious, and contains a lot of information about parishes and baronies in Co. Down and Co. Antrim, with lists of centenarians. There is also a long biographical account of Lord Moira, father of the eminent soldier who became Marquis of Hastings.

His life and work have already been reviewed in these "Extracts."

William Todd Jones and Colonel Sharman, in the famous struggle for electoral independence in 1783, were returned to the Irish Parliament as the popular members for Lisburn. Jones had his portrait painted by a Robert Hunter and engraved by Alexander M'Donald, a Dublin engraver.

Keightley, Sir Samuel Robert, LL.D. -- A KING'S DAUGHTER, and other poems, Belfast, 1878; second edition, 1879. Born at Belfast in 1859, and educated at Academy and Queen's College of that city where he graduated. He wrote the above poems while a student, and is since better known by his various historical novels.

Barrister and novelist. He received his Knighthood in 1912. Married -- issue two sons and two daughters. Contested three Parliamentary elections unsuccessfully -- South Antrim in 1903, as Independent Unionist; South Derry twice in the Liberal interest. Resides at The Fort, Lisburn. Has written a large number of interesting and entertaining novels, amongst them may be mentioned -- The Crimson Sign, The Cavaliers, The Last Recruit of Clare's, The Silver Cross, Heronford, The Pikemen. A Beggar on Horseback, A Man of Millions.

McCall, Rev. William. -- Published a volume of poems in Belfast many years ago, but I have been unable to obtain the title or date of the work. He was the son of Robert McCall, of Lisburn, Co. Antrim, and was born there on April 17, 1821, and graduated B.A., T.C.D. He wrote for various Ulster papers over the signature of "Lamh Dhearg." He became finally rector of St. Mary Axe, and of St. George's, Tufnell Park, London, and died on June 80, 1881.

He was the son of Robert McCall, Lisburn, by his second wife, Eliza Sweeny, a descendant of a French refugee named Peter Goyer. Mr. McCall's sister, Eliza, married Redmond Jefferson, of Lisburn, in 1841. Hugh McCall, writer of a number, of valuable books dealing with the North of Ireland, was the Rev. Wm. M'Call's half-brother.

McCall, Hugh. -- Born in Lisburn, 1805, Died in the town of his nativity, 1897. His name does not appear in "The Poets of Ireland," probably because his poems were never collected and published in book form. He is best, known for his prose works, which are a valuable contribution to the history of Ulster, and will be referred to later, in detail in these "Extracts."

The following song was contributed by Mr. McCall to the collection of prose and verse, entitled "The Republic of Letters," published by Blackie and Son in four volumes in 1841. It is given as a specimen of the verse he was contributing to various journals:--

Hurrah! -- my bark -- my ocean bird --
The Sun's broad rays are flung
Across the cliff's majestic brow,
Where eagles oft have swung --

Spread thy light pinions to the gale,
Dash thro' the foaming spray
That sparkles with a thousand hues
My bark! away, away!

Hurrah! -- the monarch of the wild
May climb the mountain side,
And gaze upon his forest-home
With freedom's conscious pride!

But liberty upon the waste
Of waters seems more free;
Strike, strike the deep-toned harp again
Thou bright and glorious sea!

Hurrah! -- again with joy I hear
The dashing of the wave, --
Sound that is welcome to my ear
As victory to the brave.

Oh! When my life's last pulse is gone,
I ask no more than this --
My requiem be the light sea-breeze!
My grave, the blue abyss!

R. A. McCall, K.C., a son of Hugh McCall, is a successful barrister living in London. Valuable articles from his pen have appeared from time to time in the Belfast and local Press dealing with the Huguenot Settlement of Ulster.

Further Notes next week from "The Poets of Ireland."


(This article was originally published in the Lisburn Standard on 19 January 1917 as part of a series which ran in that paper each week through 1917. The text along with other extracts can be found on my website Eddies Extracts.)


Posted by an extract of reflection at Wednesday, January 19, 2011