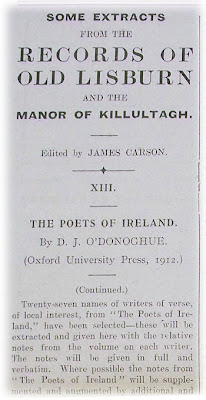 Twenty-seven names of writers of verse, of local interest, from "The Poets of Ireland," have been selected -- these will be extracted and given here with the relative notes from the volume on each writer. The notes will be given in full and verbatim. Where possible the notes from "The Poets of Ireland" will be supplemented and augmented by additional and new matter gathered from other sources.

Bayly, Henry -- TOPOGRAPHICAL & HISTORICAL ACCOUNT OF LISBURN, with a Poem on the same, etc. Belfast, 1834. A Lisburn lawyer.


Henry Bayly published in 1834 A Topographical and Historical Account of Lisburn, also a Poem on same, comprehending The Maze--A Satire, to which is added some miscellaneous pieces, etc. The volume, which runs to 160 pages, is dedicated to the Very Rev. Jas. Stannus, Dean of Ross, and to the Representative, Seneschal, Burgesses, and Citizens of Lisburn.

The volume contains a list of the names of subscribers. Fifty-seven pages are devoted to the Historical Account of Lisburn, and some eighty pages occupied with verse. The author was a clerk in a lawyer's office in Lisburn. The book will be fully reviewed later. Printers -- Thomas Mairs, Joy's Entry, Belfast.

Bultitaft, William Lyon. -- Not included in "The Poets of Ireland." A small volume of his collected poems was published in 1901 -- J. Thompson & Co., Ltd., 99 Donegall Street, Belfast -- entitled "Songs on the March." A note to the volume states -- "These verses are printed as they were left by the author at his his death. If he had lived they would no doubt have received further revision before publication."

Born in Chatteris, Cambridgeshire, in 1870. Died at Belfast in 1900. Soon after his birth his parents came to reside at Kircassock, near Lurgan; later they went to Laurel Vale, Tandragee, and again removed to Lisnoe, Ravarnette, Lisburn. At Lisnoe W. L. Bultitaft spent the greater part of his short life. He was related to the Sinton family of Ravarnette. The little volume contains twenty-five pieces, many of them showing real evidence of ability and originality. Two may be quoted as fair specimens of his work.

What is the charm that dwells among the roses
The wild sweet blossoms of the month of June?
What is the spell that this frail flower encloses,
That binds me late or soon?

The very perfume with its sweet insistence
Holds some unknown relation to my will --
Some subtle influence of a pre-existence
That clings about me still.

Some mind-controlling power that's more than mortal --
Strange impression from the silent Past --
Some hidden hand, outstretched beyond the portal,
To touch my hand at last.

O, strange bewilderment! O, curious power!
The wild, weird magic of the wild sweet rose!
The spirit-madness latent in the flower
Into my spirit flows.

Oh, is it loss or gain, our competence of sorrow?
Are we fitted any better for the way we have to tread?
From a present day of trouble shall we reap a happy morrow?
Will the future recompense us when our dreary past is dead?

Though we all may ask the question, there is none of us can answer:
We must toil beneath the burden till the end shall come at last:
Yet we trust, though sore misdoubting, as the darkness groweth denser,
That the Only One who knoweth will reward us for the past.

Brown, Rev. W. Wallace. -- CHRIST THE LIFE OF LIVES, with other poems, Belfast, 1887. Preface is addressed from Brookhill, near Lisburn.

William Wallace Brown was born at Brookhill, Lisburn, in 1849, and died unmarried in the same place in 1891. He went out out as a missionary with the Presbyterian Church in 1874, returned home in 1882, and then visited Australia on account of his health, where he remained was a son of the Rev. J. S. Brown, who was Minister of Magheragall Presbyterian Church for almost half a century. Some members of the family still reside at Brookhill. His book of poems, published in 1887, runs to 72 pages. There are 13 pieces, all chiefly of a religious nature. One piece occupies 40 pages of the volume, and is a life of Christ in verse.

Campbell, Thomas. -- LAYS FROM LISNAGARVEY. Belfast, 1884. Was a millworker, born at Lisnagarvey, Lisburn. Wrote to local Press over signature of "Pat M'Blashmole."

Thomas Campbell was born in Sandy Row, Belfast, 15th June, 1855. His family removed to Derriaghy, Lisburn, in 1857, where they remained some five years, thence to the Low Road, Lisburn, in 1862, where he has resided since. His educational training, which was necessarily limited, was given in the first instance by Mr. John Richardson, Tullynacross National School, County Down, and later by Mr. Samuel Hull, Market Square Presbyterian Church School, Lisburn. At the early age of eleven years he entered the employment of William Barbour & Sons, Hilden, and has in this year (1916) completed a half century's honourable work in connection with the Hilden firm. He was one of the founders of the Lisburn Co-operative Society, Limited; was its first treasurer, and was president of the society from 1892 to 1899. He served on the committee for twenty-five years, and was closely identified with the early struggle of the Society, and during the period of its early prosperity. Mr. Campbell was initiated into the mysteries of Free Masonry in St. Patrick's Lodge, No. 602, Derriaghy, in 1877, and has ever since taken the keenest interest in the Masonic Order. He still maintains his connection with his mother lodge, and is in addition in fellowship with numerous other lodges in the neighbourhood. He is also closely associated with the Orange Institution. In 1884 he issued a book of poems entitled "Lays from Lisnagarvey," printed by John Reid & Co., 20 Linenhall Street, Belfast. The volume contains some 66 pieces. In the introductory note to the book he states -- "They were composed by a mill operative in his leisure moments, who from boyhood has been nurtured among the whirl of belts and the din or machinery -- no enviable situation for the cultivation of the Muses." Between 1884 and 1900 a large number of poems from his pen appeared in the "Lisburn Standard," but have never been collected into book form, and it is to be feared are now irretrievably lost. Many of his poems dealt with Masonic subjects. A song, entitled "Derriaghy," published about 1898, may be quoted.

There's a place called Derriaghy,
And I'd have you all to know,
Whene'er the stated time comes round,
'Tis there I love to go
Where a lodge of right good fellows meet,
Who wear the red and lue [sic];
And friendship sits enshrined within
Hearts that are kind and true.

Chorus --
Of all Masonic Lodges,
'Tis the best one that I know.
It is there the finer feelings
Of our natures ebb and flow.
You may talk of other lodges.
And may think they're up to Dick;
But the lodge in Derriaghy.
Beats the whole rick-ma-tick.

Our Lodge is called St. Patrick's --
'Tis a highly honoured name,
That on the roll of Masonry
Is not unknown to fame.
The day-star of our Order there
Is shining very clear,
And the genius of Masonry
Is hovering very near.

The mysteries the Masters taught
In ages long ago.
Which none but proved craftsmen
Of our Order e'er may know,
Are seen in all their splendour,
In their wisdom, strength, and might,
While beauty sheds a lustre
Like a halo of delight.

There you may see the meaning plain
Of Faith, and Hope, and Love --
Masonic lights that brilliant shine
Like stars from out above;
Strong Faith in the great Architect,
And Hope in power to save,
And Love that lives for brothers true
For aye, beyond the grave.

Now there's a lodge Eternal,
Far beyond this world of woe,
To which by truest merits' claim
We hope at last to go:
And there, beneath the Master's eye,
As in the days of yore,
It shall be a Derriaghy
And St. Patrick's evermore.

'Tis there the snowdrop early rears
Above the snow its blossom, O;
The tender flower is not more pure
Than the heart in Bessie's bosom, O.
Her witching smile that charmed the while,
Her teeth like pearls disclosing, O;
Her every charm did my heart warm
At many a daylight's closing, O.

Around that place fond memory strays,
Recalls each bush and bramble, O;
A charm still lingers there always,
Where Bess and I did ramble, O.
Each sweet retreat and verdant seat.
Where oft we held our meeting, O;
Each bosky dale, and leafy vale,
Reminds how time is fleeting, O.

Since then we've wandered side by side,
With hand in hand together, O;
Contented down life's stream to glide,
'Mid fair and cloudy weather, O.
But memory still, through good or ill,
Wherever time shall find us, O;
Of many an eve in Maghraleave,
Will evermore remind us, O.

Young Kathleen was bonnie, young Kath was fair,
And bright were the braids of her brown silken hair,
That around Paddy's heart wove a magical chain,
Made him sigh when away to be with her again.

Kathleen, though bewitching, inclined Pat to tease,
And Patrick, so loving, tried Katty to please;
The maid was so shifty, enchanting, and coy,
That Pat found much torment mixed up with his joy.

One evening, when seated in a sweet, verdant lane,
O'er head birdies twittered an am'rous refrain;
'Mid sweet hawthorn blossoms that I scented the vale,
Young Pat mustered courage to tell her his tale.

First his face reddened up, then his hair gave a tweak,
Something stuck in his throat e'er a word he could speak;
Then in desperation he whispered, "Ah, Kate,
"Shure I mended the rail where the cow broke the gate."

Her bright eyes were sparkling, she saw something wrong,
Then murmured, "Dear Pat, did the job keep you long?"
"An hour," next he muttered. She said, with a laugh,
"Shure any gossoon could have done it in half."

Pat's confusion increased, his face was a sight,
As over it quickly the red chased the white;
Then, growing quite calm, whispered, "Katty, my dear,
"How happy the birds all around us appear.

"How blythely they're singing this bright summer day!
"Ah, Kate! could not we be as happy as they?"
She knew his heart spoke, so earnest his tone,
And the time had arrived her heart's love to own.

Then timidly, bashfully, she hung down her head,
And "We could be as happy," she murmuring said;
Pat's heart gave a flutter, his arm clasped her waist,
Then her head in submission sank down on his breast.

His emotions, his feelings, what pen could express,
As he asked her a question to which she said "Yes."
The birds sang more sweetly, the sun brighter shone,
As in rapture he pressed to his bosom his own.

The hawthorn still blossoms, the grass is still green,
And down in that loaning fond lovers are seen;
Some hopes are deceived -- others, joy gilds their life,
And live afterwards happy, like Pat and his wife.

More "Extracts" from "The Poets of Ireland" next week.


(This article was originally published in the Lisburn Standard on 12 January 1917 as part of a series which ran in that paper each week through 1917. The text along with other extracts can be found on my website Eddies Extracts.)


Posted by an extract of reflection at Wednesday, January 12, 2011