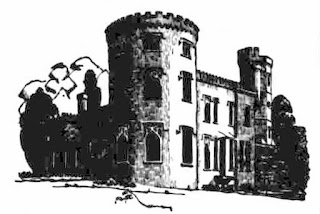 There’s history in these crumbling walls

JOURNEYING inland from the tempestuous beauty of the Antrim coast, beyond the isolated farms, and tiny cottages which lie so snugly sheltered in the curve of the hills, you find Kilwaughter Castle.

The main gateway is gauntly barred with barbed wire, but, on ascending the “brae," darkened even in mid-afternoon by the great trees that overhang the walls, you find an overgrown driveway that leads, uninterrupted, to the deserted dwelling.

Primitive earthwork, Norman motte, Elizabethan bawn, Georgian round tower — this castle is almost a history book in itself.

When the brother of Robert Bruce landed at Larne in 1315 he destroyed all the Norman settlements, and, assisted by O'Neills, M'Sweeneys, and M'Donnells, he left "neither field of corn undestroyed, nor town unsacked, nor unfrequented place, were it never so little nor so desert, unsearched and unburnt."

The marauders failed to destroy the Norman motte upon which the original castle stood, and it can still be seen in the Kilwaughter demesne. The Norman family name remains, too, but in a changed form. D'Agneux became Agnew, and Agnews were still living at Kilwaughter at the end of the nineteenth century.

Another castle rose on these lands, still a strong-walled dwelling, for fortified houses were needed in Ulster long after the need for them had passed in England.

A dark mantle of ivy covers the broken walls of this later bawn, but their strength is evident even in ruin. Their rough hewn granite ends in purposeful battlements, very different from the decorative crenellations that surmount the smooth walls and round tower of the later mansion.

These later additions were built at a time when it was fashionable for every feature to play its allotted part in an architectural composition. This desire for uniformity is seen in the shape of the windows in the round tower:    they are all hooded to match those of the earlier period.

In later years, larger windows of the more generally recognised Georgian type replaced these matching hooded ones in the reception rooms on the lower floor of the tower, probably to give a better view of the little lake that can be seen where the velvet turf ends in a grove of trees.

For a little while longer this old castle sleeps on, its proud old walls, weathered to darkness by the winter winds, and warmed to greenness by the summer suns of centuries past, have outlived their usefulness

Soon only the placid waters of the little lake, giving back the green tracery of spring and the gold tracery of autumn as Nature's cycle is repeated in the overshadowing trees, will remain to remind us of the storied home there once was here.