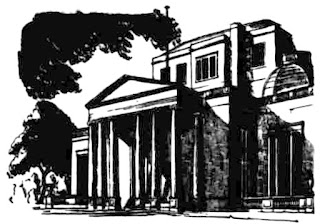 In 1772, three years before the Americans began their War of Independence, there returned from India the richest “nabob” that Ulster has known, James Alexander. James, son of Nathaniel, an alderman of Derry had seen service with the East Indian Company, both on the coast of Coromandel and at Fort William. Still only 42 when he returned, James Alexander became one of the greatest landowners in the country, purchasing the Caledon estate from the extravagant son of the 5th Earl of Orrery

The estate of Caledon, or Kinard as it was anciently known, has changed hands more than once in the last three hundred years. The lands were granted, in 1605, to Sir Henry Oge O'Neill, and, later in the seventeenth century, Sir Phelim O'Neill, who held Co Tyrone against the English, had his headquarters there.

When Charles II came to the throne the estate was in the hands of the authorities, and in 1660 a King's letter instructed the Lords Justice to give to Capt. William Hamilton "satisfaction for all his arrears” out of the lands in the barony of Dungannon.

Captain Hamilton's granddaughter, heiress of the Caledon estate, became the second wife of the Earl of Orrery, and it was her son who sold his inheritance to James Alexander.

James married Ann, the daughter of James Crawford, of Crawfordsburn, and, wanting a house in keeping with his wealth and position, he commissioned Thos. Cooley to design the Palladian mansion that stands in that vast and beautiful 800 acres which comprise the Caledon lands.

Caledon House follows the fashion of its era, when even country builders knew enough of the orders and details of antiquity to be able to reproduce a miniature Pantheon.

The Interior of the dwelling is in the true Adam style every detail being in perfect unity. To preserve the contours of the oval drawing room. for example, even the doors and mantels are curved.

James Alexander and his comely bride were, however, destined never to reside together in this classical replacement of the old house, for Ann died before the house was completed, leaving an infant son. After her death her husband devoted himself almost entirely to his Parliamentary duties. As a reward for his zeal in public office he was created a Viscount in 1797. Three years later he became an Earl.

When his son inherited the estate in 1802, the classicism of the Georgian period was at its zenith, and the 2nd Earl commissioned the great John Nash to design the enlargement he had planned.

This grandson of Alderman Alexander's was a model landlord in those days when philanthropy was not generally to be found. His relations with his tenants were of the happiest; he built model cottages, laid out the town of Caledon, and erected the pleasant Court House, at a cost to himself of some £3,000. So beloved was he by his tenants that at his death a handsome column was erected in the demesne, paid for by public subscription.