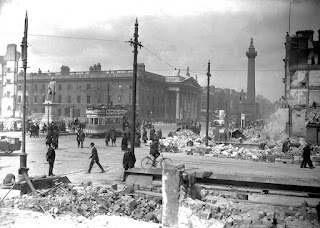 We use this phrase advisedly in order not to give the occurrences that have taken place in Dublin this week the dignity of rising or a rebellion so far as dignity can be associated with an Irish Nationalist upheaval. Some of the darkest chapters and the darkest phases of Irish history are associated with rebellions. We have had what are called risings as well as rebellions, and there has seldom been a long period in our national history that has not had a record of one or other. Within modern history, and within modern memory, we had the Cabbage Garden rising or rebellion of Smith O'Brien in '48, and we had the Fenian rising of '66. So far as any practical results were concerned both ended in fiasco, and were more subjects for ridicule than for serious consideration from an historical or practical point of view. What we have designated Dublin disturbances are much more grave and serious than either of those, and represent an extent and power of organisation which distinguish them from their two immediate predecessors. Both represented hours, but this represents days of defiance of authority and the assertion independence from Britain. We have had the Post Office and Stephen's Green Park and the hands of the rebels. We have had them entrenched in Stephen's Green. We have had them on the admission of Mr. Birrell, the so-called Irish secretary, in command of four or five points of Dublin. We have had soldiers and policemen shot at by the rebels and over a dozen deaths of uniformed representatives of British authority, who seem to have been the favourite objects of the rebel attack. We have had railway, telegraphic, telephone, and postal communication with the Metropolis practically stopped for three days. Dublin and Belfast have been as much isolated from each other as if they had been separated by countless miles of desert. We have had thousands of troops dispatched to Dublin as if it was a new theatre of the great war. We hear of places occupied by the rebels, and we hear of some of them being retaken. We hear that the Post Office and the Great Central Park and thoroughfare have been in the hands of the rebels for at least a couple of days, and we hear that they have been recaptured. We hear that a British gunboat has been shelling Liberty Hall in Dublin as if it was in an enemy's country, and of the soldiers having gained possession of it, as we might read in a report of some developments in France and Flanders. We are told in Parliament that the rebels have got command in certain cases, and that eleven insurgents have been killed. Disturbance is a mild epithet to apply to these proceedings, but when we remember that they all occurred and what Mr. Asquith once described as "the one bright spot in the kingdom," we do not like to make any reflection on Mr. Asquith as a prophet or Premier by suggesting such terrible suggestive words as rising or rebellion in a country which he so highly appreciated, and for whose rebellious elements he has done so much.

It may be asked how and why, in a country like this, such movements could have been developed or could have been permitted to be carried so far. It may be asked were were the authorities, where were their secret service agents, how was it possible, with anything like an efficient Government or an efficient staff in control, this could not have been prevented or checked earlier? It may have all come as a surprise on the authorities, but that something was brewing and preparing for Easter was as well known, or at least as generally anticipated, as was the German war by all outside Government circles before the declaration. It was known that the Sinn Feiners, the Irish volunteers, were organising great demonstrations over the country on that day, and all who had understanding of the signs of the times warned the authorities they should be prepared, not after the event, but before it, to deal with it. The authorities had been appealed to time and again to deal with the Sinn Feiners and the Irish Volunteers, who were carrying on not only a crusade against recruiting, but a crusade against everything British in the country. But the Government took no notice. Mr. Redmond had asked or demanded that nothing should be done to interfere with the Sinn Feiners on the professed ground that they were an insignificant and negligible body, and it would only advertise them or bring them into importance to interfere with them. As in duty and by habit and custom bound, the Government did not interfere. They let them go on and conspire, as the British Government let the Germans and pro-Germans do before the war. Then, like a bolt from the blue, came on Tuesday the news that a German warship, disguised as a merchantman, filled with arms and ammunition, had arrived at the Irish coast, with Roger Casement on board, and that he had been arrested and the German boat sunk – we since learned that the Germans sank the vessel themselves. About the same time we heard mysterious rumblings about an attack on Dublin, about the seizure of the Post Office and other Government offices by rebels, the hoisting of the flag of the Irish Republic over these buildings, and of soldiers being deliberately shot on making their appearance in uniform in the streets. Gradually the facts, or at least such of them as it pleased the authorities to make known, were published as summarised above. And the danger is not over yet, and, if unofficial reports can be credited, is increasing.

Now, the first and most natural question is, what should be done to the Government that either remained ignorant of this, or allowed the movement to reach such a head? But a question behind that is, have we or have we had a Government in Ireland at all for years? All we do know or have known in regard to government in Ireland was that whenever Mr. Redmond asked was granted, whatever Mr. Redmond wanted protected was protected, whoever Mr. Redmond wanted to escape liability from serving the Empire was accorded the privilege. In fact, the government of Ireland seems to have been in the hands of Mr. Redmond, and we now see the mess that has been made of it from a British point of view. We have learned from statements that he made in the House of Commons that Mr Birrell is still Chief Secretary of Ireland. We have known and heard a little of him of late that we had forgotten his very existence, and no more thought of associating him with the government of Ireland than with the government of Timbuctoo. But having been allowed to make the official announcements, we may understand that he is still at least nominal Chief Secretary. But what is worse. He told the House of Commons the other day that he was coming over to Ireland himself. His previous presences in Ireland were generally associated with some surrenders to Nationalists and some sacrifice of Unionists, and it must be painful and paralysing to think that we are going to have him amongst us at this crisis. His position as an absentee Chief Secretary was bad enough, but his interference as a resident Secretary is, if possible, more alarming. But we have had to suffer much for our sins, and we suppose we will have to accept this additional suffering.

Now, we are not prepared to state openly that Mr. Redmond was dishonest or insincere in asking for tender treatment to the Sinn Feiners. We are prepared to admit the Sinn Feiners have one fist for the British Government they have another for Mr. Redmond. But we are prepared to say that one of the reasons for Mr. Redmond's desire for tenderness to the Sinn Feiners was this, that he knew, while professing that they were negligible, that they were really more powerful, numerically and otherwise, than his own followers, and he knew that any action taken would reveal that fact. As he had made his position by humbugging and deceiving the British public, and especially the British Radicals, he meant to do it to the end. And in that as in other respects the Irish Government gave him every assistance and encouragement. It is possible later on he will make capital as to the elements he had to fight against, and as to what he did to repress them. Now, we do not for one moment suggest that Mr. Redmond, like many others of his nominal followers, is gloating over what has taken place and then humiliation of the British Government involved. We can quite understand a sense in which he might feel that it might "his game," and insofar he would be thoughtful. But as we have all along maintained, there is very little to choose between him and his followers and Sinn Feiners. Both want rid of the British Government and its controls; both want Ireland to be free, in the words of some of the leaders, from the earth to the air. The only difference to our mind between them is that the Redmondites hope to use Home Rule as a preliminary to complete freedom afterwards, whether in the form of an Irish Republic or not we cannot say, while the Sinn Feiners do not believe in taking the two bites of a cherry, and want to secure their Irish Republic without the hypocrisy of the preliminary stage.

It is impossible to make any separation between the preparation for the landing of arms and ammunition on the eve of Easter Monday and the occurrence of Easter Monday. It is equally impossible to believe that the body that planned and organised it all is the negligible body Mr Redmond would have had us and the Government believe the Sinn Feiners were. How far German gold and German brains help the rebels we are not prepared to say, but there can be no doubt that it was all planned and arranged in conjunction with the Germans, and that the Germans hoped for great results from this emeute. Though they may not gain all they expected they have gained more than we could have wished. They have gained the opportunity of circulating in their own country and throughout the neutral word that there is that there is an Irish uprising against the British, and they have rendered it necessary to send thousands of troops to Ireland that might have been desirable or necessary for the front. That is all painful and humiliating enough, as it is painful and humiliating enough for us to have to write as we have done in regard to what is supposed to be the British Government in Ireland. But we cannot do it otherwise. They should not have allowed this movement to get ahead at all, and if they allowed it to raise its head they should have been prepared to crush it more rapidly than they have done. We refrain from any comment on the effect of all this on the future of the country. Sufficient for the day is the evil thereof. And the state of things in Dublin, and, we fear, in other parts of the country also, is sufficient to fill our thoughts and increase our anxieties for one week. Though it is a trite saying we cannot help using it again – the Government has some dragons teeth, and they have sprung up armed men. And the men and the arms seem to remain in more or less potency till the hour of writing.


Posted by an extract of reflection at Wednesday, April 27, 2016