Belfast Doctors at the Front 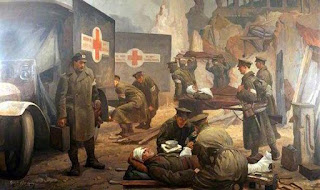 Writing to his brother (Rev. W. A. Wilson, M.A., Coleraine) from the Y.M.C.A. quarters somewhere with the British Expeditionary Force, Rev. George Wilson, B.A., of Ballygoney, in a recent letter, describing an entertainment in one of the huts, wrote -- The concert and play were being given -- the one by the nurses, the other by the male staff of the St. John's Hospital. The hut was a wild scene. It was crowded beyond description. There were six ladies in the first half -- a sort of troupe -- who sang and tripped about most daintily. One of them recited very well. The second half was Gilbert and Sullivan's "Trial by Jury," and was simply great. The get-up of the men in itself was enough to set you into a roar, and when the jurymen got into the box and carried on their antics laughed till my sides were sore. The judge was a superb get-up, and his singing and acting were the same. At the close I went round to the dressing-room to see the men, and I asked to be introduced to the judge that I might congratulate him. He was disrobed by this time, and dispainted, and when he turned round where he stood pitting on his boots who should it be but Dr. Percy Crymble! That started us to talk! Crymble asked me to go in and see Tom Houston at work on his laboratory, and there I found M'Cloy. another Belfast man. It was delightful to see the old familiar faces, and to find them all doing such fine work. I began to move towards home about 10-30, refusing Tom Houston's invitation to remain till 11-30 to see the arrival of a convoy of wounded. Half-way towards home, however, I had to pass the "Walton" hut, which lies at the foot of a steep railway embankment, and we were able to wait with Corkey until we saw the ambulance train come past to the siding. Grisson had his lorry, and we motored up the hill to the hospital.

When I searched out Dr. Houston, where he pored over his microscope, I found yet another Belfast man -- Dr. John E. M'Ilwaine, the officer deputed to receive the convoy. M'Ilwaine took me up to the receiving shed, and showed us all the arrangements for the various kinds of cases -- the undressing and bathing and redressing rooms for the "sitting" cases, and the stretcher carriers for the lying-down ones. The R.A.M.C. men were all sitting about, awaiting the order to fall in on the approach of the first ambulance. On a table in the undressing room one of them was asleep. He woke up and rose when we entered, and who should it be but our friend "Angelina," out of "Trial by Jury" -- a gentle-looking lad who made up into one of the loveliest women I ever saw! We had just finished a hurried round when the signal was given, and all the men stood to their posts. The clerks sat two and two behind each of four small tables. On the opposite side of the table were the trestles for receiving the stretchers (in the trestles let-down seats were fixed for men able to walk). The man who had worn the kilts, the Scotchman of the jury, was at the door with notebook in hand; his work seemed to be the noting of the number of blankets on each stretcher as it was unloaded, and then attending to any kit the men had with them. The officers were all assembled.

When I was introduced to Major Trimble, the senior on the spot, and congratulated him on his fine collection of Belfast specimens, it was to be told he was himself another old Instonian! With him was a very gentle, quiet man, Major Smith, the chief surgeon. The first thing that struck me was the healthy look and cheery spirits of the men. They had not all been wounded -- some were suffering from trench fever, one or two from tubercular troubles. One man with trench fever had been in the landing at Suvla Bay. On a board hung discs showing the number and place of all the vacant beds. The doctors gave the orders for the locating of each case; a disc was taken off the board and pinned to the man's coat, and then two men brought in the light hand-carriages, and in silence the stretcher was laid on and wheeled off. The officers were every one most kind to us. Major Smith asked us to follow one case to the ward. We were in the ward in a few moments, and the sight we saw would have touched the hardest-hearted. The electric lamp was covered with red muslin, and the ward was all dim and silent. The sister in charge came noiselessly down the ward to meet the stretcher-bearers. Then two of them and the ward orderly lifted him on to the clean white bed. He stretched himself, poor chap -- it was a long time since he had lain on a bed like that -- the sister and the orderly took charge, and we went out again. And so silently had all been done that not a single patient moved in those two long rows of beds. But all the cases were not like those first four. Soon I noticed a man whose face was blanched and bloodless. Major Smith moved over and lifted up the edge of the blanket -- one leg amputated! In another ambulance came two cases with bandaged head and eyes. One was marked "Urgent" by a label pinned to the bandage. The other had no label. The oculist was in the shed along with the other officers. He came a across, peeped under the bandage of this second man, replaced the bandages, and then turned round and said to us, "That man will never see again." He then came up to the "Urgent" case. The man was singularly cheery, and was giving out his name and number in fine style. The oculist looked at one eye and told the man that it did not seem so bad. "That's right, sir. They fixed me up champion yesterday, and I'm all right now." And so on all through the thirty-two cases. The discipline and arrangements were perfect.

In Houston's laboratory (at its snug little stove) followed one of the evenings of my life. I happened to start them on the bacteriological problems caused by the strange conditions of the war, and the four men proceeded to hammer out, each from his own point of view, the various theories that had been propounded in answer to them. The most striking thing said was by Houston at the very outset of our talk -- namely, that we are back again one hundred years, and facing the problems our forefathers had to face a century ago. The two main problems, they said, wore those caused by secondary haemorrhage and by gas gangrene. The talk then turned wholly to the haemorrhage question, and it was an education to hear those fellows talk.


The surgeons cannot explain the bleeding which is following in so many cases after an operation has seemed for a time to be most successful. Houston is trying to solve it from the bacteriological side, and is inclined to think that the time that elapses before the bleeding is "the period of incubation" of some miscrobe. Crymble, on the other hand, ascribes it to some surgical shortcoming, and is at work on it with X-rays and dissection. M'Ilwaine is, of course, a medical man. It was a great treat to sit by and hear these skilled exports talk. Cases were quoted and, looked up, and at one stage M'Cloy prepared a miscroscopic slide to illustrate some point that had been raised. The talk went on in the laboratory till about 11-30, and then when I rose to get home Crymble asked me to go and see his X-ray apparatus. Houston came with us, and that meant another interesting hour. We scarcely glanced at the apparatus; but Crymble showed us some of his most interesting plates, fixing them in an ingenious arrangement of mirrors in order to bring up the stereoscopic effect of the plates -- the photos are all taken in stereoscopic pairs. All were interesting; but perhaps the most wonderful was one of a brain injured by a bullet that had grazed the cranium and driven some of the bone into the brain. The wonderful thing was that Crymble was able from his photo to diagnose the presence of gas gangrene. (Gas gangrene has nothing to do with asphyxiating gas, but is the old name for gangrene which gives off gaseous matter). The insertion of a tube proved Crymble to be correct. Altogether I came away feeling very proud of my fellow townsmen and the fine work they are doing.

Posted by an extract of reflection at Tuesday, April 05, 2016

Email ThisBlogThis!Share to TwitterShare to FacebookShare to Pinterest
Labels: ww1