To the Ulster Volunteers 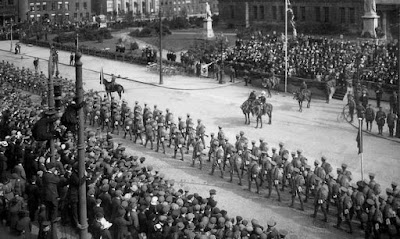 Ye brave, brave sons of Ulster, who rallied to the call,
Left your friends and peaceful homes and sacrificed your all.
To meet and fight — and put to flight — that grasping cruel foe
Who has caused grim desolation, and heartache, pain, and woe.

Courage, boys, courage!—
Be this your daily cry;
But don’t forget to “trust in God,
And keep your powder dry.”

For many years the Germans had been making deep their plan;
Had worshipped militarism, had drilled their every man.
While other peaceful nations thought them cultured, honest, true,
The Germans forced this awful war like startling “bolt from blue.”

Then gallant little Belgium had first to face the foe;
Her land was devastated, her precious shrines laid low.
What cruel, sad atrocities were daily practised there
By the Germans, in their bitter hate — ah! the thought is hard to bear.

But Britain, to the rescue, came — France, Russia, Italy, too;
Supported by our Colonies — brave-hearted, leal, and true.
To conquer wrong, uphold the right, and make the weak ones strong —
With this as glorious motive, may great power to them belong.

Our Ulster Volunteers set out; with ready pluck and vim
They joined the Empire’s army, to fight for home and King,
To show to all the world they were patriots, staunch and true,
And to uphold the grand old flag of red and white and blue.

Brave boys from Aghadowey, we’ve a special word for you,
We have known you from your childhood, we have seen each in his pew
Listening to the Word of Life, joining in prayer and praise;
And now we pray that God may give “strength equal to your days.”

And when the strife has ended, and fearful war is o’er,
You’ll have a warm, glad welcome back to your native shore,
You’ll tread once more the valleys where the little shamrock grows,
And gain new health and vigour ’mid Ulster’s calm repose.

We mourn those noble soldiers who’ll return, alas! no more.
They’ve “crossed the bar,” and landed upon the other shore.
But if Christ has been their Captain, they inhert full reward,
And their dust will rest in foreign land, as in the old Churchyard.

We thank our noble Army, we thank our Navy, too;
But, more than they, we thank our God, to Whom all praise is due,
That He kept the heartless Germans, despite their craft and guile,
From invading and destroying out own beloved Green Isle.


Posted by an extract of reflection at Thursday, February 18, 2016