The Housing of the Working Classes 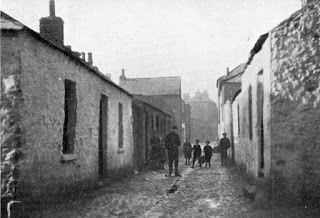 Few, if any, social questions in the past few years have forced themselves so irresistibly on public attention as that of the housing of the working classes. This has been done without any of the agitation that usually accompanies political issues. The housing question is free of all colour of creed and party, and appeals for its solution to men and women of every class alike.

Down to our own day it may be said that in most countries town planning, as now understood, did not exist. Mediaeval towns grew round the citadel or stronghold, and were enclosed within walls or protected by some natural lines of defence. As they extended, with the growth of civilisation and the advance of more peaceful times, the difficulties of housing the increasing population have taxed the best energies of communities everywhere. In rural districts the peasantry in many countries are still housed in a primitive and haphazard fashion. In Ireland, until recent years, the agricultural labourer lived under deplorable conditions; but thanks to the Labourers Acts of the past 25 years a vast change has been made throughout Ireland, in providing proper housing accommodation for the rural population. The Clancy Act (1908), the last and most generous, provided 4¼ millions, and now some 50,000 dwellings have been erected as the result of this and the previous most useful measures. The State grants 36 per cent, of this fund, and the 64 per cent, falls on the rates, set against which are the rents paid by the occupiers. The repayment extends over a period of 68½ years at 3¼ per cent., which covers interest and sinking fund; the Rural Councils are thus in the happy condition of being able to borrow money at the low rate £2 1s 7d per cent. As far, therefore, as the agricultural labourer is concerned the evil conditions under which he so long existed will soon be a thing of the past.

But the housing conditions in the old cities and towns remain pretty much as we have always known them, a disgrace to our common humanity, to our civilisation and the century in which we live. There is no beneficent measure, such as the Clancy Act, for the Urban Councils to take advantage of, and the ratepayers are unequal to the burden of borrowing at the present rate of interest under which loans can be had. Were a full report of the housing conditions of the urban districts in Ireland possible, the number escaping censure and criticism would be few indeed. An Appendix to the Report of the recent Housing Commission in Dublin gives interesting extracts from statements submitted by certain urban authorities, who are making what efforts they can to meet the needs of the working classes. The extracts are painful reading:— "The need in Limerick is a crying one." In Waterford "there is an urgent and genuine want for the erection of suitable houses." In Arklow an outbreak of typhus in 1910 broke out in a slum district, and the medical officer "could prove justification for the levelling of 100 houses." From Clonmel the borough surveyor says – "The houses are overcrowded, old, badly constructed, badly lighted and not ventilated . . . the housing of the working classes is bad, so bad as to menace the health of the town and to call for instant remedy." Drogheda has erected 116 houses at a loss to the rates of 1¾d. in the pound, and about 800 more are required. In Dungarvan 45 have been built and 300 more are needed; the present condition of the occupied houses "as regards room, light, air and sanitary arrangements is most defective." The sub-sanitary officer's report of this town, taking street by street, is instructive; and a sad light would be thrown on the condition of Irish towns in general, if reports on them were presented in the same business like way. Kilrush, with rates at 7s. 3d. in the pound, can do nothing; and here "the housing compares favourably with the lowest slums of Dublin for insanitation"! In Mallow, notwithstanding the Council's efforts, "lanes, houses, and conditions condemned as insanitary still prevail." In Nenagh "the housing accommodation is altogether inadequate and unsuitable for the unskilled labourer, who constitutes about 90 per cent, of the working population." The report from Sligo is interesting, where the "poorer classes in the outskirts are housed under very bad conditions." The report is illustrated by half a dozen plates; and there are few towns in Ireland which could not show similar views of the low, thatched, single storeyed cottages with which we are so familiar. The particulars of these cottages indicate how, in general, every known sanitary law is violated within their disease-infected walls. But enough examples have been given to show that the cry for housing reform in the urban districts throughout Ireland is an "exceeding bitter cry." The reason urged by one and all is that, the ratepayers cannot bear the burden, as the terms of repayment is too limited, and the rate too high. The Housing and Town Planning Act of 1909, which extends the repayment of loans over a period of 80 years, does not apply to Ireland. The Local Government Report for England (1913) shows how satisfactorily the Act is working, and the general advantage the local authorities are taking of it throughout the country. So active have they become, it is stated that preparations of schemes are being made in many places under the Town Planning Section of the Act, comprising tens of thousands of acres. Perhaps in a generation or two the unsightly cinder heaps and forests of chimney stacks, now never out of sight, will stand far apart from the homes of the working classes in industrial England. 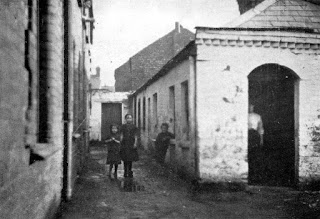 The housing of the agricultural labour in Ireland under favourable conditions followed as a natural sequence to the Ashbourne and Wyndham Land Purchase Acts, and the difficulty of acquiring sites and ascertaining titles were easy in the transfer of the land. But in urban districts these are not easy matters; sites are limited, many interests may be involved, and the investigation of titles may prove a long and costly undertaking, with the necessary compensation in the ultimate purchase. Added to these is the clearing of the sites of tumbled down or condemned dwellings, so that the initial cost before the foundation of a single house is laid may prove an insuperable difficulty to a necessary housing scheme. Vacant spaces where houses once stood should be compulsorily acquired by the Urban Council, and derelict and condemned houses, which the owners refuse to rebuild or put in repair, after a period of a very few years should be similarly acquired. This may sound like "rank Socialism," as indeed the whole housing question is to some. It is quite true that to-day too much is demanded of the State, and that there is a real danger of the public being too much dry-nursed. When private enterprise can fully meet public demands the State or local authorities have no need to interfere. Few, however, would now like to go back to the days when there was no postal service; nor later still, when there was no water supply, no sanitary drainage, no general scheme of education, and other great works of public organisation of which we now reap the advantage. Such measures naturally fall to the State or local authority, although some may not be worked as economically, nor better than they would by private enterprise.

A fair day's wage for a fair day's work is an axiom that may be accepted without question. The wage to the worker should be such as to cover the expense of food, clothing and housing. The community owes him that and no less. Every advance in the price of food and other articles is followed by a rise in wages; otherwise the worker could not fully perform his daily labour through want. Private enterprise provides the food and clothing, but that it has signally failed to provide proper housing, is evident to the bodily senses in the urban districts throughout the country. If private enterprise cannot economically supply houses at rents which the worker can afford to pay out of wages, the community must either pay a wage by which he can pay an economic rent, or supply houses at a rent which he can afford to pay out of the lower rate of wages. The community are generous in the matter of jails, asylums and workhouses, which the independent minded worker does his best to take no advantage of; and within its limits medical treatment, which he is but equally pleased to dispense with if he can. Handicapped in the matter of bad housing, and so often at an extortionate rent, his work suffers from the conditions under which he lives. Bad air, bad light, over-crowding, uncleanliness and want of proper sanitary accommodation take their toll in a low standard of health of himself and his family, and the heaviest toll is taken on the children. The campaign against the "White Scourge," consumption will cease to be the great necessity it is, with the disappearance of the slum cottage and the reeking tenement in our towns and cities. The unit of the urban community – the unit of the State – is the family. Both should see to it that the family should be so housed that it may reach to its fullest and freest development, and that every member may in time give forth his best service. We have given the workman education at enormous cost; we have given him the vote and made him in a sense our master; and we house him infinitely worse than the criminal and pauper. The wonder of it is that he does not turn round and rend us. What he can do when goaded by the wild tongues of fanatical agitators, Dublin has had a bitter experience of in weeks not long gone by. But the argument of fear has no place in the plea for the proper housing of the masses. The ground upon which it is based is one of common justice and pressing necessity, and further, it will pay. No money can be better spent than in the making of competent, healthy and happy men and women for the duties of life. There is no greater waste in these islands to-day than the waste of human life. How can children grow up happy, obedient, virtuous, with all their capacities developed, when housed together in cottage styes or crowded tenements. The child's inherent right is to be made fit for citizenship, but as long as the working classes are housed as they are, this cannot be accomplished.

Disease arises from over-crowding, dirt and insanitation. The drink habit follows from bad housing with equal certainty in many cases. We cannot wait for good habits to arise out of bad before we properly house the working classes. If every public-house in Ireland were closed tomorrow, and general total abstinence prevailed, the housing question remains for solution. The urban dweller has equal claims with the agricultural labourer for proper housing conditions, and these claims, in all fairness to the service he renders, must be met without delay.

Posted by an extract of reflection at Thursday, January 21, 2016