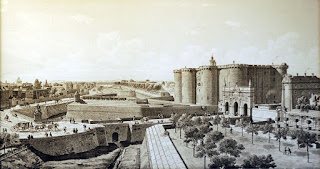 Very few places have been so much misrepresented as the Bastille, the King’s Paris prison-house torn down in the early days of the French Revolution. It was not a place in which exceptional cruelties were practised, nor where prisoners were confined in loathsome dungeons, or left to perish in underground cells. In a history which stretches over four centuries and a half there are, of course, lamentable pages, though there are pages almost as lamentable in the annals of the Tower of London. Instances of individual oppression, cases of prisoners overlooked, victims of harsh discipline and unrelenting despotism, meet us. Torture, here as elsewhere, was resorted to in the effort to wring out the truth from atrocious criminals. But such examples of severity and oppression are not proportionately more numerous in the Bastille than in other prisons.

Yet, though more accurate knowledge has dispelled many fables respecting confinement in the Bastille, public sentiment did not err in identifying it with the absolute government of the French monarchy. The Bastille was in truth the citadel of despotism. However benevolent or indulgent its discipline, it was pre-eminently the King’s prison-house. To it were sent those whom he desired to withdraw from the jurisdiction of Parliament, and in it any man might be confined without right of gaol delivery at the King’s pleasure, or that of his ministers. A simple lettre de cachet — they were signed in blank and could be filled in with any name as required — was sufficient warrant for sending any Frenchman to the prison.

The secrecy of the arrest and its attendant circumstances lent an attendant terror. It was generally after dark when prisoners were taken to the Bastille, the carriage being sometimes driven by a circuitous route in order to conceal its destination. On arrival at the gates the draw-bridges were let down, and the guard through which the newcomer passed hid their faces in their hands as he was conducted before the Governor. Even the scrupulous examination of the Royal warrant increased the sense of solemn mystery, which was also fostered by the exactness of the inventory drawn up of the prisoner’s effects, the rigorous search of his person, and the severe examination of the prisoner on oath, which preceded his introduction to his solitary cell. With criminals the most common form of ministerial direction to the Governor was that he should permit no living soul to have communication with the newcomer, and that all use of pens, ink, and paper should be denied him. Even when permission to take exercise in the courtyard was granted, the prisoner was compelled instantly to hide in a recess every time that another person, though only a passing servant, entered the yard.. Add to this that those detained in the Bastille were frequently arrested under feigned names, and the mystery which enclosed them became impenetrable.

Nor was the popular imagination less inflamed by the significant silence observed by those who were released from the cells of the Royal prison. In obedience to the King’s order every one on leaving had to sign a solemn obligation to speak to no one about the prisoners or anything else in the Bastille which might have come to his knowledge. When a death occurred it was carefully hushed up, the funeral obsequies were performed by night, and the burial frequently registered under an assumed name. No stranger was allowed to visit the place — a rule to which but one exception is recorded, even Peter the Great being refused admission. Men spoke of it with bated breath, as of a forbidden topic, until it passed into a proverb that it was safer to be silent than to talk of the Bastille.

Financiers and prisoners; dissipated nobles and dissolute women; duellists and insubordinate officers; forgers, coiners, quacks, sorcerers; miscreants of every shade in the original meaning of that baleful epithet, from the fanatic assertor that the Pope was Anti-Christ to the incautious champion who exaggerated by a hair’s breadth the proper recognition of Papal authority; libellers and librarians, the authors and publishers of writings touching on a long list of forbidden subjects, sacred and secular; a sprinkling of madmen and swarms of spies — all, one time or other, were immured in its towers. The vindictive influence of Madame de Pompadour and the crime of spilling one drop of the sacred blood of an annointed king are amply illustrated in the imprisonment of Latude and the brutal tortures inflicted on Damiens. Whilst the milder rule of Louis XVI. brought out into strong relief by the courteous treatment of Cardinal de Rohan under suspicion of complicity in the affair of the Diamond Necklace, is more strikingly established by the empty chambers of the Bastille, in which only seven prisoners were confined at the moment of its fall.

Ecclesiastical offenders, Protestant and Jansenist — he is the Puritan of French Roman Catholicism — crowded the Bastille to excess in the reign of Louis XIV. and his immediate successor. No class of prisoners was treated with such cruelty as the Huguenot sufferers, for conscience sake. No mercy was ever extended to a French Protestant, a Huguenot. The terrors of perpetual imprisonment or the galleys were aggravated by the ceaseless importunity of priests desirous of winning Royal favour by their conversion. Amidst the hundreds of their names entered on the depositions, but few are known to earthly fame. For the offence of Jansenism, De Lacy is the most illustrious of those committed to the Bastille, within whose walls he contentedly pursued his translation of the Bible into French during his long confinement. But the prosecution of his faith was no less vigilant than that of Protestantism. Batches sometimes of two dozen or more persons were dealt with collectively, and all the machinery of the secret police was set in motion to hunt out the printers, publishers, and distributors of this Puritanism within Roman Catholicism.

The Huguenot nobility had deserted their faith almost to a man, or with the wealthier of the Protestant business people had emigrated to foreign lands. It is of the obscure crowd — the not many noble, not many mighty, not many wise after the flesh—that the heroic bands of Huguenot martyrs were formed. The number incarcerated between 1685 and 1700 alone surpasses belief and will never be fully known. For twenty-five years, Cardel, a Reformed minister of blameless life and highly esteemed, was detained in captivity from which death alone released him. When the prison discipline was relaxed in favour of others, nothing save significant hints of increased severity to the Huguenots occurs in the Minister’s instructions to the Governor of the Bastille. Living, their only hope of indulgence was conditional on their consent to receive a confessor; dying, they were buried like dogs anywhere in the casemates or the garden. Their bodies were buried in outward disgrace, but their example of obedience to conscience liveth for evermore.

This article appeared in the Church of Ireland Gazette, 13th March 1914.


Posted by an extract of reflection at Thursday, January 07, 2016

Email ThisBlogThis!Share to TwitterShare to FacebookShare to Pinterest
Labels: Church of Ireland Gazette, history, The Bastille