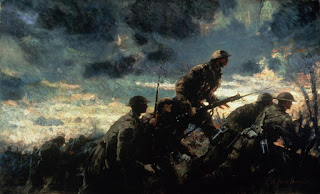 In their edition of 4th June 1915, The Witness published a few lines of a poem with the following introduction –


"The Times" publishes a poem by Captain Julian Grenfell, whose death from wounds is announced. It is called "Into Battle," and we quote some of the verses:--

I was drawn to it, however, as the "pro-war" sentiment of the poem is unlike the more rueful and melancholy nature of most of the war poetry popular today. Into Battle has been described by Tim Kendall, President of The War Poets Association, as "second in popularity only to Brooke's The Soldier during and immediately after the War," but "is now either awkwardly ignored or explicitly condemned."  I thought that if I was going to highlight this extract it was worth putting on the complete poem.

The naked earth is warm with spring,
And with green grass and bursting trees
Leans to the sun's gaze glorying,
And quivers in the sunny breeze;
And life is colour and warmth and light,
And a striving evermore for these;
And he is dead who will not fight;
And who dies fighting has increase.

The fighting man shall from the sun
Take warmth, and life from the glowing earth;
Speed with the light-foot winds to run,
And with the trees to newer birth;
And find, when fighting shall be done,
Great rest, and fullness after dearth.

All the bright company of Heaven
Hold him in their high comradeship,
The Dog-Star, and the Sisters Seven,
Orion's Belt and sworded hip.

The woodland trees that stand together,
They stand to him each one a friend;
They gently speak in the windy weather;
They guide to valley and ridge's end.

The kestrel hovering by day,
And the little owls that call by night,
Bid him be swift and keen as they,
As keen of ear, as swift of sight.

The blackbird sings to him, "Brother, brother,
If this be the last song you shall sing,
Sing well, for you may not sing another;
Brother, sing."

And when the burning moment breaks,
And all things else are out of mind,
And only joy of battle takes
Him by the throat, and makes him blind,

Through joy and blindness he shall know,
Not caring much to know, that still
Nor lead nor steel shall reach him, so
That it be not the Destined Will.

The thundering line of battle stands,
And in the air death moans and sings;
But Day shall clasp him with strong hands,
And Night shall fold him in soft wings.

Image: Over The Top by Alfred Bastien

Posted by an extract of reflection at Thursday, June 11, 2015