From a Minesweeper in the Dardanelles 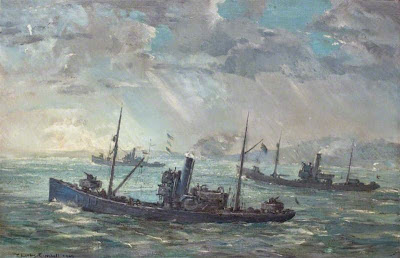 (Letter from Sub-Lieut. John Blundell, R.N., to his Uncle, the Rev. J. Blundell.)

DEAR UNCLE, — I was very pleased to get your letter this morning and to hear that Aunt Fanny is recovering from influenza, and that Cousin Dorothy got second prize in Divinity. It was most interesting to hear that Tabs had two black kittens this time; I rather thought that they would be grey, as the last lot were white. I quite follow your arguments about "Should clergymen fight?" As you say, the matter is of the greatest importance, and naturally The Times published your letter.

You tell me that you gather from the papers that the great silent Navy is having a quiet time now, and you ask me what we are doing. I wish I knew myself, but as we only go into port once a week to coal and are not allowed to communicate with the beach, I am rather ignorant of its doings. No, I am sorry to say I did not get the wild duck. It went, as all gifts do, into the Fleet Pool, and I got a pair of mittens (my seventh pair) instead. We are the Scouts, and come last on the list. There are five grades before us. The luckiest devils are the harbour defence flotillas, who get the fruit and fish. The next best off are the Coast Defence Patrols, who get the fowls and their so-called fresh eggs. The intermediate grades, such as Grand Fleet, seagoing flotillas, etc., get the general cargo, and we, who are far from home, get the frozen mutton, the imperishable corned beef, the indestructible tinned salmon, and the endurable woollen gear. The things that we might reasonably hope to find in our class, such as grouse and gorgonzola, never pass beyond the second grade.

As our boats are not sufficient to carry all hands, the latest scheme is to keep a large barrel of grease and thick oil on the upper deck, and preparatory to abandoning ship all men are supposed to strip and smear themselves over with this stuff as protection against cold water. They then, according to the latest Admiralty circular letter, are permitted to leave the ship. We had a false alarm the other night, hitting a floating mine, which didn't explode. A weird figure was seen hovering round the upper deck afterwards, and it took us all the middle watch to clear the oil and grease off the ship doctor.

My last skipper has been having an awfully good time in port since the Great Blockade began, as a German submarine kept on hovering about outside and they could not go to sea until it had been dealt with by the T.B.D.'s. It was known as the "Married Man's Friend," and they were quite sorry to hear of its decease. I saw Jack the other day. He is in one of the old battleships, officially termed "Fleet-Leader" (we call them "mine-crushers"), and he says his only diversion is the constant redrafting of his will so that each member of the family shall bear a fair burden of his debts.

Charlie Farrel is in the mine-sweeping brigade. He is now in his fourth trawler, and is known as "Football Charlie," as he's always being blown up. Rather bad luck on a fellow who is +2 at golf and who regards all other games (except fighting) as contemptible.

As you say in your letter, great issues are at stake, and it must be awfully exciting in England just now, but it's very dull at sea, so I will clear up this letter.

Text: Punch, 16th June 1915.
Image: Minesweepers by Charles Ernest Cundall.
Posted by an extract of reflection at Thursday, May 28, 2015