A Further Sketch of Belfast

Having, at the conclusion of the brief sketch of the history of Belfast in our 44th number, intimated our intention of giving some account of the present state of that town as regards its population, trade, manufactures, public institutions, &c., we now proceed to redeem that pledge.

Of the amazing rapidity with which Belfast has of late years been advancing to her present degree of importance, a tolerably fair estimate may be formed from a statement of her population at the following distant periods of time;

By the last census, viz. that of 1831, the number of dwelling houses is stated to be 8,710; and the population, males 25,450, females 28,287; total 53,737. It is to be observed, that this is exclusive of the populous suburb of Ballymacarrett, which, (though in the county of Down, and separated from Belfast Proper by the river Lagan, across which the communication is at present carried on by means of the Long bridge of which we have already spoken,) may, we think, be fairly considered as part of the town of Belfast. The census of 1831 states the population of Ballymacarrett to be, males 2,490, females 2,678; total 5,168. 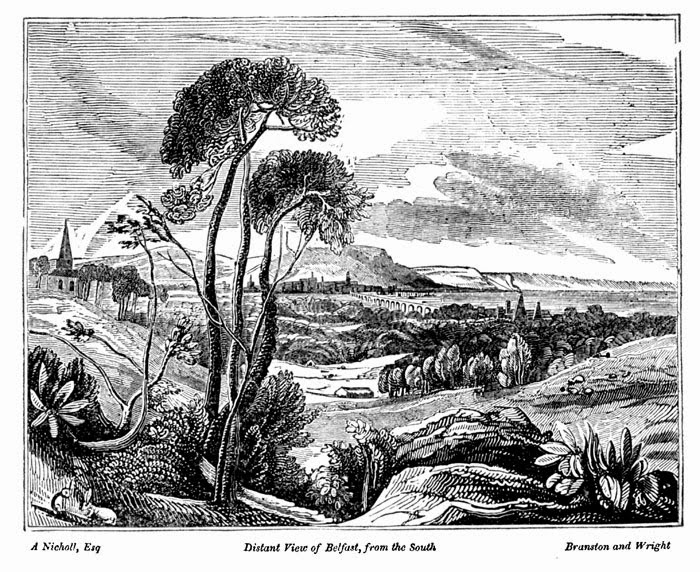 The relative proportion of Protestants to Roman Catholics in Belfast cannot be stated with precision; but we are informed that the present Roman Catholic population is estimated at 20,000.

The places of public worship are in number twenty-one, of which three are of the Established Church, namely, the parish church of St. Anne's, a chapel-of-ease, and a free church, lately built; six belong to the Presbyterian body; two of these are of what is termed the New-light; there are four meeting-houses of Methodist congregations; three of the Seceders; one of the Independents; one of the Covenanters; one of the Society of Friends, and two Roman Catholic chapels. In Ballymacarrett there is a parish church, a Roman Catholic chapel, and a Methodist meeting-house.

The number of vessels belonging to the port of Belfast, in 1686, was but 67, the tonnage of which was rated at 3,307 tons. The largest of these was the Antelope, of 200 tons which traded to Virginia. From the Belfast Mercantile Register, a paper published by government authority, we learn that on the 31st of December, 1832, the number of vessels registered at the port of Belfast, as engaged with others from various parts, both British and foreign, in its trade, was 219, the tonnage of which amounted to 23,681 terns. Of these sixty vessels, measuring 13,554 tons (averaging 225 tons to each ship) were employed in foreign commerce, and the remaining 159 (averaging 60 tons each) in the coasting and cross-channel trade.

The docks of Belfast are extensive and handsome; a large one was lately erected by Messrs. Dunbar and Holmes, at their own expense, and without any assistance from government.

The founderies for the casting of iron and metal are on an extensive scale; and the manufacture of glass, salt, vitriol, and other less important matters, is by no means inconsiderable. But the chief manufacture is that of cotton, which is comparatively of recent introduction into this country, having been first brought to Belfast about the end of the last century. It now gives employment to a great mass of the population in this town, and the surrounding district; and has in a great measure superseded the weaving of linen, at least in the houses of the peasantry. There can be no doubt but that the domestic manufacture of linen has greatly retrograded of late years; but notwithstanding, we have learned from a source of unquestionable authority, that by the recent erection of flaxmills, and public establishments for the manufacture of linens, the export trade has now regained its former extent, and, in fact, was never greater than at the present day. There is one large flax-mill, the property of the Messrs. Mulholland at this moment in full operation, and several more are about being built.

The following authentic history of the introduction of cotton machinery into Ulster, has been obligingly communicated to us by a friend; and will, we apprehend, be found interesting.

In the year 1771, Mr. Robert Joy, who had a principal part in designing the establishment in Belfast, where the support of the young and aged poor is provided for, and who was the revered father of the volunteers in Ulster, conceived when on a tour through North Britain, the scheme of introducing into this, then desponding, kingdom, the more intricate branches of the cotton manufacture. He was mainly prompted to this by a desire to render service to the lower orders of the working poor, particularly linen weavers and spinners, whose livelihood was often rendered precarious, depending almost solely on a single manufacture -- that of linen.

Having suggested that the spinning of cotton yarn might, as an introductory step, be a fit and profitable employment for the children of the Belfast Poor-house, a spinning machine was made in Belfast, at the expense of Mr. Joy and a Mr. M'Cabe, assisted in the practical part by Nicholas Grimshaw, cotton and linen printer, from England, who had some time before settled in this country. Shortly afterwards an experienced spinner was brought over by Mr. Joy from Scotland, to instruct the children in the house. Also, under the same direction, a carding machine was erected, to go by water, which was afterwards removed to the poor-house, and wrought by hand. 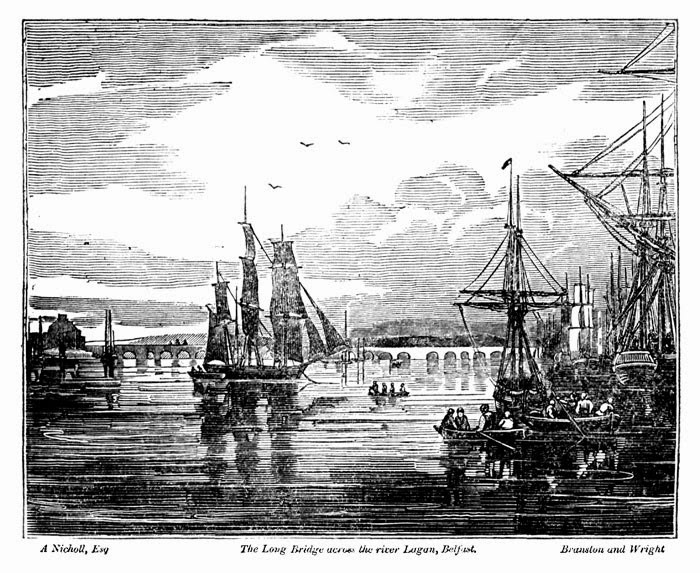 After Messrs. Joy and M'Cabe had in vain solicited the co-operation of others, in prosecuting a scheme fraught with such national advantage, they proposed a transfer of their machinery, at first cost, to the managers of the Charitable Institution, promising as continued attention as if the emoluments were to be their own.

On the refusal of the Committee to run the risk of a new undertaking, the original proprietors formed themselves into a company with others. They dispatched a skilful mechanic to England, who obtained a minute knowledge of the most improved British machinery. On his return, they erected a new carding machine, of superior structure, and a spinning jenny of 72 spindles, which was then reckoned a very large size.

In a memorial to the Dublin Society, praying for aid, they informed the Board, that far from confining their hopes of gain to themselves, they had encouraged the public to avail themselves of their discoveries -- they had exposed their machinery to open view -- permitted numbers, even from distant parts, to be gratuitously taught in their apartments -- and promoted the manufacture of cottons, dimities, and marseilles quilting, equally by example and instruction.

The magnitude of those improvements at the time, is now to be estimated by comparison. Eight or ten cuts per day, were formerly the scanty produce of the most laborious spinner on the common wheel; while, in the same time, not more than a single pound could be carded by hand. On their jenny of 72 spindles, 72 Irish hanks were spun weekly, an increase of fourteen to one; and by their carding machine, twenty pounds of rovings were daily thrown off, an increase of twenty to one.

Their exertions were in time followed by Messrs. Nathaniel Wilson and Nicholas Grimshaw. To the talents, property, and adventurous spirit of the former of these two gentlemen, and to the practical knowledge, talent, and industry of the latter, this country stands highly indebted. The first mill for spinning twist, by water, in Ireland, was built by them in 1784, from which date the Irish cotton manufacture was considered firmly established.

In the year 1800, (only twenty. three years from the origin of the enterprize by Mr. Joy,) it appeared in evidence before Parliament, that the cotton manufactures, which had been thus introduced, gave employment to 13,500 working people; and, including all manner of persons occupied in various ways, to 27,000, within a circuit of only ten miles, comprehending within its bounds the towns of Belfast and Lisburn.

It is worthy of observation, that as far as machinery is concerned, a poor-house was the cradle of the present cotton trade of Ireland; and the detail now given, should be a stimulus to the exertions of every individual. -- It demonstrates how much may be effected by a limited capital and ardent zeal. In the present instance, the early introduction of a manufacture, already of immense and increasing importance, has been traced to the perseverance of private individuals, actuated by a wish to create useful employment for destitute children -- to assist the working classes at a time when the linen manufacture was in a most depressed state -- and to render a permanent benefit to the community at large. There are now eight large cotton mills in full work in Belfast and its neighbourhood.

Of the literary establishments, the first in rank is the Belfast Academical Institution, m which a comprehensive system of education of youth is carried on under a body incorporated by Act of Parliament, in 1810. Another of high character, is the Belfast Academy, instituted 25th January, 1786. There are, besides, various literary societies which meet periodically, and a Mechanic's Institute. Of the former, the Gaelic Society is particularly deserving of notice, on account of its national character; as is also the Irish Harp Society, which preserves our national instrument, and the race of native minstrels. At a short distance from the town is an extensive botanical garden. The Belfast National History Society, and the handsome edifice lately erected for their Museum has been already noticed in our 30th Number.

There are many distinguished names connected with literature, which should be recorded in the annals of Belfast, but we are exceeding our limits, and must restrict ourselves to the mention of one -- Dr. Alexander Haliday, the amiable and talented friend of Lord Charlemont; his character is thus given by a contemporary:

"Haliday was a scholar; a man of peculiar and varied genius and talents. As a physician, universally esteemed throughout the North of Ireland, or a considerable part of it; his medical skill was not less sought after than his conversation, which was truly valuable. He knew mankind perfectly; but his wit, which was abundant, in no wise partook of that saturnine complexion, which too deep an insight into our frail nature, and a vexatious intercourse with the world may sometimes generate, and will too often be found in company with a cold heart, and a fain mind, affecting that superiority to which it has no claim. He was as playful as intelligent; full of life and humour, candid, hospitable, and benevolent."

This may appear to be too laudatory, but we are assured that he truly, deserved it all; and the following lines written by an intimate friend of his, at the time when he was in the zenith of his popularity and practice, appears abundantly to corroborate it:--


"If to foibles, not faults, honest laughter's inclined,
While the incidents hit, and the actions defined;
If anecdote pleased, with nought out of joint,
And well-seasoned epigram always in point;
If humour be wanting to light up the feast.
And art should be welcome, and genius carest,
Ask the Doctor to set every guest in a roar --
But what heart shall be light when his jests are no more?
R. W.


There is a fact we find we have hitherto omitted to state, which is worthy of being recorded: namely, that the first edition of the Bible ever printed in Ireland, appeared from the press of James Blow, in Belfast, in the year 1704. It is also remarkable, that the Belfast New-Letter is, (with the single objection of, we believe, a Limerick Paper), the oldest Newspaper in Ireland, having been established in 1737. The other Newspapers published here, are the Commercial Chronicle, the Mercantile Register, the Guardian, and the Northern Whig.

Posted by an extract of reflection at Thursday, December 11, 2014