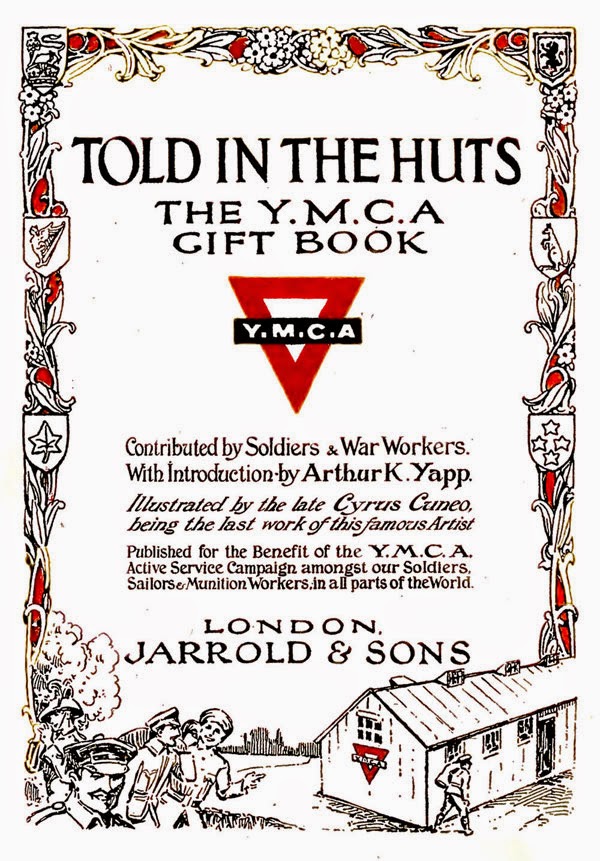 Within weeks of the outbreak of the war, they had set up hundreds of recreation centres -- which became known as 'huts' -- providing tea, sandwiches and reading materials, usually around train stations and transit junctions.

In late 1914 huts where set up in France around the main army bases there and by the end of 1915 there were hundreds more established throughout the area of operations some very close to the front lines.

YMCA workers were mainly women, the men usually having been too old for military service or declared medically unfit. It has been estimated that at any one time, 1,500 YMCA workers were in France and Flanders alone.

For information on the work of the YMCA in France see my post of Arthur K. Yapp's book The Romance of the Red Triangle.

In 1916, to help fund their work with "our soldiers, sailors & munition workers, in all parts of the world," the YMCA produced a book entitled Told in the Huts: The Y.M.C.A. Gift book. With illustrations by Cyrus Cunego the book contained stories and poems contributed by soldiers and YMCA workers.

Over the next few weeks I intend to reproduce many of those stories. The paintings contained in the book, along with several sketches, can be found on my Facebook page.

An Introduction by Arthur K. Yapp

The little brown Hut made of timber, and roofed with felt, serving the men at outposts in the danger zone of the East Coast -- on the wilds of Salisbury Plain -- dotted about in hundreds of camps in all parts of the United Kingdom.

What a romantic story could be told by the dug-out Hut at Anzac! What did the Turks do with it when our men evacuated the Peninsula? Or the Huts that are as busy as beehives on the banks of the Tigris, in the wilds of British or German East Africa, or on either bank of the Suez Canal! What stories they could tell!

Then there are the Huts in France. One wishes those in the great Base Camps could tell their story of men heartened by the touch they have given them of home life when far away from home; of the splendid concerts and cinema entertainments; crowded meetings when men have felt themselves stirred to the depths at the Old, Old Story that has been told in all its simplicity, but with persuasive earnestness that has carried conviction, and has helped them to realise as they left the meetings to go "up the line" that they were not facing the ordeal of battle alone.

The Hostel Huts, too, where the friends of dangerously wounded men are entertained by the Y.M.C.A. free of charge! If they could tell what they have seen and heard, it would be one of the most human stories ever told a story of broken hearts bound up by the loving hands of Christian sympathy and love.

And what of the Huts at the Fronts in France and Flanders? The Y.M.C.A. Hut and the Y.M.C.A. man, both bearing the mystic sign of the Red Triangle, mean everything to the men in khaki in Flanders. The French people speak of the Y.M.C.A. as "Les Ygrec em ce ah," and will pass its red triangle anywhere. "Tommy Atkins" calls it "home," and to him it stands for all that is best and truest and noblest in "dear old Blighty" as he affectionately terms the land he loves "across the sea."

This book tells a few of the thousands of stories of reckless daring and deathless heroism that have been recounted from time to time in the Huts of the Y.M.C.A. It also recounts some of the more prosaic tales that our splendid men delight to tell one another in the Huts. The book has not been prepared with a view to "boosting" the Y.M.C.A., but incidentally it draws attention to one of the greatest social and religious movements of our time.

The Story of the Ploegsteert Hut.


When the Right Hon. Winston Spencer Churchill was in Flanders, he happened to be on duty with his men in the trenches on the ridge of Ploegsteert Wood. It was a Saturday night in early spring. All was quiet, and as "black as pitch." Shortly before midnight a star shell shot up from the German trenches and lit up the whole countryside with an unearthly brilliance. This was followed by others, and the effect was weird in the extreme. Presently the shriek of a shell indicated that the enemy contemplated an attack. The shell burst in flames in front of the little Y.M.C.A. Hut. The noise of the explosion roused the workers in the Hut, and in less than four minutes they had slipped into their clothes and taken shelter in the dug-out which had been previously prepared fifteen yards to the rear of the building. They had only reached safety in the nick of time. A second shell burst inside the Hut, and the flames shot up sky-high, and for an hour and a half the Huns "strafed" the hill and wood for all they were worth, pouring in thousands of shells of every size and description. With the morning light not a vestige of the Hut was to be seen. A Y.M.C.A. worker, searching amidst the ruins, found the shrivelled-up rims of his eye-glasses, and a soldier hunting for souvenirs found two coins, a two-franc piece and a twenty-centime piece welded together by the heat. That was all that was left of the "home" the boys had loved for months past.

One striking incident of the night remains to be told. Whenever there came a moment's lull between the booming of the guns, nightingales sung in the Ploegsteert Wood as if nothing out of the common was taking place. 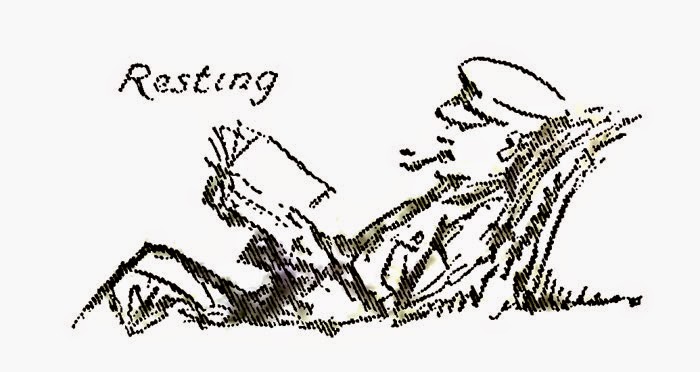 The Story of the Huston Hut.


The charming little Y.M.C.A. Hut that serves the men arriving at or departing from Euston Station was the first Hut with sleeping accommodation opened by the Y.M.C.A. in London during the War. In the early days as many as 420 men, passing through London on their way to or from the Front, have sought its friendly shelter on a single night.

Seven Scottish soldiers found their way in one morning. They were tired, home-sick, and depressed. Even a good square meal was not sufficient to revive their drooping spirits. They had said good-bye to their wives and bairns the day before, and had travelled through the night in a crowded train, so that they had been unable to sleep a wink. They were on their way to the Dardanelles, and well they knew what they had to face. Chancing to look over the counter into the kitchen, one of the men -- McTavish, we will call him -- saw a lady worker shelling peas, and summoning all his courage -- for these men, brave as they are, are very shy -- asked if he might come and help her. Of course she welcomed him, and later on his six comrades came forward to assist in the operation. That morning they shelled enough peas to last a week. When they had completed the self- imposed task, McTavish spoke again: "I cannot tell ye the like of what that has meant to us. It has taken us right back home, and now we are ready to go to the Dardanelles or to face whatever the future may have in store."

A touch of home, that is what the men find in the Huts. There is nothing official about them, and the one commodity they do not possess is "red-tape." The boys yearn for home!

One day the Leader of the Euston Hut noticed a group of ragged children gathered outside the main entrance. He watched them as they approached nearer and nearer the door. Some of them summoned up their courage and walked right in as if they owned the whole place. This was too much for him. He went up to them and said, " You must run away; this place is not for boys and girls, it is for soldiers and sailors." One little ragged urchin looked up in his face and said, "Please, sir, we have given our money towards this show and we want to see how it is run." When he made enquiries he found that they belonged to one of the poorest of the schools in the North of London, and out of their poverty they had given no less than thirty shillings, nearly the whole of it in halfpennies and farthings, towards the cost of the work of the Y.M.C.A.

Posted by an extract of reflection at Thursday, August 21, 2014