The Irish Guards at the Somme 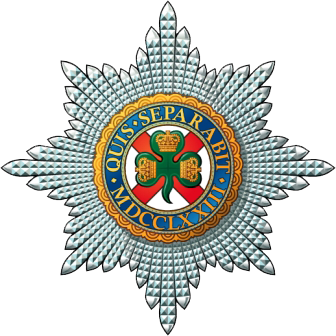 Two battalions of the Irish Guards, the 1st. and 2nd. Battalions, took part in the Battle of the Somme 1916. Both battalions were in the Guards Division and the principal actions in which they played an outstanding part were fought out during September 1916 in the battles officially known as "Flers-Courcelette" and "Morval" and embracing such memorable actions as the battles of Ginchy, Guillemont and Lesboeufs and over ground soaked with the blood of their fellow countrymen in the 16th. (Irish) Division a few days earlier.

We will recount the doings of the 1st. Battalion. Two days will always stand out as milestones in the History of the Irish Guards namely 15th. and 25th. September, 1916. Much is already known about the appalling ground conditions - the all prevailing mud and slime, the wreckage and stench of death, to make it necessary to go into any detail here, suffice to say that on these two days the 1st. Battalion lost 99% of its strength. It was on 15th. that the 1st. Bn. advanced at Ginchy in face of the most concentrated machine-gun fire from the "Orchard" and despite the most severe losses held the ground they had so valiantly fought over that day. The landscape at Ginchy was somewhat like the map of the moon. All known signs, landmarks and the like were obliterated, everybody knew the direction of the attack was to be N37 but that was about the only guide. The Guards Division launched itself forward into a veritable sleet of machine-gun and shell-fire and battered their way with bomb and bayonet until they reached a position where they could see the countryside between Flers and Lesboeufs - rooftops complete with tiles and a countryside that seemed normal was a change from the "Hellhole" that was their present position. The Germans fortified by the knowledge that the assault by the 6th. Div. between Ginchy and Leuze Wood had failed, thanks to the driving fire from the "Quadrilateral", were giving the Guards Division their complete attention, thus every shell-burst and burst of machine-gun fire found its way into the ranks of the Guards, but they did not flinch. They held on to the ground they had gained at such a cost. On September l6th the remnants of the battalion were relieved by the Lincolns of the 62nd. Brigade.

We come now to the attack on 25th September. This had limited objectives - German trenches and not merely lines drawn across a map. It concerned, too, a name which is stamped well in the deeds of valour of our Irish Troops - "Lesboeufs" - Of course the battalion had been reinforced with drafts from home since their ordeal on 15th.

The attack opened on a fine Sunday morning at 12.55 hrs. Our barrage locked down 200 yards ahead of the 'Micks', Nos. 1 and 2 Companies moved out with the rest of the line towards the German trenches. Immediately the enemy put down counter barrages and the hair began to fly. Our Artillery fire was much better than on 15th and it enabled the 'Micks' to take all their objectives one after another until finally they had fought through to the northern end of Lesboeufs where they consolidated and firmly held the position. Thousands of Germans were taken prisoner on this day, they were stunned and demoralized by the ferocity of the attacks upon them but on the other hand they seemed pleased to be out of it all. On our side of the scale the Irish Guards lost one officer killed, 10 wounded and 250 Other Ranks killed - Thus in the two attacks in this area within ten days we lost a full battalion.

The 2nd. Battalion was also involved in these battles on 15th. and 25th. September 1916. During the slogging match on 15th. the 2nd. Bn. amongst whose officers was a Captain H.R. Alexander (Field-Marshal Earl Alexander of Tunis), performed very valiantly in the tough fighting which the Guards Division encountered on this day. The battalion suffered severely as they were involved in all the desperate actions of that fateful day. One hundred and sixty-six survivors were all that remained of the 2nd. Bn. when the roll was called, a high price indeed was paid for the ground in front of Lesboeufs.

For the attack on 25th. the 2nd. Bn. were in reserve and when the call came on 16th. they took over from the 1st. Bn., again shattered for the second time in ten days. The Battalion held the positions gained on 25th. by 1st. Bn. east of Lesboeufs.

General Rawlinson, who commanded the IV Army said it was the vigorous attacks of the Guards Division under very trying conditions which won the day. They pressed forward the attack in face of a great concentration of enfilade fire from both flanks. Perhaps it would be right to say that the Guards Division by their success in capturing these key enemy positions was one of the main reasons which forced the eventual German withdrawal "according to plan" to the Hindenburg Line.

A solemn but beautiful reminder of the achievements of the Guards in this sector of the Somme battlefront is the well laid out and beautiful Guards Military Cemetery at Lesboeufs.

Posted by an extract of reflection at Thursday, August 14, 2014