The Age Limit for Women - No one over 35 need apply. 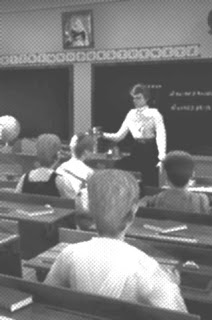 EVERY reader of the educational journals must be familiar with the typical advertisement that "The Council of the ----- High School for Girls will shortly appoint a headmistress. No one over 35 need apply."

It may be useful to consider the origin of this "formalized rule" that women are unfit to undertake such responsibility after the age thirty-five. The rule -- an advance, no doubt, on the eighteenth-century habit of referring to men and women of forty as "aged' -- became stereotyped as early as the middle of this century. Unmarried ladies, regarded as on the shelf at twenty-five, were forced to let their faculties die away for want of exercise. The freshness was drained out of them by the pressure of trivialities, unresisted by hope. Those who entered the labour market did so as victims of cruel misfortune, full of pity for themselves, and quickly worn out by their struggles to gain a livelihood with few qualifications for the task.

During the last twenty years a striking change has made itself apparent. In some branches the extension of the working period of a woman's life has been so great that it has even brought back to useful, hopeful enterprise women who have settled down to the colourless, dreary, monotonous round prescribed for the unattached elderly. The number of educated women who either earn a livelihood or engage in philanthropic work has not increased so much as is usually supposed, but the spirit in which the work is undertaken is wholly different. The period of youthful interestedness has been very greatly extended.

In fiction our women writers have long since abandoned sweet seventeen as a heroine; and even men writers -- slowest of all to observe such changes -- have, during the last five years or so, recognized that at that favoured age girls are nowadays too much absorbed in preparing for senior locals and college examinations to offer useful material for romantic literature.

Not a few of our veterans shake their heads over what I call the extension of usefulness, but what they call the prolongation of childish irresponsibility. The crudeness of the girl graduate of two or three and twenty is contrasted unfavourably with the finished manners and graceful maturity of the girl of eighteen some forty years ago. And there would be much to be urged in support of their disapproval, if, with the raising of the age limit of a girl's systematized education, there were no corresponding rise in the age limit of their usefulness and energy. If the prime of life were necessarily passed at an age fixed for all time, so that the time spent in preparation for work was deducted from the time available for work itself, it might fairly be doubted whether our modern system of education was not positively harmful.

But there is no such fixity in the age at which maturity is attained; and there is reason to believe that, as each generation takes longer to arrive at maturity, owing to much more careful attention to mental and physical development, so also each generation retains the possession of its mature powers for a longer period than the preceding one.

The brain which has not been trained in mental gymnastics in early youth, unless unusually active, loses its powers. Narrow-mindedness is a correct name for a psychological fact. That there were broad and vigorous-minded women at this period who probably owed much to their teachers there is no doubt. But, for the most part, these were women who by their social position came in contact with able men, and saw life from many points of view. The easy access to personal acquaintance with leaders of thought, statesmen, practical workers, and cultured and refined women gives to the aristocracy and the upper middle classes an education and training which never ceases, and which makes a university training an amusing episode rather than a necessity.

In the middle classes the circumstances and duties of a woman's life are entirely different. After marriage a limited income and maternal and domestic duties limit a woman's social education; and, if her mental powers have not been fully developed, it is difficult for her to resist the tendency to become absorbed in her purely personal worries and cares. Brain atrophy sets in, and with it old age, the closing up of the mental avenues to new impressions and feelings.

Thus any child at a Board School can be taught arithmetic; and most children at a high school can make progress in geometry and algebra. But even capable middle-class women, who begin these subjects for the first time in early life, are frequently found to be mentally incapable of the reasoning processes involved.

In one hundred years the age of childish responsibility has been raised from six to about twelve and, in the extra six years thus granted, imagination and individuality have been left free to develop themselves. During the last twenty years another change has taken place. The duties of the young person have altered. Formerly, at the age of eighteen, in the young person's fiction, she was expected to relieve her invalid mother of house-hold cares, and brighten her aged father's declining years. But mothers in 1899 refuse to become decrepit and take to the sofa, merely because their daughters are grown up, and fathers only require to be amused occasionally in the evening. The new mother may be considerably over thirty-five, bordering on fifty, perhaps; but she neither feels aged nor looks it, and is rather inclined to look beyond her home for full scope for her powers, when thus set free from maternal cares. And, given intelligence, length of years guarantees experience.

One of the tortures of the Inquisition was to place the victim in a room, the walls of which grew nearer to each other every day, until at last they closed in on him and crushed him to death. In the same way, intelligent life gradually grows fainter and fainter as the brain decays for want of exercise. A daily mental constitutional is necessary to prevent the accumulation of what W. K. Clifford called, mental fat. Mental gymnastics are needed to prevent stiffening of the brain. When not only our habits but our ideas have become fixed, then we have grown old. An octogenarian maybe young if he has preserved the faculty of modifying his conceptions in correspondence with new evidence.

Mental activity, provided there is no overstrain of the nerve, gives freshness and interest to life; and to be fresh and interested is to be young. It is because girls have been taught to use their brains, and women have been encouraged to keep them in repair, that this old stereotyped conception of the necessary failure of power after thirty-five years of age has become absurd. At what age the value of a woman's increased experience is counterbalanced by diminished physical power I do not pretend to judge. Women differ, and their social opportunities differ. I merely transpose my text, and say, "Do not let your intellect lazily decline upon generalizations, formalized rules, and laws of nature; but, rather, let it remain braced and keen, to watch the world accurately, and take every appearance on its own merits." -- Clara E. Collet, in The Contemporary Review.

Posted by an extract of reflection at Thursday, August 22, 2013