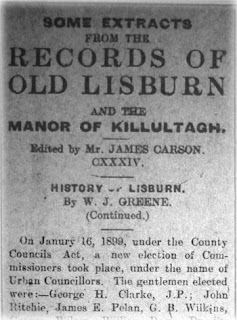 Mr. G. B. Wilkins; Solicitor to the Board, Mr. Wellington Young; Town Clerk, Mr. Thomas M. Wilson, son of the late Mr. James Wilson, who held this position for some years prior to Mr. T. M. Wilson.

The sanitary officer in 1906, Dr. James G. Jefferson, and town surveyor. Mr. James Johnston. All the markets are most commodious, well-kept and well managed by the markets superintendent, Mr. Robert M'Creight, who is also school attendance inspector for the schools in the urban district, as well as being rate collector for the town.

built by the generosity of Sir Richard Wallace, Bart, in the year 1883, at a cost of about £4,000, forms a most attractive sight on arrival in the town, and is the first object which meets the eye of visitors coming from the railway station. The facade has beautiful Corinthian pillars, and bears the Royal Arms on the pediment, while the Wallace Arms decorate the eastern end. About 1903 this, along with other buildings, was acquired by the Urban District Council from Sir John Murray Scott, Bart, the successor in title, and is now carefully attended to by the present owners.

Courts of quarter sessions and petty sessions are regularly held, also courts for the disposal of offenders against the towns improvement act.

Prior to the building of the present Courthouse the Petty Sessions for the district were held for a number of years in the Assembly Rooms after the old Courthouse in Castle Street had been pulled down, to make room for the Estate Office, now used as Urban District Council Offices. The clerk of Petty Sessions is Thomas J. English, who has held the position since April, 1882. The first Petty Sessions Court was held in the new Courthouse in April, 1884.

The present commodious and substantial Post Office in Railway Street was erected by the Government in 1896. In 1796 the postage from Dublin to Lisburn or Belfast was 5d., and in 1834 it appears to have risen to 9d.

The first mail coach commenced to ran from Dublin to Belfast and Cork in 1790. The introduction of mail coaches at that time not only greatly improved the system of the post office, but was attended with the greatest advantages to the general interests of Ireland. Previous to their introduction the state of the roads was such that it commonly took five to six days to perform the journey from Dublin to Lisburn, when the fare was 36s 3d inside, and half that sum outside.

Lisburn being situated on the direct route between the two principal cities of Ireland, the mail coach passed through Lisburn daily, stopping to change horses at the Hertford Arms, now the site occupied by the Northern Bank.

The Armagh coach stopped at the King's Arms, also in Market Square, owned then by Mr. George Moore.

In 1905 the new drainage works were inaugurated.

The town is also the possessor of two weekly newspapers -- the "Lisburn Standard," which was first initiated in 1876 by W. Johnston succeeded by Mr. J. E. Reilly, and is now owned by Victor M'Murray. The "Lisburn Herald " was started some years later by the present proprietor, Robert M'Mullan.

Lisburn returned a member to the Imperial Parliament up to the time of the Redistribution Act; after this it became merged in the South Antrim Division. William Ellison Macartney, Esq., represented this division for many years, but on being appointed Deputy-Master of the Mint, at the end of 1902, he was obliged to resign his seat. He was succeeded by Charles Curtis Craig Esq., the present member.

Among the families who have contributed and are contributing still to the commercial prosperity of Lisburn are the Barbours, Richardsons, Stewarts, Coulsons, and their representatives. Amongst those intimately connected with Lisburn the names of Nicholson, Stewart, Hart, Taylor, Betty, Monro, Crommelin, Wallace, Thompson, Higginson, and many others stand out prominently, and to none more than those, and the men who pioneered and developed the industries of "Ye Towne of Lisnagarvey," do the well-known words of the poet more aptly apply --

Lives of great men all remind us
We can make our lives sublime,
And departing leave behind us
Footprints on the sands of time.

(This article was originally published in the Lisburn Standard on 1 August 1919 as part of a series which ran in that paper each week for several years. The text along with other extracts can be found on my website Eddies Extracts.)
Posted by an extract of reflection at Thursday, August 01, 2013