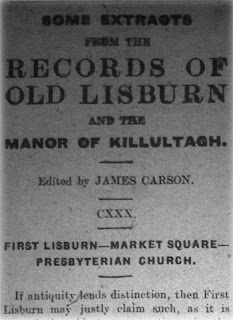 If antiquity lends distinction, then First Lisburn may justly claim such, as it is one of the oldest congregations in the Presbyterian Church in Ireland. The year in which the congregation was founded cannot now be ascertained, but it is known that it existed in 1687, and from the session records, which are practically intact from the year following, it is evident the congregation had a much earlier existence. These records, with baptismal and marriage registers, form a valuable link with the past, and reveal the quaint methods of church management by our forefathers, as well as the strict discipline exercised towards wrongdoers.

The marriage and baptismal registers have proved of great value in establishing the genealogical trees of families of distinction whose ancestors were formerly worshippers, and in many instances have been the means of determining the rightful heirs to valuable inheritances. Letters are occasionally received from different quarters of the globe requesting extracts for various purposes. It is worthy of note that a gentleman now resident in London, Sir Theodore C. Hope, recently visited Lisburn to glean some information regarding his forebears from these old records, and was so struck with their great historical value that he kindly proffered to have them restored and rebound. Through his influence they were placed in the hands of experts in the British Museum, and the result has been eminently satisfactory, as they are now preserved in a number of richly-bound volumes.

The exact site of the original Church or Meeting-House is uncertain, but it was in that part of the town now known as the Longstone, the building being of primitive design, with thatched roof. It is said King William worshipped in it while his troops were encamped at Blaris. This building is believed to have been burnt down in the great fire which broke out on Sunday, the 20th April, 1707, and destroyed the town. The church was rebuilt on the present site at a cost of £400, and in 1768, sixty-one years later, it was again rebuilt on a larger scale, the accommodation having proved insufficient for the membership. The new edifice cost above £600, and it is on record that the members of the Established Church subscribed £120 to the building fund, which is abundant testimony to the high estimation in which the Presbyterians of Lisburn were held by the members of the sister Church. It speaks volumes for the Christian brotherliness existing between different denominations at this period. No further change appears to have been made in the church buildings until the year 1873, when they were enlarged and remodelled.

From 1688 until the present time thirteen ministers have occupied the pulpit of First Lisburn, some of whom took a leading part in the affairs of the Synod and Assembly. The names are as follows:-- Alexander M'Cracken, 1688; Gilbert Kennedy, 1732; William Patton, 1736; Patrick Buchanan, 1747; James Bryson, 1764; George Kennedy, 1775; William Bruce, 1779; Andrew Craig, 1783; James Morgan, 1824; Alexander Henderson, 1829; William Breakey, 1856; John L. Rentoul, 1872; J. J. C. Breakey, 1886. The Rev. Alexander M'Cracken, 1688, was one of the deputation to King William III. at Hillsborough, which was successful in securing an increase to the Regium Donum. It will therefore be seen that this congregation holds a very unique position in the history of the Presbyterian Church in Ireland in relation to this National Fund through the personality of one of its ministers.

In 1918 an organ chamber, opening up to the rere of the pulpit through a fine arch, was constructed to receive the "Musgrave Organ," presented to the congregation by Mr. Henry Musgrave, only surviving son of the late Samuel Musgrave, M.D., Lisburn. At the same time a new pulpit was erected and other extensive repairs and improvements in connection with the church carried out at a cost of some £1,700.

There are fourteen windows in the church. The two large ones in south gable, situate on either side of the pulpit, occupy a commanding position. One represents "The Good Samaritan," presented by Henry and Edgar Musgrave, Belfast, in memory of their parents, Samuel Musgrave, of Lisburn, physician and surgeon, who died in 1834, and his wife, Mary Riddell, who died in 1802.

In the vestibule of the church is a memorial tablet to the Rev. John Laurence Rentoul, fourteen years minister of the congregation, ordained 1872, called to Sunderland, 1886, died at Wishaw, Scotland, 1900, aged 48 years.

Notes on Two Old Leases in Existence Relating to the Church Property.

Indenture made in 1751, between the Marquis of Hertford and Henry Bell and Francis Burden, both of Lisburn, gents. It recites a previous lease, 1741, between Baron Conway and William Fairlie, of Lisburn:-- "All that piece or parcel of ground lying on the south side of the Market Place -- the holding heretofore Levingstons -- 70 feet front -- depth backwards 216 feet, adjoining to the last passage leading to the Meeting House, and to the west to the Shambles, together with the front tenement now standing thereon, with backside and gardens and office, houses and holdings thereon, in trust for the sole use and benefit of the Dissenting Congregation of Lisburn."

Indenture dated 1827 between the Marquis of Hertford -- same holding as above -- and Alexander Williamson, Lambeg; George Whitla, and James Ward, Lisburn. 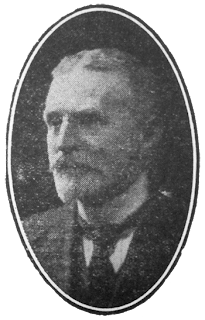 After over two and a half years of continuous publication in the columns of this paper, "The Records," edited by Mr. James Carson, Parkmount, draw to a close. They commenced in October, 1916, and April, 1919, witnesses their termination. In the process of the work an immense amount of valuable and interesting information regarding the history of the town and district has been collected and collated and presented to our readers by Mr. Carson. Indeed there are few towns in the province, thanks to Mr. Carson's ability and industry, that have so complete a record of their past as that of which Lisburn can now boast.

Concurrently with the closing of "The Records," it came upon us as a shock, and a nasty shock at that, to learn that Mr. Carson was removing from Lisburn and going to reside in Belfast, in order that he might be near his son, Captain J. C. Carson, of the Indian Army, who served in the earlier years of the war with the Ulster Division in France, who has now returned home to resume his medical studies.

Since Mr Carson first came to reside in Lisburn some twenty-five years ago as manager of the Ulster Bank, Ltd., he has been very closely identified with everything that pertained to the advancement and welfare of the town. He was so thorough and practical, that his connection with any movement made for success.

In the later years hie interest in the Technical School was well known. He acted as chairman of committee during the most critical year of the school's career, and to his tact and ability at that time the school owes much.

Only those closely connected with him, for he is inclined to hide his light under a bushel, know the work be has done from the very commencement of the war for the wives and families of the men at the front. For the past two years he has acted as chairman of the local Pensions Committee, and it is enough to say that his idea of chairmanship consists in a great deal more than simply being an ornamental, figurehead. He found the committee possibly one of the most inefficient in all Ireland, and now he leaves it, with the assistance of the secretary, Mr. Woods, one of the most efficient and well managed in the country.

Somehow we do not like to think of Lisburn without James Carson, but we cannot consider him as having gone away, and will look forward with confidence to often in the future seeing his familiar figure in the streets of our town.

(This article was originally published in the Lisburn Standard on 18 April 1919 as part of a series which ran in that paper each week for several years. The text along with other extracts can be found on my website Eddies Extracts.)

Posted by an extract of reflection at Thursday, April 18, 2013