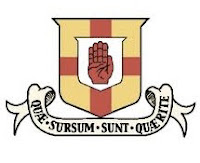 Biography is one of the most interesting departments connected with the republic of literature. The life of Lord Byron, by Thos. Moore, which came out in 1830, and the first edition of which appeared in two quarto volumes at two guineas each, became very popular, and the extracts from it, as given in the newspaper press, were read with an interest that had never before been equalled. Sir Walter Scott's biography, written by his son-in-law, J. Gibson Lockhart, was published in seven monthly volumes in 1837-38, at half-a-guinea each, and was hailed with acclamation throughout the literary world.

Similar works, regarding the lives and labours of lesser lights in the firmament of authorship, have since been published, but how rarely do we meet with any biography of the school Teacher? Yet, who should have a higher seat in the social synagogue than the man or woman that sows the seed of mental thought and general education in the minds of juveniles? A very distinguished member of the old race of schoolmasters was John Gough, the sturdy Quaker, who spent the last sixteen years of his busy life as head teacher of the Friends' School, at the handsome range of buildings situate on the picturesque mound in the immediate vicinity of Lisburn, and known as Prospect Hill.

He was descended from an English family, all of whom for some generations were followers of the creed of George Fox, and first saw the light in the town of Kendal, County of Westmoreland, on the 21st of March, 1721. His father, who was a very well-to-do business man, but not overburthened with brain power, went on his way rejoicing, and as if he considered the turning of a shilling into eighteen pence was an act worthy the special blessing of Providence.

On the other hand, the lady of the house held very different opinions. Possessed of considerable intelligence -- natural and acquired -- she entertained very extended views on mental culture, and determined that her son should have the best education to be had in her locality and, until eight summers had passed over the head of the lad, Mrs. Gough taught him herself. He was then sent to school, where he continued as one of the pupils until he was half-way through his teens. She was very forward in her idea about the dignity of a school teacher, but considered that as her son had all the advantages of a preliminary education he should do the finishing work by careful study.

Young Gough did not forget his home lessons; he was still under twenty when he got an engagement as assistant at a Friends' School in Wiltshire, where he continued till 1750, and had gained a high name, not only as a superior scholar, but for the ability of being able to impart to others all he knew himself. About the close of that year he was induced to cross over to Dublin, and became head master of the Chief School in Dame Street.

The Irish capital was then, as it has continued to be since, the home of sterling hospitality. Its kind-hearted and pleasure-loving citizens delighted in carrying out the National Ceade Mille Failthe in a spirit which the colder blooded denizens of the northern province rarely value its full estimate. For some weeks after having settled in the city watered by the Liffey, the staid sober-minded English Quaker seemed as much at sea as if he had migrated to Timbuctoo.

There was a ray of social sunshine over every face he met, and the musical ring of the Celtic brogue that fell on his ear as he passed through street or square charmed, while puzzling him as that of an unknown tongue. Widely, however, as the society into which he had been thrown differed from any he had ever before encountered, his genial disposition soon led him to value the hearty welcomes he had received, and in some months caused him to feel fairly at home.

At one period of the four-and-twenty years John Gough spent in Dublin, the Earl of Hertford, who had been appointed Lord Lieutenant of Ireland, delighted the gay citizen by the number of entertainments given at the Castle. To one of these the Head Teacher of the Dame Street School was invited. As a man, he felt honoured by the kindness of His Excellency, yet, with his peculiar opinions of society, he could not avail himself of it, but he wrote a reply to the Chief Secretary, requesting that high official to convey his thanks to the Vice-Regal-ruler for his kind attention, but added that the tenets of his Church did not admit of Quakers attending entertainments.

Very peculiar were the ideas of John Gough on the administration of the school room. Corporal punishment was then considered as necessary for the furtherance of education as the reading book or the grammar, but he taught and ruled without the exercise of the rod. Stranger still was his request to the parents of his pupils to let the young people get their lesson at home without coaching, and thus to cause them to depend on self-study and self-reliance.

In the spring of 1774 he accepted the offer of Teacher-in-Chief of the Friends' School at Prospect Hill. We may here state that there was then considerable numbers of Quakers resident in and around Lisburn. George Gregson, a native of Lancashire, had settled there about a century before, and carried on the manufacture of linen in a two-storey thatched house, situate on the site now occupied by the local branch of the Northern Bank. A great many Quaker families that had suffered from persecution in England were living in Lisburn in June, 1690, when William the Third received the troops there, and parsed on to Hillsborough.

John Gough's fame as Teacher-in-Chief at Prospect Hill brought many new scholars to the institute; several of these were from the South of Ireland and a few from England. It was while there that he published his "Teacher of Arithmetic," a work that went through numerous editions, and was the most popular school book that had ever appeared on that subject in Ireland. It was, however, by his final effort in authorship, entitled a "History of the People called Quakers," that John Gough rose to eminence in the literary world.

The work appeared in 1784 in four large octavo volumes, and was hailed with enthusiasm not only by the quiet and worthy people whose annals form its subject but by hosts of readers far outside that sect. It has long been out of print. So far back as 1825 the late John Rogers, who was an extensive grocer, and had a great love of collecting scarce literature, paid two guineas for a copy of the history.

John Gough, in breadth of opinion, and the ability to take extended views on public questions, was considered by some stereotyped members of his church as being rather inclined to heterodoxy in certain subjects outside the Quaker creed. He held a town park, situate on the lands that lay below the schoolhouse, and that field he lent to Captain Ward, of the Second Company of Lisburn Volunteers, where, during the summer season, the men were paraded on Saturday afternoons. For that act of liberality he was severely censured by many of his brethren, who maintained that Quakers should not recognise soldiers, all of whom were only to be looked upon as human instruments of war.

John Gough defended himself by stating that the Volunteers were military citizens, enrolled not as aggressive troops, but as the local power of defence in case of foreign invasion, and in this argument John Hancock, Thomas Lamb, and other Friends joined with him. The field alluded to, now a portion of the Wallace Park, was long known as "Gough's Hill."

About the end of December, 1790, it became evident to the friends of the famous teacher that his end was not far off. Seventy summers had then passed over his head, and illness set in, against which he battled for several months; during that period he continued attending his pupils, as well as to speak at the Society's meetings. In some time, however, he became unable to move about, and in the third quarter of the following year he was attended by Dr. Crawford, the far-famed medical practitioner who resided at the pretty villa near Millbrook. Professional skill, however potent, could not prevail against the fatal disease, and on the 25th of October, 1791, John Gough passed peacefully into the world of spirits.

Three days afterwards a general meeting of the local and many distant members of the Society was held, and the interment took place, in the burial-ground attached to the Meeting-house. Considerable numbers of the inhabitants of Lisburn who were not connected with the people called Quakers attended the funeral; but, as no monumental stone marks where the ashes of the great teacher mingle with their kindred dust, no one at this day knows aught of the spot in the little cemetery sacred to the memory of John Gough. 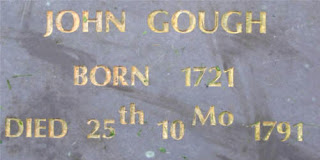 [Reprinted from the "Lisburn Standard" of thirty years ago.  A memorial stone has since been erected in the Friends' burying-ground, Railway Street. -- Editor.]

(This article was originally published in the Lisburn Standard on 25 April 1919. The text along with other extracts can be found on my website Eddies Extracts.)

Posted by an extract of reflection at Wednesday, April 24, 2013