The Annals of Lisburn and Vicinity 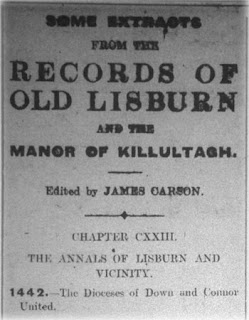 1579. -- Castle-Robin, on the White Mountain, re-built by Sir Robert Norton. Earlier a stronghold of the O'Neills stood on the same site.

1585. -- Sir Shane O'Neill, the Captain of Kill-ul-Tagh, owned the territory of Killultagh, and a stronghold of his is believed to have been situate in what is now known as the Castle Gardens. The Captain joined the Earl of Tyrone in rebellion, was outlawed about 1606, and his estate seized by the Crown and given to General-Conway. Sir Foulke Conway, in 1614, was Governor of Ennis-Loughlin, one of the last of the native forts, situate at Trumra, near Moira.

1586. -- Killultagh is described as "a very fast country, full of wood and bog, bordering on Lough Neagh." The name of Killultagh is used in three senses. First, it is the name of a townland, the fuller name of which is Derry Killultagh. Secondly, there was the territory of Killultagh, an ancient term, defined as the district lying between the River Lagan and Lough Neagh. Sir Foulke Conway received a grant of this territory, other portions were added, and it became known later as the Manor of Killultagh.

1608. -- Sir Foulke Conway received a grant of the territory of Killultagh. Afterwards other lands were added, and it became known as the Hertford Estate. Sir Foulke was succeeded, in 1624, by his brother, Sir Edward, Baron Conway, Viscount of Killultagh. He built, about 1630, the Castle, of which remains still exist in the Castle Gardens. It was destroyed by the great fire of 1707, and never re-built. It was by Sir Foulke Conway, and in his time, that the town was laid out, practically in its present form, in so far as regards Castle Street, Bridge Street, and Market Square.

1608. -- Long prior to 1608, probably before the reign of Queen Elizabeth, there was a small village here, even then known as Lisnegarvey, Linsley Garvin, or Lis-na-Garvagh -- Gamester's Mount. To the North East of the town there was a mount, moated about, and another to the South West, these were surrounded with a great wood, and thither resorted all the Irish outlaws to play cards and dice.

1610. -- The early settlers of Killultagh, brought over by the Conway family, were chiefly from the counties of Worcester, Warwick, and Gloucester. The tradition of the people for long was that their fathers came from "the apple counties" of England.

1611. -- Brookhill, built by Sir Foulke Conway. An earlier building is said to have been erected there by Sir Francis Brook.

1623. -- The church of St. Thomas opened for Divine service, re-named Christ Church, and raised to the dignity of a Cathedral in 1662. It was destroyed by fire twice. In 1641, during the battle of Lisburn, and in 1707, at the time of the great conflagration that consumed almost the whole of Lisburn. Canon Pounden, who was appointed rector in 1884, carried out many extensive improvements, both to the interior and exterior of the edifice, expending thereon some £3,000. He was 62 years in Holy orders, and died in 1917 at the advanced age of 87 years. The church records exist in almost unbroken succession from 1639.

1628. -- A charter establishing the Lisburn markets was granted to Viscount Conway by Charles I.

1641. -- Piper Hill received its name in 1641. During the battle of Lisburn the head of a piper of one of the regiments was blown off and rolled down the hill, hence the name.

1641. -- The battle of Lisnagarvey was fought on the 28th day of November, 1641, when the Irish Rebels attempted to capture the town. The garrison was under the command of Sir George Rawdon. The battle continued from early morning till late into the night, and the town was practically burnt to the ground. Some 200 rebels were slain in Bridge Street, and 300 Castle Street. In their retreat the rebels burnt Brookhill House, containing Lord Conway's library and other goods to the value of five or six thousand pounds.

1641. -- The Old Castle, Hillsborough, erected. It was strongly fortified, and in 1660, it was made a Royal Garrison. King William III., on his march to the Boyne, spent two days in it. From it the king issued the Royal Warrant authorising the payment of £1,200 yearly to the Presbyterian ministers of Ulster.

1644. -- General Munroe made an attempt to get possession of the town of Lisburn, but was frustrated by the vigilance of the garrison.

1648. -- A great victory was obtained by the Parliament's Forces in the North of Ireland, on the Plains of Lisnegarvey, at Lisnastrain, Parish of Drumbeg, against the Royalists and Irish there, wherein were 1,400 slain, Colonel John Hamilton taken prisoner, and seventeen more of quality. The place of the encounter is described as at a "boggy pass," and that Lord Clandeboy was slain or sank in a bog, being corpulent.

1648. -- Derriaghy Church, it is said, was almost destroyed during a battle between the Royalist and Scotch forces. In 1750 the roof was of shingles. The old church enlarged in 1813; the new church consecrated 1872.

1662. -- A Charter, dated 1662, erected the Church of Lisburn into a Cathedral for the United Dioceses of Down and Connor, and empowered the inhabitants of Lisburn to return two Burgesses to the Irish Parliament, which they did till 1802, when the representation was limited by the Act of Union to one member.

1664. -- Portmore Castle, Ballinderry, erected by Lord Conway, on the site of a more ancient fortress. It contained accommodation for two troops of horse, with a range of stabling, 140 feet in length, 35 feet in breadth, and 40 feet in height. It was dismantled in 1761.

1667. -- Bishop Jeremy Taylor died in Lisburn in the year 1667, in a house in Castle Street, almost opposite the entrance to the Cathedral, and was buried at Dromore. He resided at various times at Portmore, Hillsborough, Magheralave, and Castle Street, between the years 1658 and 1667. He was a lecturer in Lisburn Church, and later created Bishop of Down and Connor.

1683. -- Lord Conway died without an heir, and left his Irish estate to Colonel Seymour, who took the name of Seymour-Conway.

1684. -- Sir George Rawdon was possibly the most influential man in Killultagh in the 17th century. He was M.P. for Belfast in 1639, and resided for a time at Brookhill. In 1654 he built a residence in Lisburn, having married in that year, as his second wife, Dorothy Conway, sister of the second Viscount Conway. Rawdon assisted in the defence of Lisburn against the Irish rebels in 1641. He was the ancestor of the Earl of Moira. Died in 1684 and was buried in Lisburn.

1687. -- Rev. Silvanius Haslam, rector of the parish, built a row of cottages which still bears his name -- Haslam's Lane. It was situated a short distance from the Sluice River, which crosses Bow Street, close to the Ulster Bark. At this period the southern section of the town was said to end with the Sluice River, which ran unbridged across the street. The portion afterwards known as Bow Lane, consisted only of a few scattered houses.

1689. -- Lisburn is described as one of the prettiest inland towns in the North of Ireland, and one of the most English-like places in the Kingdom.

1689. -- Duke Schomberg summoned all the gentlemen in the country to meet him at Lisburn, where they presented him with an address, and agreed upon rates for all sorts of provisions which were commanded to be sold according to the Duke's proclamation, but this was very disagreeable to the country people who had been receiving treble rates before for everything purchased from them.

(This article was originally published in the Lisburn Standard on 28 February 1919 as part of a series which ran in that paper each week for several years. The text along with other extracts can be found on my website Eddies Extracts.)

Posted by an extract of reflection at Thursday, February 28, 2013