The Making of the Ulsterman 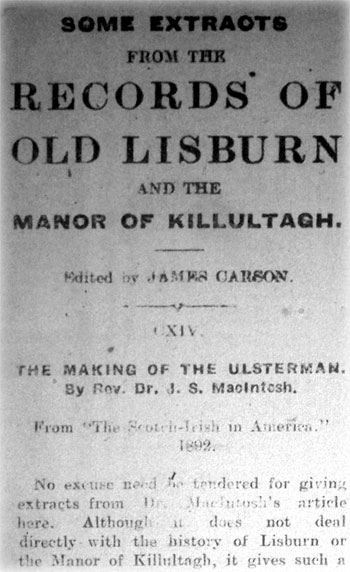 No excuse need be tendered for giving extracts from Dr. MacIntosh's article here. Although it does not deal directly with the history of Lisburn or the Manor of Killultagh, it gives such a vivid and moving picture of the people, elements, and conditions, that went to build a complex character known as an "Ulsterman," but it should be of absorbing interest to all those who bear that proud title.

Dr. MacIntosh was born in Philadelphia educated in Europe, and pastor of the historic Tennant church, Philadelphia.

The article was first delivered as an address before the Scotch-Irish Society of America in 1890.

Possibly, if the Doctor was writing today he would dwell less on the bitterness and hatred towards England engendered in the hearts of the Ulstermen, who were driven from their homes in Ulster by intolerable injustice, and of the same sentiments living in the hearts of their descendants. The Ulsterman is not given to brood over the past and foster in his heart bitterness for ancient wrongs. He is eminently practical. He is also long-suffering but brooks injustice reluctantly. He entertains no delusions about national aspirations and sentimental grievances. The world is his home. He is not an islander, but an Imperialist, not Irish, but British.

The concluding words of the address are prophetic -- "and as he was found at Derry, so to-day and forever, when his country, wherever that may be shall call, he will be found, the first to start and the last to quit."

As it was then, so it is today.

At the first trumpet blast of war in 1914, the Ulsterman forgot past wrongs and present injustice and at the call of Empire sprang instantly to arms, fit representatives of the grand old stock. The blood-stained fields of France and Belgium know the heroic Ulster division. The Ulstermen -- "first to start and the last to quit."

The Ulsterman has had surprisingly little place in literature. it has been truly said by an English traveller, "With one or two exceptions, we can not recall any books in which the Ulster character is described." Yet the bold, bluff folk that lie between the Giant's Causeway and the Mourne Mountains have a history, a character, a humour, a folk-lore, and a future strangely interesting and largely unique. This hardy race, who are the people of liberty and law, of utility and order, will certainly carry you back to your forefathers, because of their Norse daring, their Pictish hardiness, their Saxons sagacity, their tough British endurance, and the Lowlander's painful thrift, deft management, clear-grained reality, outspoken truth, stubborn self-will, defiant straight-forwardness, unyielding patience, and far-sighted common sense; but they also make you see that they have somehow grown away and distant from their nearer and farther "forbears," and now stand out the clean-cut and truly "kenspeckle" Ulstermen.

The question comes was force to us. What made the man of Ulster different thus remarkedly from the man of the Lowlands, to whom he is most closely joined by all those bands that seem to insure unchanging likeness? No one, it would appear, has ever tried seriously to answer this singularly interesting racial question. We shall, however, here try to trace the steps from Lowlander to Ulsterman, and from Ulsterman to Scotch-Irishman. This pathway of history may show us what made them to differ. Our study is, then,

The Marks and Making of the Ulsterman.

In skilfully managed nurseries and gardens, trees and flowers of value are made pass through three stages of special care. First there is the Seed-bed, then there is the Plantation in the "hardening-off" ground, and then there is the final Transplantation to the chosen spots where they grow and fruit and flower. This real "plant of renown" has been just thus treated by the divine Husbandman of humanity. The Lowlands of Scotland where the seed-bed; the rocky hills and not over-rich valleys of Ulster were the veritable "hardening-off" ground, where the plant grew "strong and stocky;" and this broad land of America has been the resting place," where the God-sown, God-grown plant has matured and fruited and filled the land.

Look for a few moments on the seed-bed of our race. That seed-bed is the Lowlands of Scotland.

What an all-wondrous work-field of the God of history it is! What ages of divine toil unfold as we gaze; what upheavals of old landmarks, and what strange resettlements of invaders and invaded; what curious blendings and re-blendings of both allied and antagonistic races; what steady play of peace and war; what free blood-sheddings and marvellous weddings; what strange speech and diverse tongues -- Norse, Saxon, Frisian, British, Erse, and Norman -- till at last sounds the fresh, strong, early English!

This seed-bed lies water girt; the fact is significant. For those waters at once open gates and barriers of defence -- give us the history, the education, and prophecy of the mingling folks that last made their home in the south of Scotland and in the north of England. Let us set the district and its boundaries clearly before our eyes. If you look on the map of Scotland you will mark how two great sea-arms cut the country into a northern and southern part. These two great water-ways are the Firths of Forth and Clyde. If you look on the map of England you will mark two other sea-arms that sever the upper part of England from the midland and the south; these two water ways are the Humber and the Solway. Between Forth and the Clyde and the Humber and the Solway lie the old Strathclyde and Northumbria. To the right and left of the Strathclyde and Northumbria are the Irish and the German seas. Across these seas and up those channels came the freshest, boldest, richest, and most varied blood of Europe's kings and vikings, heroes and saints, scholars and singers, rovers, traders, and hunters -- the very pick of pioneers. They were the first Scots from Dalriada in the north of Ireland; they were the Norsemen and the Dane, the Saxon and the Frisian, the Belgian, and later the Norman-French. They found within that water-girt, Strathclyde and Northumbria, the remnant of that splendid older race, whence was Arthur, of the Round Table (and ancient Briton of the Strathclyde -- man of faith and fancy, of unyielding toughness and ever-starting life, and the woman of home grace and poetic power, of song and self-sacrifice. It has, until later years and more thorough search, been told that the old Briton died out or fled into the hidings of the Welsh hills. But the facts are other; and as Freeman and Skene, with now a band of young race-students have made clear, the old race was not blotted out; many were forced from the sea borders to the inland parts, but many men and more women stayed, or were held by the invaders to serve as the serfs or become the mothers of a new folk. To this  [--?--] in the Strathclyde, and on both sides of the Borders, by none of the invasions of these parts, not even the Danish and the Norman, were the old Britons of the Arthur myths and sagas either destroyed or driven out. That rich and worthy old race formed the stock; into it were grafted the young, fresh, and in many respects, nobler branches, and the new shoots and the later fruits are the Lowlanders of Scotland. Here is where the Celtic blood comes into our veins, and not from a later hour and from Ireland. For the large enrichment ever brought by the Celt we must thank the Britain of Arthur, and not the clansman of the O'Neil.

Briton and Norman, and Saxon and Dane, gave the world a new man, the Border soldier, the pioneer, the sea-rover, the inventor, the statesman, the revolutionary the singer in Robert Burns, and the romancer in Walter Scott. And nothing in the witching tale of folk-building and folk-breeding is more wonderful than the long toil in making that Lowland people. As Skene shows at the time of Alexander III, the population of Scotland was composed of six chief races, Picts, Britons, Scots, Angles, Norsemen (including Danes and Norwegians), and Frank0-Normans, "forming a people of very mixed descent, in which the Teutonic element was more and more predominating." In the Lowlands "the native base of this Brito-Scoto-Anglo-Norman people was the Romano Britain." Freeman, in his history of the Norman Conquest, and in his story of "The English People and Their Three Homes," shows us "that we adopted, assimilated, absorbed alike the conquerors and the conquered into the very essence of and national being."

But through and through the old Briton survived till the final fusion, so all-important to us, in the one rich-blooded Lowland folk. To that rare blood the scholarly Scot from Dalriada, the pliant, large-limbed Pict, the poetic Celt, the shrewd, acquisitive Anglo-Saxon, the patient Frisian, the daring Dane, the breezy Jute, the organising, systematic feudal Norman, but each his contribution. Who the Dalrind Scot and the large-framed, ruddy-faced Pict of Galloway were originally we cannot yet tell, but what they were in soul features has been made clear as daylight -- they were Christianized people, loving books, using schools, marked by free speech, by arts and song. They show many points of close affinity with the original Briton; fused with the Briton they were so open to the influences of Teuton and Norseman the Anglo-Saxon speech and society, thrift and industry firm rule and personal independence, soon became their common property and features. The old British speech begins to fade out; the folk-speech from Northumberland to the Clyde and the Forth is northern English or "Lowland Scotch;" and the future man of Bannockburn and Derry Walls and Kings Mountain is beginning to appear. He is the man with the blood of the borderer and soldier, mixed with that of the scholar and thinker, with the blood of the trader and farmer, mixed with that of the statesman and the lawyer. These combining and contrasting features soon began to show themselves. From that 25th day of April, 1057, when Malcolm Canmore was crowned at Scone near Perth, till the death of David, the first feudal king of Scotland, the combined contrasted features are slowly getting into harmony and order, and about the opening of the thirteenth century the Lowlander more and more shows himself. For about two centuries he settles, strengthens, solidifies.

During This "Fixing" Period

The Lowlander is tested and hardened and purged by battles with soil and weather, battles with southern English and northern Gael, battles with poets and princes. During that fixing period he wrestles with poverty and politics, and confessions and theology, and at last, under the sealing and finishing hand of Knox, who stands forth the man fitted to look every rival in the face, and hold his own in war and peace, mid-arctic snows or torrid heat. Behold him the Scot of to-day -- shrewd and thrifty, free and fearless, resolute and revolutionary, clear-thoughted and defined in conscience.

He multiplies and he fills the little Strathclyde from end to end. The place grows too straight for him. There is no field for his energies. As in the days of hardy Caleb, the cry is for room.

(This article was originally published in the Lisburn Standard on 20 December 1918 as part of a series which ran in that paper each week for several years. The text along with other extracts can be found on my website Eddies Extracts.)

Posted by an extract of reflection at Friday, December 21, 2012