Maps of Lisburn and the Hertford Estate 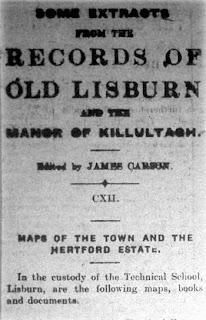 
MAPS OF THE TOWN AND THE HERTFORD ESTATE.

In the custody of the Technical School, Lisburn, are the following maps, books and documents.

Two large maps of the Hertford Estate, bearing dates, 1726 and 1729. On the maps are laid down the townlands and holdings with names of occupying tenants. The maps are in a good state of preservation.

Maps of Town Parks, 1835-1863, bound is one volume. On the maps are laid out the holdings and occupiers' names.

Survey of the Hertford Estate by Thos Pattison -- 1833 -- bound in eleven volumes.

Sundry documents relating to Sale of Water and Markets, by Lady Wallace, 1896.

Particulars and valuation of the Town Parks in the Lisburn District, 1829.

About the year 1901 when the Hertford office was closed, and the building occupied as the Town Hall and Urban Council Offices, the accumulation of maps, books, documents, etc., belonging to the Estate were disposed of. Some were sent to Mr. Capron, the agent in London, a portion went to the Estate solicitors -- Longfield, Kelly and Armstrong, Dublin and Dungannon. Mr. George Sands, C.E., retained a portion, and the residue was handed over for safe keeping to the Urban Council. The consignment given to the Urban Council was stored temporarily in the Castle House, Castle Street. In 1914, on the building being taken possession of by the Technical School, the books and documents were removed to the Dispensary Yard, next door, and there, through carelessness, indifference, or lack pf knowledge of their value, this invaluable collection of books and papers containing the ancient history of the town and district was wantonly destroyed -- burnt.

On Mr. Sands' decease towards the end of 1917, his representatives presented the Technical School with the two large maps, the bundle of sundry unbound maps, sixteen volumes of maps, Proceedings of the Court Leet, House of Lords proceedings re Water Bill, and bundle of documents re sale of market and water rights.

The residue of Estate maps and documents left by Mr. Sands were transferred to the office of the Wallace Estate solicitors, Dungannon. Amongst them were valuable maps and records relating to the Manor of Killultagh. To the future historian of Lisburn one work would be of particular value, and there were several copies of it amongst the consignment sent to Dungannon, a detailed account and valuation of the whole Hertford Estate, made about the year 1870, giving particulars of all public buildings, churches, schools, bridges, etc., etc., extent of holdings on the Estate, rents and names of tenants, etc.

The 1726 map shows that the old bridge over the Lagan was situate some thirty yards or so nearer the Island Mill than the present structure at the end of Bridge Street. One of the old roads from Belfast passed through Hillhall, and continued down what is now known as Gregg Street the old bridge being at the end of Gregg Street. The 1835 map shows the bridge is at the end of Bridge Street. This bridge was afterwards replaced by the Union Bridge, exactly on the same side.

The Causeway End road is of considerable antiquity. It must originally have been made through a moss, or bog, and during the course of time the moss was cut away on both sides, leaving the roadway standing up high above the neighbouring country. On the 1726 map the district between the road and the railway was even then marked as "cut out moss."

In 1835 the main roads about Lisburn were all in existence, as the Dublin, Antrim, Moira, Ballinderry, Belfast, and Belsize Roads are all shown on the 1835 map. A road also appears nearly, but not quite, on the line of the present North Circular Road. Its course would appear to have been from the Intermediate School on the Antrim Road straight to the end of Railway Street, near the and station, and thence up past Prospect Hill School. The Railway Company afterwards defeated the [--?--] of this road and constructed the North Circular Road.

Railway Street first appears under this name on a map date 1844.

Up till 1850 Antrim Street was known as Antrim Lane.

The "Deans Walk" Wallace Parks, makes its first appearance on a map dated 1846.

The maps of 1726 and 1833 show a fort as situate a short distance beyond Pipers Hill, slightly in the direction of the river. There is also the well-known fort, Fort Hill, behind the Friends' School.

On the 1833 map the "Long Stone," which gives its name to Longstone Street, is marked as at the corner of Longstone Lane. On this map appears "Polite Barracks" quite close to the Chapel, on the same side of the street, in the direction of the Dublin Road. The "Rookery" was the name of a street or lane that must have passed from Smithfield out on to the Hillsborough Road, on the line of the wall that divides the markets from Christ Church grounds. Market Street was known as the "Old Shambles." The "Black Hole" of Lisburn was in Smithfield, situate at the back of Hugh Kirkwood's premises.

The Market House, Market Square, The Hertford Arms at the corner of Jackson's Lane or Railway Street. The King's Arms Hotel on the left hand side of Market Square going towards Bow Street, the Linen Hall at the corner of Linen Hall Street, the New Market on the site of the present grain market, the Methodist Chapel in the "Old Shambles," Market Sq. Church, surrounded by buildings then as it is now, all appear on this old map of 1833.

Advancing up Castle Street with the same old map open, on the left-hand side Johnston's Entry is reached, and close to it on the main street stands the Post Office. A short distance further, on the right is the Rectory, and opposite stands the Court House, one time the "French Huguenot Church; now the Urban Council Offices.

Where the Technical School now stands stood the "Marquis' House," and next door the Estate Offices. Opposite was the Castle Gardens.

Seymour Street must have been a later creation, as from Market Square to the Low Road, the whole street is called Castle Street

Just before coming to the Infirmary, Beggars' Lane is met with, and it appears to run right through to within a short distance of the Basin in the Wallace Park.

At the junction of the street and the Belfast Road stood the two old schools which was dismantled and taken down this year, 1918.

In front of the Infirmary, on the opposite side of the street, stood a fountain, probably, a pump.

The Cathedral of course occupies its ancient and prominent position in the centre of the town.

The maps of 1726 and 1833, and a still more ancient one, all tend to show that the town as laid out by Sir Foulke Conway, almost three hundred years ago, conforms in general detail to the Lisburn of to-day. Castle Street was constructed much as it is now, only that it encroached on, and practically included, the modern Seymour Street, and was named after the Castle in the Castle Grounds. The Cathedral stood then where it stands now, and Market Square, with its Market House, in the centre was there, and Bridge Street leading down to the bridge over the Lagan.

Of later date, but still hoary with the passing of the years, are Haslam's Lane, Piper Hill, and Bow Lane or Bow Street, then Jackson's Lane or Railway Street, the "Old Shambles" now Market Street, Chapel Hill, Longstone, Linen Hall Street, Antrim Lane now Antrim Street, Wardsboro opening out of Jackson's Lane, and Tanyard Lane opening into Bow Street. There were also innumerable lanes, alleys and courts, pestilential cul-de-sacs most of them opening, out of the principal streets, and inhabited by human beings, but dens not fit for the habitation of animals. Fortunately, with the march of time, many of these, and the worst of them, have bean condemned and removed, and it is to be hoped that those that remain may soon share the same fate.

Bachelors Walk is quite modern. Prior to 1870 it was only a narrow path bordered on both sides by trees, and connecting Railway Street with Antrim Street. As its name denotes, it was a favourite promenade with young men and maidens amorously inclined.

Such are a few of the outstanding features of our town that catch the eye in looking over these old maps of a bygone day and generation.

(This article was originally published in the Lisburn Standard on 6 December 1918 as part of a series which ran in that paper each week for several years. The text along with other extracts can be found on my website Eddies Extracts.)

Posted by an extract of reflection at Thursday, December 06, 2012