The Huguenots by Samuel Smiles 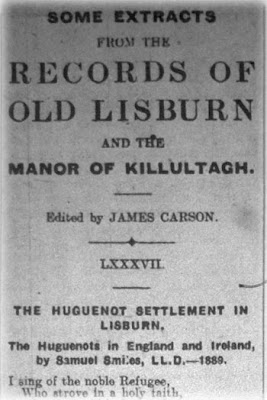 
I sing of the noble Refugee,
Who strove in a holy faith,
At the altar of his God to bow,
When the road was marked with death.

How vain was the flight in the wild midnight
To the forest's inmost glade,
When the holy few, to those altars true,
On the green sward knelt and prayed!

When the despot's sword and the bigot's torch
Had driven him forth to roam
From village, and farm and city, and town,
He sought our Island Home.

And store of wealth and a rich reward
He brought in his open hand,
For many a peaceful art he taught,
Instead of the fireman's brand.

And boldly he fought for the land he'd sought
When the battle-storm awoke.
In the tented field of the guarded fort,
Or on board or "Hearts of Oak."

And dear to him now is the red crossed flag
(His ancient hate and fear);
And well does he love his adopted land
And the friends who've welcomed him here.


The Northern counties of Down and Antrim were, more than any other parts of Ireland, regarded as the sanctuary of the refugees. There they found themselves amongst men of their own religion -- mostly Scottish Calvinists, who had fled from Stuart persecutions in Scotland to take refuge in the comparatively unmolested districts of Ulster. Lisburn, formerly called Lisnagarvey, about ten miles south-west of Belfast, was one of their favourite settlements. The place had been burnt to the ground in the civil war of 1641; but with the help of the refugees, it was before long restored to more than its former importance, and became one of the most prosperous towns in Ireland.

The government of the day, while they discouraged the woollen manufacture of Ireland because of its supposed injury to England, made every effort to encourage the trade in linen. An Act was passed with the latter object in 1697, containing various enactments calculated to foster the growth of flax and the manufacture of linen cloth. Before the passing of this Act, William III., invited Louis Crommelin, a Huguenot refugee, then temporarily settled in Holland, to come over into Ireland and undertake the superintendence of the new branch of industry.

Crommelin belonged to a family that had carried on the linen manufacture in the various branches in France for upwards of 400 years. He had himself been engaged in the business for more than thirty years at Armancourt, near Saint Quentin in Picardy, where he was born. He was singularly well fitted for the office to which the King called him. He was a man of admirable business qualities, excellent good sense, and remarkable energy and perseverance. Being a Protestant, and a man of much foresight, he had quickly realised what he could of his large property in the neighbourhood of St. Quentin, shortly before the revocation of the Edict of Nantes; and he had migrated across the frontier into Holland before the bursting of the storm.

In 1698 Crommelin, having accepted the invitation of William, left Holland, accompanied by his son, and shortly after his arrival in England he proceeded into the North of Ireland to fix upon the site best but adapted for his intended undertaking. After due deliberation he pitched upon the ruined village of Lisnagarvey as the most suitable site for his purpose. Crommelin's first factory was at the foot of the wooden bridge over the Lagan, and his first bleaching-ground was started at the place called Hilden. The King approved of the selection, and authorised Crommelin to proceed with the operations, appointing him "Overseer of the Royal Linen Manufactory of Ireland." In consideration of Crommelin advancing £10,000 out of his own private fortune to commence the undertaking, a grant of £800 per annum was guaranteed to him for twelve years -- being at the rate of 8 per cent. on the capital invested. At the same time, an annuity of £200 was granted to him for life, and £120 a year for two assistants, whose duty it was to travel from place to place and superintend the cultivation of the flax, as well as to visit the bleaching-grounds and see to the proper finishing of the fabric.

Crommelin sent invitations abroad to the Protestant artizans to come over and join him, and numbers of them responded to his call. A little colony of refugees of all ranks and of many trades was soon planted at Lisburn, and the place exhibited an appearance of returning prosperity. With a steadiness of purpose which distinguished Crommelin through life, he devoted himself with unceasing zeal to the promotion of the enterprise which he had taken in hand. He liberally rewarded the toil of his brother-exiles, and cheered them on the road to success. He imported from Holland a thousand looms and spinning-wheels of the best construction, and gave a premium of £5 for every loom that was kept going. Before long he introduced improvements of his own in the looms and spinning-wheels, as well as in the implements and in the preparation of the material. Every branch of the operations made rapid progress under the Huguenot chief -- from the sowing, cultivation, and preparing of the flax through the various stages of its manipulation, to the finishing of the cloth at the bleachfield. And thus by painstaking skill and industry, zealously supported as he was by his artisans, Crommelin was shortly enabled to produce finer sorts of fabrics and had ever before been made in Britain.

Crommelin, amongst his other labours for the establishment of the linen trade, wrote and published at Dublin, in 1705, "An Essay towards the Improving of the Hempen and Flaxen Manufactures of the Kingdom of Ireland," so that all might be made acquainted with the secret of his success and enabled to follow his example. The treatise contained many useful instructions for the cultivation of flax in the various stages of its planting and growth, together with directions for the preparation of the material and the several processes of spinning, weaving, and bleaching.

Though a foreigner, Crommelin continued throughout his life to take a warm interest in the prosperity of his adopted country; and his services were recognised, not only by King William, who continued his firm friend to the last, but by the Irish Parliament, who from time to time voted grants of money to himself, his assistants, and his artizans, to enable him to prosecute his enterprise; and in 1707 they voted him the public thanks for his patriotic efforts towards the establishment of the linen trade in Ireland, of which he was the founder. Crommelin died in 1727, and was buried beside other members of his family in the churchyard at Lisburn.

The French refugees long continued a distinct people in the neighbourhood. They clung together, associated and worshipped together, frequenting their own Huguenot church, in which they had a long succession of French pastors. [The Rev. Saumarez Dubourdieu, grandson of the celebrated French pastor of the Savoy church in London, was minister of the French church at Lisburn for forty-five years, and so beloved in the neighbourhood that, at the insurrection of 1798, he was the only person in Lisburn whom the insurgents agreed to spare. The French congregation having become greatly decreased, by deaths as well as intermarriages with Irish families, the chapel was at length closed. It is now used as the courthouse of Lisburn. The pastor Dubourdieu joined the Established Church, and was presented with the living of Lambeg. His son, rector of Anahilt, County Down, was the author of "A Statistical Survey of the County Antrim," published in 1812.] They carefully educated their children in the French language, and in the Huguenot faith, cherishing the hope of being enabled some day to return to their native land. But that hope at length died out, and the descendants of the Crommelins eventually mingled with the families of the Irish, and became part of parcel of the British nation.

Among the other French settlers at Lisburn was Peter Goyer, a native of Picardy. He owned a large farm there, and also carried on an extensive business as a manufacturer of cambric and silk, at the time of the Revocation. When the Dragonnades began, he left his property behind him and fled across the frontier. The record is still preserved in the family of the cruelties practised upon Peter's martyred brother by the ruthless French soldiery, who tore a leaf from his Bible and forced it into his mouth before he died. From Holland, Goyer proceeded to England, and from thence to Lisburn, where he began the manufacture of articles for which he had acquired so much reputation in his own country. After a short time he resolved on returning to France, in the hope of being able to recover some of this property. But the persecution was raging more fiercely than before, and he found that if captured he would probably be condemned to the galleys for life. He again contrived to make his escape, having been carried on board an outward-bound ship concealed in a wine-cask. Returned to Lisburn, he resumed the manufacture of silk and cambric, in which employed a considerable number of workmen. His silk manufacture was destroyed by the rebellion of 1798, which dispersed the workpeople; but that of cambric survived, and became firmly founded at Lurgan, which now enjoys a high reputation for the perfection of its manufactures.


(This article was originally published in the Lisburn Standard on 14 June 1918 as part of a series which ran in that paper each week for several years. The text along with other extracts can be found on my website Eddies Extracts.)