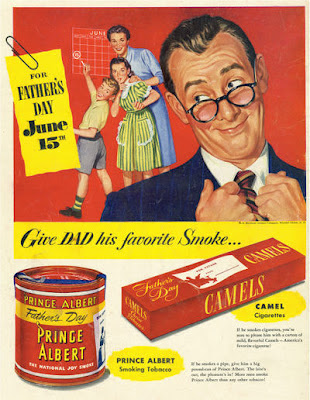 So... did you know the dandelion is the symbol for Father's Day?

Or that not everyone was for a Father's Day to begin with?

This little extract transcribed from a story in the Hull Daily Mail of Saturday 25 July 1931 posted by the British Newspaper Archives is rather telling.

Hmm... and is that a forwarning of Twitter in there...

FATHER has long been the butt of stage humorists. His peculiarities have been shown up to an almost distressing degree, but somehow he always comes out trumps by virtue of the fact that he pays the bill for whatever is needed by his up-to-date sons and daughters. Often enough his wife has a modicum of sympathy for the Head of the house -- perhaps because she knew him when he was quite as smart, and quite as up to date, according to the times, as the progeny who now twit him with his alleged shortcomings. Love, coupled with common-sense, conquers a whole heap of supposed frailties and shortcomings.

The latest horror coming to fathers, however, is something the specie should stand up against. It is nothing less than a Father's Day, to be known as Remembrance Day. The idea is American, of course, for no other country could think of such a thing. It is a shopkeepers' follow-up of the Mothers' Day -- successful, we believe, because of the very natural love every human being must bear for a mother. In this case, however, there is a snag -- and very substantial snag -- in that the scheme is engendered by haberdashers, tobacconists, and others who deal in men's goods. Being of American origin, the poor but honest purveyor of spirituous liquor does not find a place in the programme. It does not need much imagination to realise what hopeless things in the way of shirts and pyjamas daughters just fresh from college will produce on Remembrance Day, to say nothing of the "smokes" the son and heir thinks would suit dad, who will, of course, have to pay for it all, indirectly if not otherwise.

Remembrance Day is too terrible a picture to conjecture. If there is any real means to put it on a firm basis in England, then fathers must at once band together to repel it. Many less horrors have caused revolutions. It is hard enough in these days to find money for father's real needs, let alone what supercilious sons and daughters thinks he needs. The only redeeming feature about this hundred per cent. tradesmen's outfit is that the emblem chosen for the day is the dandelion -- a flower which grows better for being trampled on. No truer token could possibly have been picked.


See the original BNA post here.   Image from Found in Moms Basement.
Posted by an extract of reflection at Sunday, June 17, 2012