Find My Past - the TV show 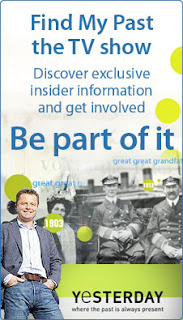 The folks at findmypast.co.uk are taking to the airwaves with a new TV series called - aptly enough - Find My Past the TV show.

Each week, in a 10-part series, it take three members of the public on a journey to discover how they are related to someone from a significant historical event, by searching the records on findmypast.co.uk. It follows each of them as they uncover who their ancestor is and the part they played in history before uniting the participants to find out how they are connected.

The show, which will be presented by the BBCs Chris Hollins, is to be screened on Thursdays from 20 October 2011 at 9pm on the Yesterday channel: (Freeview channel 12, Sky 537, Virgin Media 203).


Links:
Find My Past the TV show
Yesterday TV
Posted by an extract of reflection at Tuesday, October 18, 2011