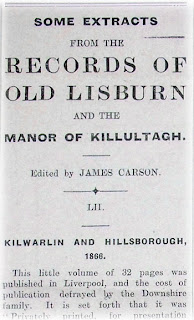 This little volume of 32 pages was published in Liverpool, and the cost of publication defrayed by the Downshire family. It is set forth that it was "Privately printed, for presentation only," and the author signs himself "A Former Resident."' The volume is the result of a large amount of careful research and observation. The first 21 pages deal with Kilwarlin, and. the author Las taken considerable trouble to define accurately the past and present boundaries of the territory. The remainder of the book contains a history of the Hill and Downshire family, with a poem entitled "Hillsborough Town," describing the festivities that took place in that town on the occasion of the marriage of the Marquis in 1837.

Mr. George Allen, the Estate Office, Hillsborough is the possessor of a copy of this book, which contains in addition to the printed matter valuable and copious manuscript notes from the pen of Mr. Smyth, of the same office, dealing with the genealogy of the Downshire family. J. W. Kernohan, M.A., Presbyterian Historical Society, also possesses a copy of the volume.

The following note is printed at the foot of page 23:--


"Some years ago the writer compiled a Pedigree History of the Earls Conway of Lisburn, showing the descent of blood, property, name, family honours, &c., with illustrations. It was intended to follow it up by tracing in like manner the family history of James Hamilton, Earl of Clanbrassil and Viscount Clanboye; but the former was not printed, and the latter was never completed."

Kilwarlin was one of the great territories of the County of Down, some of which have become modern Baronies. Dymmok's Treatise on Ireland, 1600, refers to it as "Mac Roris Cuntry."

Killultagh, or Derry-Killultagh -- the oak-wood of Ulster -- was described in 1515 as "the great, forest Keylultagh."

In 1586, Lord Burghley in his Description of Ulster says:-- "Kilwarlyn, boundinge uppon Kilultagh, is a very fast a woodland, the capten thereof by sirname is a McGenis, called Ever McRorie." The Irish Inquisitions, 1631, No. 29, state that it comprised forty-five townlands, but the Maze was said to contain two and a half.

Killultagh in the County of Antrim includes tho Parishes of Crumlin, Glenavy, Ballinderry, Aghagallen, Aghalee, Magharemesk, Lisburn, Magheragall, Tullyrusk, and part of Derriaghy.

Bryan McRowry Magennis alienated in 1611 to Colonel Moyses Hill seven townlands. His son and grandsons in the following 25 years alienated the remainder of the property. Irish Inquisitions, Nos. 31, 54, 59, 60.

In the Down Survey by Sir William Petty, 1655, the name Kilwarlin is restricted to a parish. The Chapelry of Crumlin had formerly been a portion of the large parish of Drumbo, but in Petty's time it was the parish of Kilwarlin or Crumlin, now Hillsborough. Larcom's History of the Down Survey.


Spencer's Bridge is so called from, the house of Captain Henry Spencer, which stood on the Antrim side, and is mentioned by Petty. He was a contemporary officer in Queen Elizabeth's army with Sir Fulke Conway and the governor of the Fort of Innisloughlin.

Barrack Hill was a street of Hillsborough in which there were barracks; the Warren Gate originally led to a rabbit warren, and at the Union locks the Lagan blends with the canal. The Hollow Bridge is over a defile so deep that there is a descent even; to the crown of the arch, and such names as McKee's Bridge, Halliday's Bridge, &c., are derived from neighbouring residents. Rock's Hill, the hill with projecting rocks, is often improperly pronounced Rogue's Hill; and there is a Gallow s Burn at the entrance to Dromore, where executions formerly took place.

The term "Hillsborough" referred originally to the town, not to the parish. Harris in his History, so late as 1744, calls it Crumlin Rectory, "the Chappel of St. Malachy at Hillsborough." The term Hillsborough seems to have been first applied to the Manor 1651, then to the Fort 1661, yet still there was no town, or even village. When Sir Wm. Brereton -- Brereton's Travels, by Hawkins -- passed it by in 1635 he found nothing to notice.

The visit of King William III. to Hillsborough is referred to. Authorities -- Diary of Dean Davies, by Caulfield; Three Months' Royal Campaign in Ireland, 1690, by Samuel Mullenaux, M.D.; A True and Impartial History, 1691, by Rev. George Storey.

The ancient family mansion appears to have stood just to the south of the limits of the Small Park. Harris records that it was destroyed by fire, and that barracks were erected on its site. The remains of these were visible up to 1825, and the street which led past them on the way to Moira was called Barrack Street or Barrack Hill. It contained the residence of Mr. Hugh McCay, attorney, and of Miss Stott, who was murdered along with her maidservant in 1825. In it also was the Quaker Meeting House, which on the Ordnance map 1837, is represented as standing alone. About 1826 the street was obliterated, the Moira road being made to diverge southward from its contact with the park wall. The triangle included by Barrack Hill and its continuation, the new piece of road, and the line to Dromore, was added to the private grounds. Near the bridge at the bottom of Barrack Hill stood the old church of Crumlin, and its graveyard, or "God's Acre," formed part of the present Small Park and of the pleasure grounds attached to the house. The ruins were visible in 1744, but the church had been removed to its present site in 1662 by Colonel Arthur Hill. The present beautiful structure, however, was not erected till 1773. It is a becoming memorial of the munificence of the first Marquis. There was a large willow tree, sometimes called the Kate Rush Tree, which marked the site of the old graveyard. It was blown down in the great storm of 6th January, 1839, when portions of human bones were exposed amongst its roots. There is a tradition that the tree was named after a "simple" girl named Kate, who wandered about the country. She amused herself by constantly plaiting rushes, till her proper surname was almost forgotten. She also walked on foot to Crumlin with all the funerals of the neighbourhood. On the day when she was carried to her own last resting-place, about 1792, a young man stuck at the head of her grave a willow twig, which grew into a great tree, hence the name the "Kate Rush" Tree.

It would appear from Harris that the lower part of the town was first built, and the upper portion not much more than a century ago. Between them was a hill so precipitous before it was cut that the wonder is why it was made the street of a town, or why people thought of erecting houses at its sides.

Harris further refers to the intention of Lord Hillsborough to build a new mansion house and a new town -- the town to be built in the form of a large square, with a stately market-house in the centre. A very expensive brewery, with malt-houses, consisting of two large squares, was erected by the late Lord contiguous to the town, which hitherto had not been converted to that use.

Prior to 1800 there were frequent contentions between the Broomhedge men and Hillsborough or Kilwarlin men over the right to get turf from the Maze Moss. They usually fought with quarterpole and singlestick. In 1775 some bayonets stolen from Hillsborough Fort were used. David Gray, of Broomhedge, was stabbed. Tom Bulger, of Hillsborough, was executed for the murder.

'TWAS PRETTY TO BE IN BALLINDERRY.

This beautiful ballad is from the pen of Alfred Perceval Graves. It appears in his "Irish Poems" -- Countryside Songs and Ballads -- 1908, and is set to music in "Songs of Old Ireland." Padric Gregory considered it worthy of a place in his "Modern Anglo-Irish Verse," 1913. Mr. Graves was the son of the Protestant Bishop of Limerick. He has produced numerous poems, songs, and ballads. "Father O'Flynn" was written by him. He was an Inspector of Schools, from which position he retired in 1910.

'Twas happy to be in little Ram's Island,
But now 'tis as sad as sad can be:
For the ship that sailed with Phelimy Hyland,
Is sunk for ever beneath the sea,
Ochone, ochone!
Ochone, ochone!
And 'tis oh! but I wear the weeping willow
And wander alone by the lonesome billow,
And cry to him over the cruel sea,
Phelimy Hyland, come back to me!

THE RETURN OF PHELIMY HYLAND.

This sequel to "'Twas Pretty to be in Ballinderry" was written by James N. Richardson, author of "O'Neill of Munster," 1880; "The Baron's Dream," 1887; "Reminiscences of Friends in Ulster," 1915; "The Quakri at Lurgan," 1887; "The Quakri at Lurgan and Grange," 1899. Mr. Richardson is a member of the Society of Friends, is closely related to several well-known Lisburn families, was born in 1846, represented the County of Armagh in the Imperial Parliament, 1881-1885, and resides at Bessbrook, Newry.

'Twas happy to be in bonnie Ram's island,
'Twas happy in Aghalee,
But now 'tis as sad as sad can be,
For the ship that carried Phelimy Hyland
Is sunk for ever beneath the sea.
And 'tis I that wear the weeping willow
And wander alone by the lonely billow,
Calling over the cruel sea--
Phelimy Hyland, come back to me.

The long years rolled o'er Ballinderry,
The long, long years o'er Aghalee,
And the boys and the girls again were merry
Trysting under the ivy tree.
But I never went to bonnie Ram's Island
Since the day I parted Phelimy Hyland--
Phelimy Hyland, mine no more
Till perchance we meet on the farther shore.

One winter's day to Ballinderry
I tramped in the rain from Aghalee,
When I heard a voice behind me, "Mary,
Open your arms and come to me."
I opened my arms, how well he knew me,
I opened my arms and took him to me,
For sure but it was Phelimy Hyland
Back from years on a desert island,
Grey with sorrow and salt with sea,
True and faithful and back to me.

And there we blessed the Name together
Twist Ballinderry and Aghalee,
In the lone-end damp, in the wintry weather,
He bared his head and I bowed my knee.
And the word passed round of Phelimy Hyland,
Up and down unto far Rathfriland,
Of him who was saved from the cruel sea,
True and faithful and back to me.

And we sent for the priest to Ballinderry
Because there was none at Aghalee,
And again my heart grows light and merry
And again I visit the, ivy tree.
Set in the waves of wild Lough Neagh,
And again I go to bonnie Ram's Island,
Side by side with Phelimy Hyland,
And Phelimy Junior on my knee.


(This article was originally published in the Lisburn Standard on 12 October 1917 as part of a series which ran in that paper each week through 1917 and into 1918. The text along with other extracts can be found on my website Eddies Extracts.)


Posted by an extract of reflection at Wednesday, October 12, 2011