How much is that in todays money? 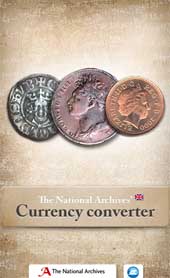 Over the years I have seen many postings in which someone has asked the question "How much would that be today?" in regard to an ancestor for whom they had a source which gave a sum of money for wages, a settlement, something they sold... or stole... etc.

It's a question that has sometimes raised great debate and several websites such as www.measuringworth.com and www.nationalarchives.gov.uk/currency/ have been set up to answer it.

But if you have an iPhone/iPod/iPad you can now get an app for that.

In a press release The National Archives said

Our records are not just the first draft of history, but are increasingly being used in smart ways by developers to create innovative products and services for anyone who needs instant access to practical historical information.

The Old Money application enables users to make sense of historical facts and figures which might otherwise be meaningless, such as the 1761 sale of Buckingham Palace for £21,000 or William Shakespeare's annual salary in 1599 of £100 a year.

Details can be found on the RevelMob website at www.revelmob.com/currency-converter.
Posted by an extract of reflection at Thursday, February 03, 2011