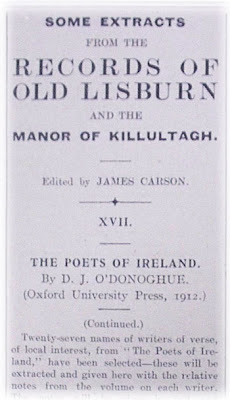 THE POETS OF IRELAND.

Stott, Thomas. -- THE SONGS OF DEARDRA, AND OTHER PIECES, London, 1825. This once well-known writer, who is referred to in Byron's "English Bards and Scotch Reviewers," was born at Hillsborough, Co. Down, on April 25, 1755. He was a rich linen-bleacher in Dromore. A great friend of Dr. Percy, Bishop of Dromore, he was first a violent Republican, it is said, afterwards becoming a strong Conservative. He died on April 22, 1829, at his residence in Dromore, and was buried in the Cathedral grounds. There is a lengthy inscription on his tombstone, which was erected by his son, John Stott who died in Coleraine on May 17, 1860). Thomas Stott wrote numerous poems for the United Irishmen's "Northern Star," "Belfast News-Letter," London "Morning Post," "Poetical Register" (1806, etc.), and other periodicals over the signature of "Hafiz," and his own name. He was the "Thomas Stott" of "Waringstown" and "Banks of Banna," who wrote for Walker's "Hibernian Magazine," 1779-80. In the same magazine for August and November, 1801, are poems by him, two of them signed "Hafiz Dromore." There is a poem of his among Rev. Samuel Burdy's verses, and another is in Madden's "Literary Remains of the United Irishmen," taken from "Paddy's Resource."

Each, country book-club bows the knee to Baal,
And, hurling lawful genius from the throne,
Erects a shrine and idol of its own,
Some leaden calf -- but whom it matters not
From soaring Southey down to grovelling Stott.

As for the smaller fry who swarm in shoals,
From silly Hafiz up to simple Bowles;
Why should we call them from their dark abode,
In broad St Giles's or in Tottenham Road.

Let Stott, Carlisle, Matilda and the rest --
Of Grub Street and of Grosvenor Place the best,
Scrawl on, till death release us from the strain,
Or Common Sense assert her right again.

Byron afterwards wrote -- evidently regretting his harsh and biting words -- "The greater part of this satire I most sincerely wish had never been written -- not only on account of the injustice of much of the critical, and some of the personal part of it, but the tone and temper are such as I cannot approve."

In Dromore Cathedral are two handsome windows recording the children and grandchildren of Thomas Stott. The portion of the transept in which the windows are is known as the "Stott Niche."

The Mount of Dromore formed the subject of a beautiful poem by a youthful poet of Dromore, named Thomas Romney Robinson, who lived at the time Dr. Percy was Bishop of Dromore. When Robinson was in his 49th year a volume of his poems was published.

Of Cunningham, another youthful Dromore poet, who died in 1804. Robinson wrote: --

On the death of William Cunningham, by Master T. Romney Robinson.

Hark! 'midst the gloom of Lagan's winding shores,
Yon mournful knell, loud thrills the startled ear; --
While freed from life, a much lov'd spirit soars,
And claims on earth, the tribute of a tear.

See! dark December tears his robes of snow,
Cold icy dew his hoary locks deforms;
And with the expiring year, departing slow,
Sighs 'midst the whirl-wind of his rushing storms.

In fancys wreath no gem resplendent shines,
Her frantic hand the flow'ry garland rends;
Funereal cypress, round her brow she twines,
And o'er her favourite's tomb in sorrow bends.

In his pure mind the flow'rs of genius sprung,
His artless breast with every virtue shone;
His rural lyre the sylvan dryades strung,
And truth inspired him from her heavenly throne.

But now, no more that vocal lyre shall charm,
Cold is the hands that bade its chords resound;
And cold that heart, so late with friendship warm,
Deep in the bosom of the wintry ground.

New fledged with radiant plumes of heavenly fire,
His soul ascending views its native skies:
Cease, cease my muse, from paths unknown retire,
And from the prospect turn thy dazzled eyes.

In 1808 was published "Poems by W. Cunningham," Dromore, James Parks. From the introduction to the volume the following is taken:--

William Cunningham was born at Maharabeg, in the parish of Dromore, on the 19th of March, 1781; and while he was a poor weaver boy, having received the first rudiments of education at one of the Bishop of Dromore's Sunday schools, had by reading such books as he could borrow made so considerable a progress, that in the autumn of 1800 he presented his Lordship with a copy of verses requesting the loan of books. The Bishop being struck with the marks of genius displayed in this poem (which is unfortunately lost), rescued him from the loom, and placed him at the Diocesan school of Dromore, where his application was so diligent, that in about three years he had read the principal Latin and Greek classicks.

Being thus qualified to superintend the education of youth, which had been the object of his wishes, he was received early in the year 1804 as an assistant teacher in the academy of the Rev. Doctor Bruce of Belfast, where he was distinguished for his diligence and skill in preparing the boys under his care to be examined before the summer vacation in that year. But by this time such strong symptoms of a consumption had appeared in his tall, thin, and slender frame, that he could not any more return to his charge; and his declining health confined him to the house of his poor mother, near the turn pike gate between Hillsborough and Dromore, where he continued to experience the kindness of his former patron, and was most generously attended by Sir George Atkinson, an eminent, physician in the adjoining town of Hillsborough; but his case was beyond the reach of medical aid, and terminated fatally on Thursday, the 27th December; he was interred in Dromore churchyard on the Saturday following, having nearly completed his 24th year.

Specimen of his work --

Long-banish'd peace again descends,
Array'd in all her heav'nly charms,
Her dove-like wings to earth she bends,
Bids Europe drop the deathful arms.

Scarce had the heav'nly goddess spoke,
When France and Britain heard her voice,
The hostile bands of war was broke,
Let all the world around rejoice. --

Armies commission'd to destroy,
Shall ravage Europe's plains no more,
Nor longer they their arms employ,
To drench her fertile fields with gore.

The Rhine shall cease with blood to flow,
Th' affrighted Po shall limpid stray,
Where late encamp'd the warlike foe,
Blithe shepherds and their flocks will play.

Victorious Nelson! war give o'er,
With laurel wreaths and olive crown'd,
How moor thy fleet round Albion's shore,
That long hath aw'd the vast profound.

Commerce displays her canvas wings,
To foreign climes bounds o'er the flood,
Their choicest stores from thence she brings,
Her constant aim -- the public good.

Life-aiding agriculture spreads
Beneath th' industrious peasant's care,
The hostile bands no more he dreads
To mar the labours of the year.

Even science'self will wake a-new,
In ev'ry grace divinely drest.
And ope new prospects to our view,
While love and friendship warm each breast.

The tender mother fondly hears,
The darling son from danger freed,
Whose breast for him  oft heav'd with fears,
Lest war shou'd him to battle lead.

The lovely nymph of blooming charms,
May fearless yield her heart and all --
Since war no more will from her arms,
Her fav'rite swain to battle call.

These and a thousand, gifts are thine,
Sweet peace! -- which war can never know,
Now Europe bows before thy shrine,
From thee her choicest blessings flow.

Thomas Percy, Bishop of Dromore, was the author of several valuable books, and was also a poet of no mean order. His ballad, "O Nancy, wilt thou go with Me?" written to the lady who afterwards became his wife, has real merit and sweetness.

Near the town of Dromore, between the Dublin Road and the River Lagan, is a handsome monument in memory of Bishop Percy bearing an inscription written by Thomas Stott.

"A Ramble through Dromore," "Banbridge Chronicle" Office, 1886, by John F. Mulligan (Linen Hall Library), contains valuable and interesting information regarding the town and neighbourhood of Dromore.

THE LAND WE LIVE IN.

Banish'd from earth those fiends should be,
Their foul deeds ne'er forgiven,
Who aim, with treacherous enmity,
To hurt -- the Land they live in.

A parricide is deem'd the worst
Of culprits under Heaven;
And they are equally accurst,
That wound -- the Land they live in.

No favour ev'n a foreign foe,
When from their country driven,
Should ever to the miscreants show.
That hate -- the Land they live in.

Against oppression all should strive,
(As patriots oft have striven),
But none at wicked schemes connive.
To blast -- the Land they live in.

True loyalty, like yonder oak,
By lightning scathed and riven,
Still sends new suckers from the stroke,
To guard -- the Land we live in.

But black dishonour shall attend
Their name, whose plans contriven
To answer some base sordid end,
Would crush -- the Land we live in.

Our Grattan late -- our Canning now,
Have bright examples given
Of patriotism, truth must avow,
To help -- the Land we live in.

Then let all loyal subjects sing,
From Dingle to Dungiven --
Success attend our noble King,
And bless -- the Land we live in.

Further Extracts from the "Poets of Ireland" next week.


(This article was originally published in the Lisburn Standard on 9 February 1917 as part of a series which ran in that paper each week through 1917. The text along with other extracts can be found on my website Eddies Extracts.)


Posted by an extract of reflection at Wednesday, February 09, 2011