The Afghans are Jews? 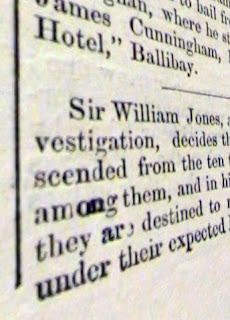 "Our political connexion with the country now ceases. The troops are to be withdrawn, and the Affghans left to choose their own monarch."

While that quote almost sounds as if it was published yesterday it was in fact part of a newspaper report published in 1842,  exactly 168 years ago today, referring to the British retreat from Kabul and their subsequent massacre and the resultant punitive expeditions that brought to an end the First Anglo-Afghan War.

That is not the subject of this post however, but a little one paragraph story tagged on at the bottom of the opposite page...

Sir William Jones, after a deliberate and long investigation, decides that the Affghans are Jews, descended from the ten tribes, and records a prediction among them, and in his time current in the East, that they are destined to re-establish the Jewish empire, under their expected Messiah, at Jerusalem.

A curious statement and given the current situation in that region I had to look this up... isn't the internet wonderful...

The identity of the Sir William Jones alluded to is suspect for although the wording suggests a contemporary report (and it could be he was a relation)  it is possible it actually refers to the 18th century linguist, Indian scholar and founder of the Asiatic Society Sir William Jones (1746–1794) (whose father was a Welsh mathematician noted for devising the use of the symbol pi).

In 1792 Sir William published, with an introduction and notes, a dissertation by Henry Vansittart entitled "On the Descent of the Afghans from the Jews" which begins

The Afghans, according to their own traditions, are the posterity of MELIC TA'LU'T (king SAUL), who, in the opinion of some, was a descendent of JUDAH the son of JACOB, and according to others, of BENJMIN the brother of JOSEPH.

In The Myth of the Ten Lost Tribes, Haim F. Ghiuzeli writes

Various tribes of Afghanistan, especially the Pathans, have received perhaps the largest amount of attention from the seekers of Ten Lost Tribes. The theory was originally advanced by European travelers to the region, but it was later adopted by some Jews. They believe that Afghanistan is probably the most suitable place for a search for the Ten Lost Tribes, and even by some local Muslim inhabitants of Afghanistan. The earliest theory about the Ten Lost Tribes origin of Afghan tribes was lanced already towards the end of the 18th century by Sir William Jones (1746-1794), an early researcher of Indian studies, in an introduction that he wrote to the English translation of the "Secrets of the Afghans" by Henry Vasittart (1732-1770), the British governor of Bengal and one of the first Europeans with an interest in Afghan history and traditions. This theory found a strong supporter in Henry Walter Bellew (1834-1892), an Indian born English surgeon with a distinguished career in the British administration of India. Bellew elaborated extensively about the possible connection between various ethnic groups of Afghanistan and the Ten Lost Tribes and tried to prove his assumptions by suggesting a likeness between biblical and historic place names, Hebrew words and given names and local place names in Afghanistan and some words from the languages and dialects spoken in that country. He also advanced a supposed similarity of customs and habits between the two peoples and, typically for a 19th century researcher, even endeavored to establish a resemblance between the physiognomy of Afghan tribes and that of the "Jewish type". Bellew was succeeded by many travelers and explorers to Afghanistan and the neighboring areas who occasionally suggested new elements that could enhance the belief in a link between the tribes of Afghanistan and the Ten Lost Tribes.

This theory still has many proponents today and an internet search throws up several articles on the subject which are worth reading for those with an interest in Biblical history or that of the region.

The dissertation finishes with this note by Sir William Jones

This account of the Afghans may lead to a very interesting discovery. We learn from ESDRAS, that the Ten Tribes, after a wandering journey, came to a country called Arsareth; where we may suppose they settled: now the Afghans are said by the best Persian historians to be descended from the Jews; they have traditions among themselves of such a descent; and it is even asserted, that their families are distinguished by the names of Jewish tribes, although, since their conversion to the Islam, they studiously conceal their origin. The Pushto language, of which I have seen a dictionary, has a manifest resemblance to the Chaldaik; and a considerable district under their dominion is called Hazareh, or Hazaret, which might easily have been changed into the word used by ESDRAS. I strongly recommend an inquiry into the literature and history of the Afghans.

What do you think the Afghans would say?

Posted by an extract of reflection at Thursday, December 09, 2010

Email ThisBlogThis!Share to TwitterShare to FacebookShare to Pinterest
Labels: history