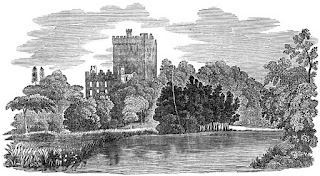 
"The groves of Blarney,
They are so charming."

and the subject of our wood-cut might naturally tempt us to be mirthful and extravagant. But despite of Milliken’s excellent song — we are not in the vein, and feel more disposed to melancholy than gaiety at sight of a noble castle, the seat of one of the most ancient, and most unfortunate princely families of Ireland — the Mac Cartys of Desmond.

The castle of Blarney was founded about the middle of the fifteenth century by Cormac Mac Carty, or Carthy, surnamed Laider, or the strong, descended from the hereditary kings of South-Munster. He was also founder of the beautiful abbey and castle of Kilcrea, the nunnery of Ballyvacadine, and many other religious houses, in the former of which he was buried, and in which his tomb was till within a few years to be seen, bearing the following inscription:—

The castle remained in possession of his descendants till forfeited with the extensive estates belonging to the lord Muskerry and Clancarthy, in the war of 1689, after which it came into the possession of the Jeffrey's family, to whom it still belongs. A pension of three hundred a year was however allowed to this unfortunate nobleman, on condition of his leaving the kingdom. "With this," says Smith, "he retired to Hamburgh on the Elbe, and purchased a little island in the mouth of that river, from the citizens of Altona, which went by his name." He died here October 22, 1734, aged 64, leaving two sons, Robert, a captain in the English navy, commonly called Lord Muskerry, and Justin Mac Carthy, Esq. Lord Muskerry having fallen under suspicions of being attached to the house of Stewart, "which had on a former occasion," remarks Charnock, in his Biographia Navalis, "proved the ruin of his father, was ordered to be struck off the list of naval officers, on the 16th July, 1749. He afterwards entered into foreign services."

The military and historic recollections connected with Blarney are doubtless of sufficient importance to give an interest to the place: but to a curious superstition it is perhaps more indebted for celebrity. A stone in the highest part of the castle wall is pointed out to visitors, which is supposed to give to whoever kisses it the peculiar privilege of deviating from veracity with unblushing countenance whenever it may be convenient — hence the well-known phrase of "Blarney." The grounds attached to the castle, as I before observed, though so little attended to, are still beautiful. Walks, which a few years since were neat and trim, are now so overrun with brambles and wild flowers as to be passed with difficulty. Much wood has also been cut down, and the statues, so ridiculously enumerated in a popular song, removed. A picturesque bridge too, which led to the castle, has been swept away by the wintry floods, and, with the exception of a small dell called the Rock Close, every thing seems changed for the worse. In this romantic spot nature and art (a combination rather uncommon in pleasure grounds) have gone hand in hand. Advantage has been taken of accidental circumstances to form tasteful and characteristic combinations; and it is really a matter of difficulty at first to determine what is primitive, and what the produce of design. The delusion is even heightened by the present total neglect. You come most unexpectedly into this little shaded nook, and stand upon a natural terrace above the river, which glides as calmly as possible beneath. Here, if you feel inclined for contemplation, a rustic couch of rock, all festooned with moss and ivy, is at your service; but if adventurous feelings urge you to explore farther, a discovery is made of an almost concealed, irregularly excavated passage through the solid rock, which is descended by a rude flight of stone steps, called the "Witches' Stairs," and you emerge sul margine d'un rio, over which depend some light and graceful trees. It is indeed a fairy scene, and I know of no place where I could sooner imagine these little elves holding their moon-light revelry.