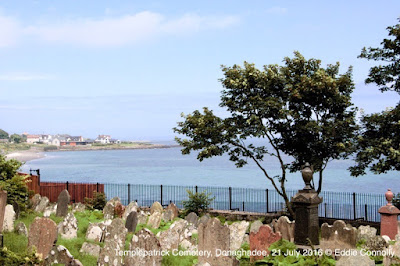 Last year I made a little visit to Templepatrick graveyard which is on the seaward side of the road from Donaghadee to Millisle. Although referred to as Templepatrick it is actually situated in the adjoining townland of Miller Hill.


There appears to be no known history of the site and all traces of a church there have disappeared although a map of the area in Taylor & Skinners Maps of Ireland, 1777, shows church ruins there. There was reputedly a well on the seaward side of the graveyard known as St. Patrick's well and a tradition that St. Patrick once landed here. There is also a small watch-house in the centre of the graveyard.

The graveyard is very overgrown and the graves are tightly packed but most of the headstones are of local slate and are still fairly legible. 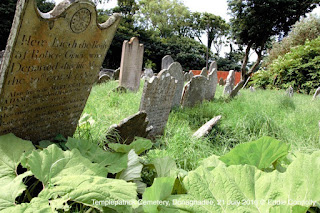 Most of the inscriptions prior to 1800 were transcribed and published in the Journal for the Memorials of the Dead in Ireland, starting in Vol. VIII, page. 518. I have transcribed these and they can be found on my website here. There are 190 inscriptions recorded, the oldest date of death recorded is 1678.

A number of photographs I took can be found on my Facebook page.

Later surveys have been done and one can be found online here.