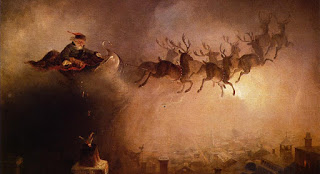 Twas the eve before Christmas; “Good night” had been said,
And Annie and Willie had crept into bed.
There were tears on their pillows and tears in their eyes,
And each little bosom was heaving with sighs.
For to-night their stern father’s command had been given
That they should retire precisely at seven
Instead of eight; for they troubled him more
With questions unheard of than ever before.
He told them he thought this delusion a sin,
No such being as Santa Claus ever had been,
And he hoped after this he should never more hear
How he scrambled down chimneys with presents each year.

And this was the reason that two little heads
So restlessly tossed on their softy downy beds.
Eight, nine, and the clock on the steeple tolled ten;
Not a word had been spoken by either till then,
When Willie’s sad face from the blankets did peep,
And whispered, “Dear Annie, is you fast asleep?”
“Why, no, brother Willie,” a sweet voice replies;
“I’ve tried in vain but can’t shut my eyes
For somehow it makes me sorry because
Dear papa has said there is no Santa Claus!
Now, we know there is, and it can’t be denied,
For he came every year before mamma died;
But, then, I’ve been thinking that she used to pray,
And God would hear, everything mamma would say,
And perhaps she asked Him to send Santa Claus here
With the sack of presents he brought every year.”
“Well, why tan’t we pray dust as mamma did den,
And ask Dod to send him with presents aden?”
“I’ve been thinking so, too,” and without a word more
Four little bare feet bounded out on the floor,
And four little knees the soft carpet pressed.
And two tiny hands were clasped close to each breast.
“Now, Willie, you know we must firmly believe
That the presents we ask for we’re sure to receive,
You must wait just as still, ’till I say the Amen,
And by that you will know that your turn has come then.”
“Dear Jesus, look down on my brother and me,
And grant us the favours we are asking of Thee.
I want a wax dolly, a tea set and ring,
And an ebony work-box that shuts with a spring.
Bless papa, dear Jesus, and cause him to see
That Santa Claus loves us far better than he;
Don’t let him be fretful and angry again
At dear brother Willie and Annie, Amen.”
“Please, Desus, et Santa Thus turn down to-night
And bring us some presents before it is light,
I want he sud dive me a nice little sed
With bright shining ’unners an’ painted all 'ed,
A box full of tandy, a book and a toy,
Amen, and den, Desus, I’ll be a dood boy.”

Their prayers being ended, they raised up their heads,
And with hearts light and cheerful again sought their beds.
They were soon lost in slumber, both peaceful and deep,
And with fairies in Dreamland were roaming in sleep.

Eight, nine, and the little clock had struck ten,
Ere the father had thought of his children again.
He seems now to hear Annie’s half-suppressed sighs
And to see the big tears stand in Willie’s blue eyes.
“I was harsh with my darlings,” he mentally said,
“And should not have sent them so early to bed.
But then I was troubled, my feelings found vent
For bank stock to-day has gone down ten per cent.
But, of course, they’ve forgotten their troubles ere this,
And that I denied them the thrice-asked-for kiss;
But just to make sure I’ll steal up to their door.
For I never spoke harsh to my darlings before.”
So saying he softly ascended the stairs;
And arrived at their door to hear both of their prayers.
His Annie’s “bless papa” draws forth the big tears,
And Willie’s grave promise falls sweet on his ears.
“Strange, strange, I’d forgotten,” said he with a sigh,
“How I longed when a child to have Christmas draw nigh.
I’ll atone for my harshness,” he inwardly said,
“By answering their prayers ere I sleep in my bed.”
Then he turned to the stairs and softly went down,
Threw off velvet slippers and silk dressing gown,
Donned hat, coat, and boots, and was out in the street,
A millionaire, facing the cold driving sleet.
Nor stopped he until he had bought everything
From the box full of candy to the tiny gold ring.
Indeed, he kept adding so much to his store
That the various presents outnumbered a score.
Then homeward he turned with his holiday load,
And with Aunt Mary’s help in the nursery ’twas stored.
Miss Dolly was seated beneath a pine tree
By the side of a table spread out for her tea.
A work box well filled in the centre was laid,
And on it the ring for which Annie had prayed.
A soldier in uniform stood by a sled,
“With bright shining runners and painted all red.”
There were balls, dogs, and horses, books pleasing to see,
And birds of all colours were perched in the tree.
While Santa Claus laughing stood up on the top,
As if getting ready for more presents to drop.
And as the fond father the picture surveyed
He thought for his trouble he had amply, been paid.
And he said to himself, as he brushed off a tear,
“I’m happier to-night than I’ve been for a year.
I’ve enjoyed more true pleasure than ever before.
What care I if bank stock falls ten per cent. more.
Hereafter I’ll make it a rule, I believe,
To have Santa Claus visit us each Christmas Eve.”
So thinking he gently extinguished the light,
And tripped down the stairs to retire for the night.

As soon as the beams of the bright morning sun
Put the darkness to flight, and the stars one by one,
Four little blue eyes out of sleep opened wide,
And at the same moment the presents espied.
Then out of their beds they sprang with a bound,
And the very gifts prayed for were all of them found.
They laughed and they cried in their innocent glee,
And shouted for “Papa” to come quick and see
What presents old Santa Claus brought in the night
(Just the things they wanted), and left before light.
“And now,” added Annie, in a voice soft and low,
“You’ll believe there’s a Santa Claus, pappa, I know.”
While dear little Willie climbed up on his knee,
Determined no secret between them should be.
And told in soft whispers how Annie had said
That their dear blessed mother, so long ago dead,
Used to kneel down and pray by the side of her chair.
And that God up in heaven had answered her prayer.
“Den we dot up and prayed dust well as we tood,
And Dod answered our prayers, now wasn’t He dood?”
“I should say that He was, if He sent you all these,
And knew just what presents my children would please.
(Well, well, let him think so, the dear little elf,
’Twould be cruel to tell him I did it myself.)”

Blind fathers! Who caused your stern heart to relent,
And the hasty words spoken so soon to repent?
’Twas the Being’ Who made you steal softly upstairs,
And made you His agent to answer their prayers.

Posted by an extract of reflection at Saturday, December 24, 2016