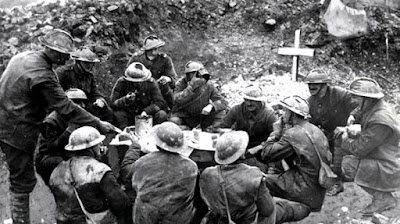 When you’re waitin’ in the trenches.
An’ you haven’t much to do
But to think on all the wonders
That your life is passin’ through,
You will sometimes fall adreamin’
O’ the things your lot denies,
An’ you’ll feel a kind o ’dimness
Always comin’ to your eyes
When you find yourself asingin’ in the trenches.

Oh! the songs we’re ever singin’,
They are just the songs o’ home;
An’ you couldn’t tell the reason
Why the words won’t always come.
It’s like keepin’ back the bullets
To be strivin’ with your tears,
When you hear the songs astealin’
From the joys o’ other years.
It’s a wonder how you hear them in the trenches!

Shure it’s Sandy’s always singin’
O’ his bonnie Highlan’ glens,
And beside you, you’ll be hearin’
All about the English fens.
Now, I wonder how they’d take it
If me voice could steady be
Till I’d sing the song o’ “Mother,”
With its endin’, o’ “Machree,”
But I know I mightn’t try it in the trenches.

You would never be for sayin’
That a soldier isn’t meant
To be mixin’ up his duty
With a bit o’ sentiment.
Shure it couldn’t daunt the valour
That is beatin’ at his heart,
An’ it doesn’t shame his country
If he feels the teardrops start —
When he’s singin’ o’ its glory in the trenches.

Why, it makes you know the value
O’ the things you’re fightin’ for,
An’ you’ll feel an inspiration
That defies the ruth o’ war,
For it’s just the homeland mem’ries
That be callin’ everywhere,
An’ you’ll sing the songs they bring you,
Then be strong to do and dare,
Aye, be proud to die, if need be, in the trenches.

I would mind me Dad asayin’,
While a sigh he tried to hide,
“It’s your country, lad, that takes you,
An’ you’re not without a Guide,
Let the bravery o’ Erin
Prove how true its feelin’s be.”
Now I think I’d hear him tellin’
How I kept his trust in me
Could he hear his lad asingin’ in the trenches.

When they’re sendin’ home dispatches
They are always apt to say
’Twas the great courageous spirit
O’ the men that won the day —
Which I know is right to mention —
But it also would be true
If they’d say that half the winnin’
O’ the victory was due
To the songs we’re always singin’ in the trenches.

Posted by an extract of reflection at Monday, November 07, 2016