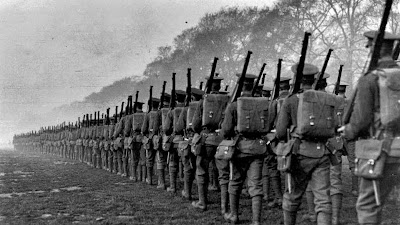 Have you heard the story of “Kitchener's men,”
How he made an army from nothing at all?
Nerved, each as if with the strength of ten.
For the one great cause they came at his call,
And smote, with the veteran's might and ken –
That great new host, the Kitchener men!

Silent and grim he held to his way,
Held the critics' gibes in scorn.
Faced the task of each clamant day,
By the level track or the thicket of thorn;
“ 'Tis a slow siege war,” he said, “but then
You shall win, at the last, with Kitchener's men!”

When the battle broke, that first of July,
On the German front, from the Somme's bright flood –
Through the shrapnel scream and the slogan cry –
They sealed his vow in their red heart's blood.
On, north, o'er the Ancre brook and fen,
Those serried ranks of “Kitchener's men!”

Loud and high was the song of the shell,
As it splintered and crashed through the Mametz Wood;
When a young life reeled in the rush and fell,
Another stepped in where his pal had stood;
O'er trench and crater and “dug-out” den
The waves swept on – of “Kitchener's men.”

Gordons, and Suffolks, and Royal Scots,
Kent and sturdy Northumberland,
Their blood-stained blue forget-me-nots
Have kissed at our heart and thrilled on our hand;
For each, as I said, had the strength of ten,
That dauntless host, the Kitchener men!

Sons of the North, and sons of the South,
Stafford, and Erin's Fusilier,
Londons and Yorks, but all one mouth,
One throat, one heart, with the Britons' cheer;
If you ask of England's “where” and “when,”
Go, read the story of “Kitchener's men!”

Ulster lads, with the song of the Boyne
And the “No Surrender!” of Derry's gate,
With the sinewy arm and the girded loin
And the faith that mocks at Hell and Fate,
O streams of the Strule and the Erne and the Bann,
The stream was red where their young blood ran!

And the signal star shot into the air,
“Come to our help!” – but they never came;
So they fought to the last, and died, at Serre,
Those Lancashire lads! Oh, they played the game!
What else could they do, just there and then,
Than fight and die? – They were “Kitchener's men!”

Where was Kitchener? Who can tell
Of the vigil-post whence he gazed, from far,
As his young troops marched, and dared, and fell
In the hottest front of the world-wide war?
His spirit, I think, was proud just then
'Mid the splendour of God and the glad “Amen!”

Where does he rest 'neath the restless tide? –
By the black-ribbed rocks or the white-ridged sand?
His Ocean-tomb is great and wide
As his field of battle was wide on land.
His work was done! And he died just then
When the bugle called for “Kitchener's men!”

Posted by an extract of reflection at Thursday, September 22, 2016