The Sons of Ulster 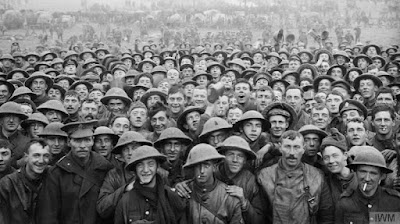 No dream of glory lured them forth
From the fair land they loved so well;
No martial ardour fired their hearts
And held them by its subtle spell.
Theirs were the arts of peace, content
To labour for earth's betterment.

But when the hour of danger struck
They heard their, country's call, and laid
Aside the tasks of every day –
The scholar's gown, the gear of trade.
Heedless of self, they took their stand
For God, for right, for Motherland.

True sons of an Imperial race,
Proud of their glorious heritage,
Strong with the strength that freedom gives
To those who honour's conflicts wage,
They feared no foe save treacherous ease
When duty beckoned o'er the seas.

Dauntless they faced the risks of war,
And quelled not when the order came
To charge across the fatal field
Through the grim battle's furnace flame.
Heroes they fought and heroes fell,
Unconquered and unconquerable!

Oh, Ulster homes where sorrow dwells,
A guest that will not be denied,
Admit another inmate, too,
For on the threshold standeth pride.
Mourn, but be proud, and at grief's shrine
Let laurels with your cypress twine.

Sentinel hills by Belfast town,
Watch for the dawn of victory's day,
And for the ships that homeward bring
Conquerors returning from the fray!
Ulster shall greet with glad acclaim
Sons who have won her deathless fame.

And what of those who come no more?
Under the kindly soil of France
Sleep their bodies by battle worn,
But they have made the great advance,
Crossing death's frontier, out of strife
Into the realm of endless life.