"What silly notions crowd the clouded mind,
"That is through want of education blind." 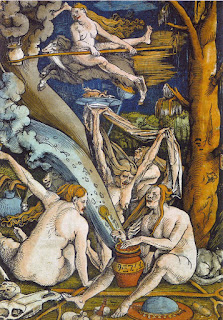 I SHALL not attempt, in the present essay, to trace the origin of witchcraft, from a belief that it is more than probable its antiquity would frustrate all inquiry. It therefore is only necessary to observe, that it was doubtless early formed among other superstitions, and since has been always more or less believed, as the people were well or ill informed. By numerous unquestionable authorities, it appears, that persons who possessed considerable learning were formerly believed to be magicians;1 and hence it seems reasonable to suppose arose druids, conjurors, sooth-sayers, magi, and many others of the same family.

Anciently we find the scotch calling such persons weirds; and the Danes, and other northerns, naming all males that were supposed to possess this occult art, wizards; the females, wicces, or witches, that is, wise women. At the same time we find the priesthood sanctioning such belief's, which they appear to have converted into a powerful engine to answer their turn, as those who dissented or disbelieved any of the church canons, were immediately accused of being wizards, or witches, and generally suffered as such.

In 1484, these opinions appear to have become very general; and the same year they received not a little confirmation from a bull issued by Pope Innocent the VIII. to the inquisitors of Almain, empowering them to proceed against such as had dealings with devils. The substance of the bull is as follows — "Pervenit ad auditum nostrum, &c." "It is come to our ears, that great numbers of both sexes, are not afraid to abuse their own bodies with devils. And with their enchantments, charms, and sorceries, to vex and afflict man and beast, with inward and outward pains and tortures; they destroy the human offspring, and the increase of cattle; they blast the corn of the ground, the grapes of the vines, the fruit of the trees, and the grass and herbs of the fields, &c. Therefore with the authority apostolic, we give power to the inquisitors, &c. to convict, imprison, and punish, &c."

For several years after the issuing of this bull, witches, and their executions, considerably increased; and about this time, a Jesuit, called Debrio, wrote a book, in which many reasons were given why Protestants were so much in the power of the devil; adding, that witchcraft goes along with heresy, as madness with a fever! This plainly shows to what good account the clergy had turned this superstition.

Until the reign of Henry VIII., we hear little of witchcraft in England; but in 1541, Lord Hungerford consulting some reputed witches, to know how long Henry VIII. would live, was discovered and beheaded for it; soon after, two acts were passed against witchcraft and sorcery. In 1562, in the reign of Queen Elizabeth, the Countess of Lenox, and four others, were condemned, because they had consulted wizards how long the Queen would live; the same year a new statute was enacted against witchcraft. So much did the belief of witches prevail at this time, that the learned Bishop Jewel, in a sermon which he preached before Queen Elizabeth, prays "that the laws against witches and sorcerers be put in execution, as they were grown so numerous." 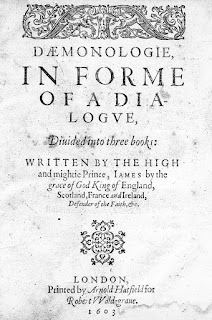 In the following reign, these opinions increased much; James even wrote a work on this subject called Deamonologie, first published in Edinburgh, and afterwards in London. Reading this book, and approving its doctrine, is said to have been a sure way to gain his favour. It was asserted in this book that swimming was a fair trial for a witch; alleging as a reason, that as such persons had renounced their baptism by water, that the water refused to receive them! The parliament seems to have instantly caught the infection, as in the first year of his reign the act of Queen Elizabeth against witchcraft, was repealed, as too mild, and one more strict passed, entitled, "An act against conjuration, witchcraft, and dealing with evil and wicked spirits;" which act established those opinions so fully, that it is said to have become unfashionable to doubt them!

This general infatuation soon became such, that in some villages ia Britain, the witches were said to have been fully as numerous as the other persons; for as a late author has justly observed, "prodigies are always seen in proportion as they are expected." It was during this reign that the present translation of the bible appeared; from which circumstance it is asserted, and with some likelihood, that several phrases were adopted, that favour the vulgar notions of witchcraft, much more than the old translations.

It is worthy of remark that France, Sweden, and most European countries, were under the same strange infatuation about this time.

About this period we read of persons who perambulated the country, to discover witches, called witch-finders, one of whom, Matthew Hopkins, witch-finder-general, of the County Essex, in 1614, caused sixty reputed witches to be hanged, for which he received twenty shillings a head! The persons who were accused of being wizards, or witches, had commonly to go through a water ordeal; first having their thumbs and toes tied across one another, after which they were thrown into a deep river or pool; if they sunk and were drowned, they were considered to have been innocent: but if they swam or sprawled out, as was sometimes the case, it was looked on as a sufficient proof of their guilt, and they usually suffered accordingly. In 1647, the said Hopkins published a book on the subject of witchcraft, in which he mentions twelve signs by which witches are to be known.2

To such an alarming degree did this witch-finding system increase, that it is computed between two and three thousand persons suffered death for witchcraft, in England and Scotland, between the years 1640, and 1661. Several of the persons who suffered, confessed they were wizards, or witches; this, however, is not strange, when we consider the barbarous usage they received, after being accused; for if not thrown into a pool, they were neither suffered to eat, drink, nor sleep, but walked constantly between two persons, who never permitted their devoted victims to sit down, until they confessed, which they generally did, either from being delirious, or weary of their lives. In either case, they were usually questioned about causing the death of some person or persons, who had died lately, under what was deemed suspicious circumstances; and some have been known to confess they had killed people, who were then alive and well; yet, strange to tell, none of these blunders appear to have operated the least in their favour, though such incongruous expressions was an undoubted proof of their insanity.

Scotland was perhaps the last country in which such scenes were legally acted. In East Lothian, in Scotland, there is an eminence called "Spott Law;" in the parish register of which place, is the following memorandum:— "October, 1705, many witches burnt on the top of Spott Law."

As mankind became informed, the belief of witches, and witchcraft vanished; and at length the legislature, on the 24th March, 1736, gave the finishing blow, by repeating those acts against witchcraft, which had so long disgraced our statute books; since which period a gradual decrease has been observable. At present we scarcely hear any thing of this mystic art — except now and then some old woman losing the milk, or butter of her cow.

[1] Pythagoras, an eminent philosopher, who flourished A.M. 3420, was accused of magic; and in A.D. 1254; the learned Roger Bacon was twice cited to Rome for crimes in this way, and acquitted himself both times, with much applause for his learning. So late as 1489, George Ripley, and William Blackney, two distinguished mathematicians, were believed to be necromancers. Within these forty years, a decent old woman was accused of being a witch, because she had more butter on her cow's milk, than some of her neighbours.

[2] Hopkins carried on this horrid trade for many years, till some gentlemen, shocked at his barbarities, caught him, and tied his thumbs and toes together, as he had done many others, and in this state threw him into the water, where he swam. It does not appear, by the accounts that have reached us, that he suffered death from this circumstance; but it had one good effect, it cleared the country of him, and ruined his business.

Posted by an extract of reflection at Wednesday, May 11, 2016