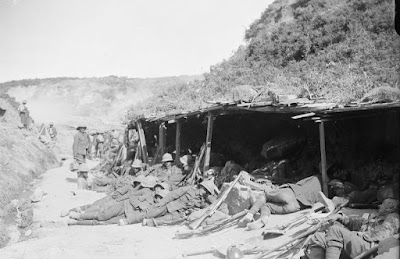 A plague of flies, tormenting still,
Torturing heat and choking dust,
Bombs that paralyse and kill,
And valour that fight and conquer must.

Soldiers with heat of ardour keen,
Spirit as light as the breeze that blows,
Laughter at hideous perils seen,
And perils that never themselves disclose.

Such is life on Gallipoli —
Hand-grenades fly about like balls;
This is what Britain's sons can be
When their noble, widespread Empire calls!

Oh, the thirst! the appalling thirst
That tortures an army in such a state,
Fighting with violence accursed —
The Turk and his diabolic hate!

The Turk with his neck in Germany's hand,
Used by Germany's hellish will,
Taking his last and fatal stand
Man's liberties to strangle and kill.

But all in vain their alliance wars
In triple strength, like three frogs vile;
For against them fight God's hosts of stars
And all His angels, unseen the while.

Hearts of oak and steel and fire!
Thoughts of home and dear ones there!
Every heart has one desire
To win the victory clean and square.

So does the fearful war go on,
Not a thought but of triumph soon
Or late; but a fight that must be won,
Summer or winter, night or noon.

Ye that sleep on Gallipoli,
There on those awful, shattered crags,
Britain's glorious sons are ye,
While round the world float her breeze-blown flags.

Posted by an extract of reflection at Thursday, November 12, 2015