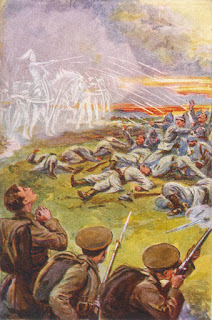 We have all read and heard a good deal about the reported appearance of angels on the battlefields of France, particularly at the time when our soldiers were in sore peril of disaster at the beginning of the war. Some have given their testimony with the utmost conviction that they saw a supernatural manifestation of angels, and were comforted and strengthened by it. Long discussions in the newspapers have followed, in which, as we might expect, some express their faith in the appearance of these angel visitors; others, again, are sceptical and unbelieving altogether; while others offer explanations of one kind and another as to what occurred. The favourite explanations are that those who saw the angels were the victims of excited imagination or suffering from nervous shock, when intense feelings have a way of visualising what exists only in imagination. We are not in a position to take one side or another in this argument, as we do not know enough; but we can very properly consider what the Bible teaches on the subject of angels and their ministry in general. It is a subject about which the Bible says a great deal, and we are in the habit of passing it by altogether. Now, the Bible takes angels for granted. It does not start to prove their existence. It assumes that they are, just as it assumes that God is. God was not alone before man was created. He was surrounded by spiritual beings who dwelt in His presence and came forth from His presence on the high errands of His service. They came to Abraham as he sat in the tent door in the heat of the day. They drew Lot out of Sodom before the city was destroyed. An angel appeared to Jacob, to Joshua, to Elijah. An angel announced the Birth of our Lord. Angels were present at His Resurrection. An angel strengthened Him in His temptation in the wilderness and in His agony in Gethsemane. Christ often referred to the angels in His teaching -- both good and bad angels. He declared to Pilate that legions of angels would come to save Him from the Cross if He asked for them. He spoke about sending forth His angels to gather in His elect. He warned the wicked that their place after judgment would be with the devil and his angels. The Apostle Paul often speaks of the angels, some of then friends help, some of them foes to hinder. He reckons them as standing in ranks of honour and power like the persons who surround a king. The Book of Revelation deals with the angels in many aspects of their service of God and of man. The writer of the Epistle to the Hebrews makes his first comparison between Christ and the angels, and asserts the infinite superiority of Christ over them all. He is a Son; they are servants, to do His bidding.

As we believe in a Supreme Being from whom all things are, and as we believe in the existence of souls after death, so we need have no difficulty in believing in the existence of these angelic beings, who are part, of the supernatural order. Our religion requires us to assume their existence. There is nothing unreasonable in the assumption. They are creatures, as we are creatures. God made them as He made us. We are spiritual creatures with a material body. They are spiritual creatures with a spiritual body, such a body as, perhaps, we may expect to have in the life of glory. They are under the control of God as we all are. The good angels serve God with freedom and love as all good people ought to do. They find their blessedness in His presence and will as the saints above do. The evil angels are His enemies and oppose His plans and work. They tempt us to take their side against the holy, loving God who made them and us. But we are not concerned here with what the Bible teaches us about the evil angels, whose existence is taken, for granted as much as that of the good angels. We are concerned entirely with what the Scripture teaches us about the good angels. What are their labours? What do they do? What services do they render to us in the life we live here on the earth? What is their function in the redemptive ministry of grace and salvation? They worship God as we all ought to do. They acknowledge His majesty and supremacy. Take the sixth chapter of Isaiah — "And one cried unto another, and said, Holy, holy, holy is the Lord of Hosts; the whole earth is full of His glory." Along with the eternal God they worship His eternal Son, the Saviour of the world. Take the fifth chapter of Revelation — "And I beheld, and I heard the voice of many angels round about the throne and the beasts and the elders and the number of them was ten thousand times ten thousand, and thousands of thousands; Saying with a loud voice, Worthy is the Lamb that was slain to receive power, and riches, and wisdom, and strength, and honour, and glory, and blessing. And every creature which is in heaven, and on the earth, and under the earth, and such as are in the sea, and all that are in them, heard I saying, Blessing, and honour, and glory, and power be unto him that sitteth upon the throne, and unto the Lamb for ever and ever." The choir, which leads us in the worship of God, is a choir of angels. May our hearts follow in their song! May our lives be touched with their purity and devotion. It is a doctrine of Scripture that Christ will come again. He once came in lowliness and weakness, to serve, to suffer, to die. He will come again in His own time with power, to perfect His kingdom, to judge the living and the dead, to gather His redeemed to Himself. Angels will attend His coming. It is His own word. "The Son of Man shall come in the glory of His Father with His angels" (Matt. xvi. 27). "When the Son of Man shall come in His glory, and all the holy angels with Him, then shall he sit upon the throne of His glory; and before Him shall be gathered all nations, and He shall separate them one from another, as a shepherd divideth his sheep from the goats" (Matt. xxv. 31). The Bible leads us to suppose that the great dispensation of the Messianic kingdom will also be a great dispensation of angelic ministry. 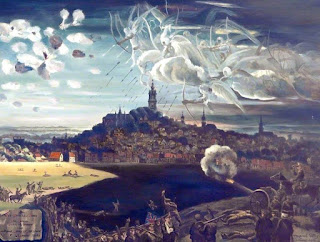 But to come to the services which the angels render to the servants of God, an angel confirmed the faith of Abraham; an angel saved Hagar and her son from death; an angel came and proclaimed himself captain of the Lord's host to lead Joshua and the Israelites into the possession of Canaan. May the Captain of the Lord's host lead our armies to-day! An angel gave Elijah bread and water in his faintness and comforted him. One Psalmist sings, "The angel of the Lord encampeth round about them that fear Him and delivereth them." Another sings of the assurance of Divine protection, "He shall give His angels charge over thee to keep thee in all thy ways." The infant Saviour was under their special care, and Christ teaches that all children are the care of the angels. "In heaven their angels do always behold the face of My Father." An angel delivered Peter from prison. An angel led Philip on his way to preach. The writer of the Epistle to the Hebrews sums up their function in the Christian economy in this surprising way, "Are they not all ministering spirit sent forth to minister for them who shall be heirs of salvation?" We are not in a position to judge as to the angels of Mons. We should not, however, take up an attitude of unbelief in these matters. If we read our Bibles with faith, we must give room for angelic ministry. The ministry of angels takes a surprising form sometimes. Why not? Where the need was great, as it was in the case of our Army at Mons, we feel justified in believing that God revealed His power and protection in special ways to His servants. If some of the soldiers tell us with conviction that they saw a vision of angels, we need not doubt their word. Others may tell us they saw nothing. That is also quite true, for it is only some with refined spiritual touch who see such visions. As Hamlet says — "There are more things in heaven and earth, Horatio, Than are dreamt of in your philosophy."

May the angels of the Lord encamp around our men!


Editorial from The Witness, 17th September 1915 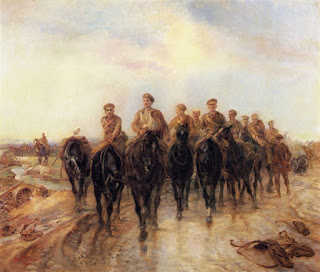 "I have read," says a distinguished lieutenant-colonel in a letter to Mr. Arthur Machen, author of "The Bowmen," "the admirably-written legends with great interest, and I propose to tell you my experience during the retirement." The officer then tells of the retirement from Le Cateau on August 26, 1914. "The brigade to which we belonged covered the retirement of the rest of the division, so that we had very hard work, and by the night of the 27th we were all absolutely worn out with fatigue, both bodily and mental fatigue. No doubt we also suffered to a certain extent from shock, but I feel sure that our mental faculties were still quite sound and in good working condition.

"On the 27th, as we rode along, I became conscious of the fact that in the fields on both sides of the road along which we were marching, I could see a very large body of horsemen. I did not say a word about it at first, but I watched them for about twenty minutes. At last an officer asked me if I saw anything in the fields. I then told him what I had seen. A third officer then confessed that he, too, had been watching those horsemen for the past twenty minutes. So convinced were we that they were really cavalry that at the next halt one of the officers took a party of men out to reconnoitre and found no one there. The night then grew darker, and we saw no more. The same phenomenon was seen by many men in our column."

Images: Bowmen of Mons by Alfred Pearce (top); The Angels of Mons by Marcel Gillis (middle) and The Retreat from Mons by Elizabeth Thompson (bottom).


Posted by an extract of reflection at Thursday, September 17, 2015

Email ThisBlogThis!Share to TwitterShare to FacebookShare to Pinterest
Labels: Angels of Mons, ww1