How the Vodka Came – A Russian Legend 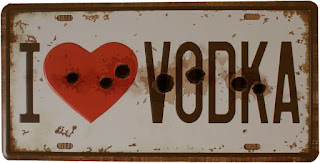 I wonder if you have heard the story they tell in Russia to the little children of the Czar of how the vodka came. Now that it is gone, a great and terrible curse gone from the lives of the great Russian people, the legend comes back to the peasants, and while the men are away at the war the mothers tell the children over again the story of the Imp and the Crust.

It is the tale of an honest Russian peasant working hard in the fields. He was ploughing, and after a time he felt tired and hungry, and ready for a rest.

"How glad I am," he said to himself, "that I have brought a large crust of bread with me. Now I will sit and eat it, and the horse can wander round and graze."

He went to take the crust from his coat, when he found, to his great surprise, that it was gone.

"Whatever shall I do?" he cried. "It really has disappeared. Never mind, I shall manage somehow without it. Perhaps the person who took it needed it more than I do. May it do him good." Now, when he said this the person who had taken it felt very disappointed; for he was hiding near, and hoping the peasant would swear angrily when he found the bread gone.

What sort of a person could that be? No one nice surely. No, indeed, he was not nice, for he was an imp — a little devilkin! And he was so unhappy because no bitter feelings were roused in the peasant that he rushed away to tell the Master-Devil all about it, and the Master-Devil thoroughly scolded him.

"You are not doing your work well!" cried the master. "You are a very stupid little imp, and I am going to have you punished. You must make all the peasants swear and be wicked. You have only been wasting your time."

Then he ordered the Imp to be beaten, and he was thrashed and thrashed until he had called he had thought of a way to make the peasants bad, instead of good.

"Then do it well!" cried has master. "I will give you three years to finish your work."

Away scampered the Imp back to the earth, as fast as he could go, to begin his dreadful task.

Losing no time, he turned himself into a labourer, and was hired as a servant to the honest peasant.

That year he begged his master to sow the corn in the marshy ground, and his advice was taken.

It turned out to be wonderfully clever advice, for the year was unusually dry. Hardly, any rain fell, and the poor peasant was the only one to harvest a good crop, and he had more than he could use in a whole year.

The next spring the labourer begged his master to sow his corn on the hill instead of in the marsh, and again, the peasant took his advice.

Again it turned out to be the very best i thing he could have done, for it was a whole season of rain, and all the other fields of grain were beaten down and rotten. But grain in the field on the hill grew and ripened, and when harvest came the peasant had more corn than he could use.

He was generous and gave much of the corn away to a poor man who had none. This made the Imp very angry, and be began trying harder than ever to do his evil work.

He persuaded his master to let him take some of the corn, which he said he could make into a very delicious drink. At first the simple peasant could not believe that it would be nice, and was afraid of wasting his grain; but the labourer had so often given him good advice that he had not much fear, and gave way. Then the wicked Imp made spirits out of the corn.

"Drink, master, drink!" he cried; and the peasant drank and was very soon quite stupid and tipsy.

The wife was called in, and after drinking the spirit she, too, became like her husband. Alas! all too soon they grew to love the evil drink, and made more and more, sharing it with their friends, so that everyone came to crave for it.

Now, the Imp was delighted with his work, for he saw that all that was good and nice was being killed in the peasant and his friends, and he hurried away to fetch the Master-Devil, so that he could show him what he had done. When they came back there was a party in the peasant's house.

"See," whispered the Imp. "That is the man who did not grudge his last crust. Watch him now!” And they hid where they could see all that was happening.

"Give my friends more drink, wife!" called out the peasant; and his wife took up the glasses to fill them.

At that moment the Imp caused her to trip, and she spilled the spirit on the floor.

Then her husband was dreadfully angry. He raged and swore, and behaved in a cruel way.

"See! See!" said the delighted Imp to his wicked master. "See! That is the man who once parted willingly with his last crust of bread!"

While the peasant and his friends were drinking and laughing, a poor, tired worker came in and sat down. He was thirsty, and looked longingly at the drink; but none was given him, for the peasant only stared unkindly, and said: "Do you think I am going to find drink for everyone?"

This pleased the Imp and his master very much, but the Imp whispered:

"Wait! Wait and see what will happen soon. You will be happier still. Only wait till they have had more and more to drink!"

Then the peasants grew wilder and rougher, and at last instead of only making foolish speeches, they began to quarrel and fight. Soon the little cottage was filled with horrible sounds, and the peasants behaved more like beasts than human beings. They were wild with drink, and unable to control themselves.

Such a pitiful scene it was that it is too sad to dwell on it. But the Master-Devil and the Imp were in high spirits.

"You have done well, very well," said the elder, "and I am more than satisfied with you. If the peasant only goes on drinking he will always be a beast."

And that is all. It would be very nice if there had been a happy ending to the legend, but the happy ending did not come.

But a really happy ending is now at last beginning, for the Czar has kicked the vodka out of Russia, and all the people are glad.


Posted by an extract of reflection at Thursday, August 27, 2015