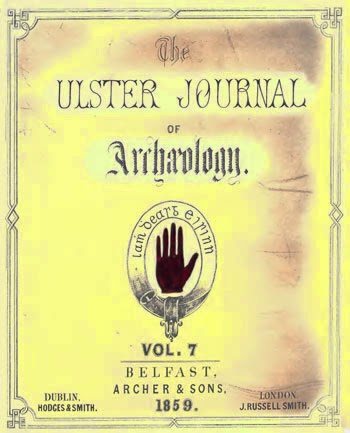 The following legend was communicated by a farmer, far advanced in years, who resides at the foot of Lurgeadon -- or Lurig, as it is usually called -- a curiously shaped hill in the immediate vicinity of Cushendall, which is said to bear a marked resemblance to the Table Mountain of the Cape of Good Hope. The farmer, like other dwellers in the Glens, was a true believer in Fairy annals.

"There's two races of people in this country, and always has been from the earliest time, one invisible and the other visible, like ourselves, and how long we are to have the dominion nobody can tell; them that lost it had great power at one time, and has it still in their present dominions underground. Some will have it that the other race took the air when we got the upper hand -- but God knows best.

"The prince got safe back to Spain, but the king was no ways glad to see him when he heard what had happened. 'Why didn't you come to a capitulation with the Gineral of the array you fought with,' says the king, 'and not lave the country the same as you found it.' 'I fought my best as long as I could,' says the prince, 'but could do nothin' again' enchantment.' This didn't pacify the king, so he sent for his Gran' Counsellor, to consult with him about puttin' the prince in prison, and sendin' a plinipotintiary to the enchanted island. The Gran' Counseller gov his advice that the king should give the young prince another chance, as the luck hadn't left him for good an' all on the one trial; so the king consinted to fit him out once more with five ships and five years' provisions, and as many more han's as he had the first time.

"The prince sailed away, in great heart, westward once more, and again a storm overtook him and wrecked two of his ships, on the north coast of this kingdom, but the other ships stood it out, and anchored once more in the ould place: and at the same hour of the night the prince saw the land appearing, and made for it with men and boats with all speed, and took possession. Once more down cum the army upon them, and the fightin' commenced. The prince left the field for a short time to get breath, when up cum an aged ould man, and says to him, 'what reward will you bestow on me if I put you in the way of vanquishin' your inemies?' 'Spain's at no short for gold,' says the prince, 'and I'll give you what you ask.' 'Very good,' says the ancient man, 'now mind my directions, take these slips of rowan-tree, give your men every one a bundle of them, and when-iver an inemy falls on the ground, pin him down with one of the slips, and he'll never rise.' The prince and his men followed the advice, and in a short time the inemy was fast pinned to the earth, the battle won entirely, and the enchantment broke. The land has never been invisible since, and the enchanted race, with them that ruled them, has disappeared, as we all know, to habitations of their own, and they bear us no malice worth mentioning, if we don't meddle with them, or what belongs till them."


Supplementary to the notices in vol. vi. of the Journal respecting Fairy superstitions in the county of Antrim, I would notice some singular extensions of the prevalent ideas on the subject which exist in a part of that county not far distant from Cushendall. A well-known feature connected with this superstition is, that old thorn-bushes on the banks of streams, or near what the people call "Danes' forts," or, indeed, any place where standing alone, are considered to be the haunts or peculiar abodes of fairies; and, as such, are not to be disturbed without the risk of personal danger, sooner or later, to the person so offending. I have often endeavoured to explain, on rational principles, to persons putting faith in this belief, how it was that a thorn-bush might be growing alone -- that they were perhaps wrong in their opinion that it had never been planted by human hands -- that there was at least no proof of the fact -- or if so, it was possible that the birds of the air, or the little boys of a far distant age, might have carried away haws to those remote places, some one of which, out of a multitude, might have fallen on good ground, and escaped the thousand dangers to which young thorns, as well as other growing scions, are exposed in their progress from youth to maturity. My attempted explanations were always received with incredulity: and in truth, a solitary old gnarled thorn that has braved the storms of two or three centuries, standing on the bank of one of those beautiful streams with which this country abounds, distant from any human habitation or from any of its kind, is, to say the least of it, an object of some interest; and we can scarcely wonder that it should produce an impression on weak and credulous minds not easily removed. And this brings me to what I have called an extension of the superstition, though it might rather be considered a degradation of it, being destitute of any romantic associations whatever. Passing through a meadow lately with the occupier, I asked him why he did not remove a number of what are called "wild sallies," [willows,] perfect weeds, in fact, which were fast spreading over his ground, forming a most unseemly and unprofitable thicket. He said it was considered best  not to touch thorn, as they never had been planted by the hand of man. In the next field nearly, there is an ash-tree standing alone at the edge of a stream, and also thought to be of supernatural origin. The consequence is, that it is tended with the utmost reverence by the small farmer in whose land it is growing: it is even thought unsafe to cut a rod from it, stories being told of calamities befalling persons who had been so daring as to commit such an act; the grass around it is carefully shorn, and when brought home, a strict examination of it is made, to discover if any twig has been cut in the process and carried away unwittingly from the sacred plant; and in cases where this has happened, I have known the twig taken back again, and laid with due respect and caution beside the parent stem.

These instances are brought forward to show that this superstitious belief is not confined to old thorns only, but would probably be found, at least in some localities, to extend itself to a tree of any kind, growing alone, or of which the origin did not readily appear.


The above articles are reproduced from the Ulster Journal of Archaeology, vol. 7, 1859.


Posted by an extract of reflection at Thursday, November 06, 2014