The French Settlers In Ireland - No. 9 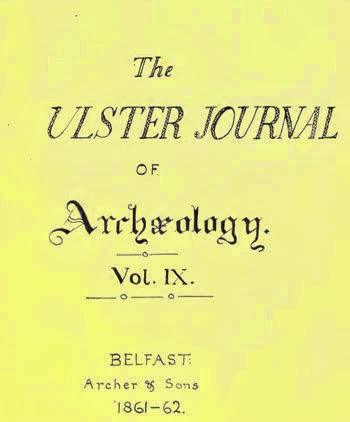 Few of the present inhabitants of Belfast are aware that there are still amongst them the descendants of French refugees, who settled here, as in other parts of Ireland, in consequence of religious persecutions. The town, which was afterwards to become the prosperous capital of Ulster, exhibited a very different appearance at the time of their arrival from its present one. Thick woods encompassed it on every side; the extensive garden and orchard of the Castle are described, by an English tourist of the time, as reaching down to the Lagan, which was then a wide river; while the Castle itself (of which we know nothing but the site) is mentioned as "a dainty and stately palace, the beauty and glory of the town." A narrow stream flowed down the principal thoroughfare (now High Street), planted at each side with trees, and crossed at intervals by several bridges. The town was regularly fortified and surrounded by a deep fosse. No busy sound of manufacturing industry filled the air; nor was there seen the crowded traffic of populous thoroughfares, nor the shipping of a flourishing port. No factories with their tall chimneys poured forth volumes of smoke into the atmosphere, nor polluted the pure stream with their refuse. Indeed there was nothing to indicate that, after the lapse of two centuries, this third or fourth rate town would reach its present size and eminence. Nevertheless, Belfast had even then mercantile importance sufficient to attract the attention of strangers, and, amongst others, a number of French emigrants were induced to settle here. These may be described as the pioneers of the refugees who afterwards became citizens of the place. One of these bore the well-known name of Le Byrtt,a descended from the brave ancestor who obtained great renown in the French wars of Henry V. of England, by slaying in single combat, the celebrated warrior, De Penicè, and contributing greatly by his gallant conduct to the defeat of the enemy; and who, as the old chronicle says, "so did the King great service" that he was allowed to adopt the coat of arms of his opponent along with his own, and the motto "Loyal au Mort." Another of the early settlers was the descendant of the private secretary of Mary Queen of Scots, and whose heroic sister, Mary Curl, remained with her royal mistress during all her trials, and was her attendant even when she suffered on the scaffold; her conduct and demeanour being in perfect accordance with the motto of her family, "Un Dicu, un Roi, une Foi."b

It may be also mentioned, in connection with the refugees, that Belfast afforded the last resting-place for the remains of the Chevalier De Champagné, a French officer in King William's army, and for those of a Balquière. One of the honoured founders of our Belfast Charitable Society was a Gillan: and there also settled here a Gaussen of the same family that gave to Saumur a professor, and in after times to Geneva another theological teacher of high repute.c It was here, likewise, that De Lolme sought employment at one period of his eventful career. The parish church received as its vicar James Saurin,d nephew of the most celebrated preacher of his day. Here is the grave of a descendant of the noble Chartrese family: his brave ancestor came over to this country with King William III., in whose service he held the rank of colonel. Here too lived and died a descendant of Kins Henry the 4th of France.f Near Belfast resided a lineal descendant of the Count of Thoulouse, whose ancestor escaped from France before the "Massacre of St. Bartholomew," but who assumed the name of Dolling, from a village on his brother's property.g The Belfast Academy at one time had, as its English Master, the son of a Huguenot settler, named Goyer, who was an excellent teacher of the language. A distinguished surgeon of Belfast, named Forcade, who died about twenty-five years ago, was the son of a Huguenot merchant; and the descendants of a French clergyman, named Sueter, are known to have lived in this town.

These few names of French settlers are the only ones we have been able to trace with certainty; and we have descendants of all of them among us still. Other French names are met with in the Belfast parish registers of the period, viz.:--


But, besides the descendants of Huguenots, many other inhabitants of Belfast are of French or Norman extraction. Some of these came over from Scotland or England at a very early period, while others immigrated much more recently. Subjoined are some of the names of the former class.

Of the more recent class may be mentioned Bourdot, the well-known name of a hair-dresser in Belfast forty years ago. His father landed in Ireland with General Thurot, at his unsuccessful attack on Carrickfergus; and, with a number of other men who were taken prisoners, preferred remaining here to returning home after their release. We trace to a French origin the family of Pottinger, recently distinguished by the eminent services, in the East, of the late Sir Henry Pottinger, as well of his brother Eldred. Another brother, Colonel W. Pottinger, still survives. Thomas Pottinger was the first "Sovereign" of Belfast; and his son Thomas was High Sheriff of the County Antrim at the time of King William's arrival, and is recorded to have raised the county in his favour, to have sold his own plate, and to have induced others to do the same, in order to aid the army of that monarch. The brother of the High-Sheriff, Captain Edward Pottinger, conveyed King William to Carrickfergus in his frigate, the Dartmouth. It was the same intrepid captain, in his vessel of 280 tons, and accompanied by another ship of war, who convoyed the merchantmen who broke the boom at the Siege of Derry. This gallant man and his vessel were shortly after lost by shipwreck off the Isle of Mull, while on the look-out for some French vessels which were expected with supplies for King James's army. From these ancestors the present Pottinger family is descended. The name is still preserved as the appellation of two localities in Belfast and the vicinity, "Pottinger's Entry" in High Street, and "Mount Pottinger" in the suburb of Ballymacarrett.


[a] Le Byrtt. -- The last descendant of this family, which formerly gave, more than once, a chief magistrate to the town, was the late Surgeon W. Byrt, who died in Belfast, after an honourable career as military surgeon. This estimable citizen was a large contributor, by will, to the endowment of Christ's Church, where a monument to his memory exists.

[b] The present John Currell, Esq., of Belfast, is the descendant of Queen Mary's Secretary.

[c] Gaussen. -- The present family of Gaussen resident in the County of Derry, some collateral branches of which also reside in Belfast, trace their descent from this source. Pierre Gaussen, nephew of one of the brothers who came to England, became a Governor of the Bank of England, and a Director of the Hon. East India Company. His high position did not alter the benevolence of his character, as he became one of the directors of the Hospital of Refugees in 1779, and consented to act as its treasurer. The same kindly disposition is perpetuated among the descendants of the brother who settled in Belfast.

[d] For an account of the family of Saurin, see the paper on the Lisburn Huguenot Settlement, in this Journal.
In connexion with the settlement of certain of the Huguenot refugees as religious teachers among the people of this kingdom, the following rather humorous and characteristic anecdote, from the Belfast News Letter of the year 1788, may be not inappropriately introduced:--
"Some time since a Rev. French Huguenot, having been presented to a living in a remote part of Ireland, chose to officiate without the assistance of a curate; and, as his accent and the idioms of his language rendered him scarcely understood, his audience did not restrain their complaints, but brought them before the bishop, who appointed a day for hearing both parties in the presence of each other. The Huguenot, having received an account of their remonstrance to the bishop, took the first opportunity of inviting his discontented parishioners to 'deene with him on rost-beuf and ploom pudang,' which invitation tiny readily accepted, and hugely and heartily did they partake of the fare provided by their venerable pastor. On the day of hearing, the complainants set forth their allegations of his unintelligibility; to which the Huguenot replied:== 'My Lord, my parishioners say, when I read the Liturgy, and from the pulpit exhort them to amendment of life, that they cannot comprehend my meaning; but, my Lord, to put the matter to a test, I asked them to dine with me on rost-beuf and ploom-pudang: this they chose very well to understand, and really performed their parts to admiration; which is a demonstrative proof how groundless are their complaints.'"

[e] Chartrès. -- The descendants of this family exhibit as their crest the fleur de lis.

[f] Documents which go far to vindicate for the late Dr. Purdon, well known in Belfast as an eminent medical practitioner, the pedigree here referred to, are still in the possession of his family, but too long to admit of insertion here. The line is traceable through an immediate descendant of the royal line of France, the Viscount de Lavalle, who was among the Huguenot settlers in Portarlington, of the sixteenth century. Traditions also to the same effect still exist in various branches of the family. -- EDIT.

[g] Dolling was the younger brother of Count Dolling, of the village of Dolling, near Toulouse; but, having embraced Huguenot doctrines, he was obliged to fly to England about the time of the "massacre of Saint Bartholomew." The family chateau was of such magnitude and solidity, that it resisted the ravages of time until the commencement of the present century. The motto of the family, "Spero," was all that remained to the unfortunate emigrant.

[h] Dunville. -- The head of this family came from Normandy with William the Conqueror. Tradition states that the name is taken from a village in that country. The name of the first ancestor referred to above was Hugh; and his great grandson, Sir Roger Dunville, resided at Beyrsheath, in the County of Chester, A.D. 1281. His descendants continued there for many generations. William Dunville, Esq., of said county, left three sons, A.D. 1628, of whom Gilbert and John came to Ireland. Gilbert became Clerk of the Hanaper and M.P. for Kildare, and John became Clerk of the Common Pleas. W. Dunville, Esq., of Richmond, near Belfast, is the representative here of this family.

The above article is reproduced from the Ulster Journal of Archaeology, vol. 9, 1861.

Posted by an extract of reflection at Thursday, April 03, 2014