The French Settlers in Ireland - No 4 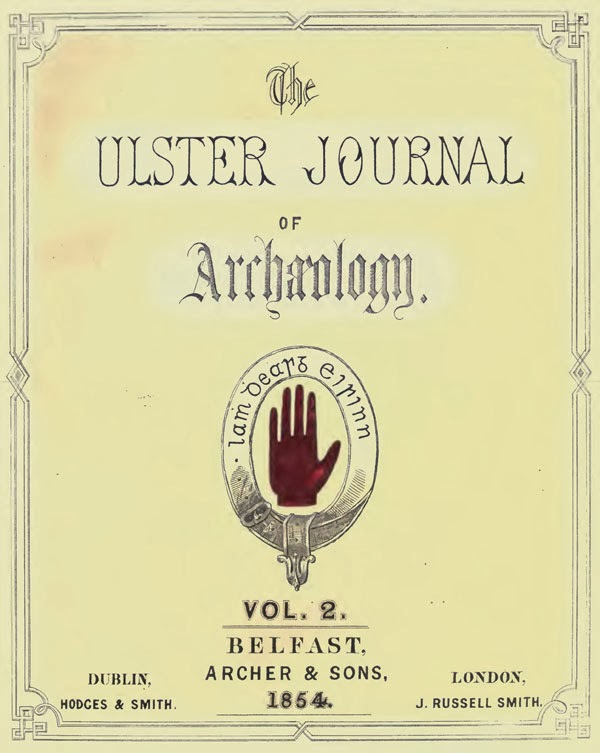 The Settlement at Youghal, County Cork.

The Huguenot settlers in Youghal appear to have established themselves in that town immediately after the accession of the Prince of Orange. The Corporation, now thoroughly Protestant, warmly welcomed the fugitives; and among its records appears an order, dated in 1607, "That Protestant refugees might be enfranchised on payment of sixpence; but that they should not vote for seven years, nor be qualified until then to serve as Church-wardens." As was the case everywhere, the new settlers brought with them industry, intelligence, and (in some instances) considerable wealth; and the towns that threw open their franchise to them were largely benefitted by the spirit of enterprise their presence soon created.

The Huguenots who settled at Youghal (unlike those at Cork, who were chiefly merchants) seem to have been mostly military persons. The Parish Registers frequently prefix to their names "Cornet," "Ensign," "Levt.," or "Captain," indicating no doubt the rank conceded to them by the Prince of Orange, when they took up arms in his service; a rank equal to that which they had enjoyed in the French army. There is no evidence of their having had at Youghal a separate service in their own tongue; but it was a common thing, a few years since, to find on the book-shelf of many of the inhabitants a Genevese French Bible or New Testament of the seventeenth century, handed down in the family the owner could not tell exactly how; and, sometimes the fly-leaves were inscribed with names and figures, written in a pale yellow ink, almost illegible from time, and (may we not apprehend?) from tears. If the date of the book did not reach the fatal year when home and friends were lost for ever, it at all events nearly approached it; as though the refugee would fain have preserved in his family, in all their solemn services, the language of his own ever-precious country.a These books are now rarely met with; change, that has been always resistlessly working in Ireland, has mostly swept them away. Those in whose eyes they once had value, are themselves long since gone; and why should the frail mementos continue? In Youghal the Huguenots have, with hardly an exception, become extinct; like exotics that could not flourish in a soil not their own.

Of these we shall now give some few notices.


Théophile Boisrond, who settled in Youghal, seems, from the dates in the Parish Register, to have been rather the son of Huguenot exiles than to have been himself expatriated. His child, Ann Henrietta, was baptized, 28 Sept., 1755; and, two years after, a lady of his name was married, who is believed to have been his sister, e.g.


Mr. David Chaigneau, with Elizabeth his wife, and Mary Ann, his daughter, settled in Youghal about the same time with Theophile Boisrond; and the simplest way of telling their story is to give an extract about each from the Parish Register. We find, under the head of "buried in Youghal:" --

A few years more and her husband is laid by her side:

Their tombstone is in the South Transept of St. Mary's Church, adjoining the nave. It bears the simple record:--

"HERE LIE
THE REMAINS OF
DAVID CHAIGNEAU, ESQr.,
AND OF HIS WIFE
ELIZABETH."

In the year after her father's decease we have Mdlle. comfortably settled:--


The only record of this name we can find, is the following, taken from the Burials:--


Arthur and Jaques D'Anvers settled in Youghal about the year 1730; the former was in holy orders, and may have been an officiating minister among his exiled brethren.b The Parish Register gives us the baptism of "Thomas, son of James D'Anverse," on the 23d Oct., 1737: and records the burial of "Mr. James D'Anverse," 14 June, 1740; and of the "Revd. Mr. Arthur D'Anvers," 23 July, 1754.


The Corporation of Youghal, in 1728, demised a part of the strand at the South of the town to Mr. John Dehays, a Huguenot Refugee, who embanked it, and formed the demense now called Green Park. James Dehays, brother of the foregoing, in 1757, bequeathed to the Protestant poor of Youghal £100, which has since accumulated to £217; interest, £13 0s. 4d. per annum. The name, now corrupted into Hayes, is still found among the Protestant population of Youghal.


This name appears but once in the Register, and may have been that of a sojourner rather than of a settler. Michael, son of William Delappe, was buried at Youghal, 27 Augt., 1769.


M. Perot Duclos, when he settled in Youghal, brought with him a son, Guillaume, and a daughter Marguerite; and, after his establishment there, had a child born to him, whose baptism by the name of Hanna took place 2 April, 1710. His surname was a difficult one for the scribe in the Parish Register, who sometimes spells it "Deu Clos," at other times, "Dewcloe," and lastly, "Ducros." Marguerite Duclos married, 9 October, 1718, Mr. William Parker. Her brother William died unmarried, in Nov., 1753.


Isaac Falquiere married, according to the Youghal Register, Elizabeth Cary, on the 27th June, 1699; and, no doubt, was the first settler of the name. We have further the burial of Jane Falquiere, widow, 22 Nov., 1730; and the marriage of Elizabeth Falquiere, with Thomas Banks, 8 June, 1731. The name was used as a baptismal name in the Banks family, subsequent to this marriage; and, it would appear that Elizabeth Falquiere was an heiress, and sole representative of the family at the time.


This name (which like so many others) seems to have suffered by alien attempts to write it down, is conclusively established to be that of one of our Refugees, from the following "Burial":--

Joseph Labatte served as Bailiff of Youghal in 1750, and as Mayor in the two successive years 1751 and 1752. In the second year of his Mayoralty, the Corporate Books show that he was actively mixed up with the question then much agitated in the borough, viz., the admission of freemen. M. Labatte refused to admit several claimants to their freedom at large, but offered to make them free of trade, which modified honor (as it did not confer the right of voting at parliamentary elections) the claimants declined, and they ultimately succeeded in obtaining their full privileges.

In 1755, the two brothers met a reverse of fortune, and failed in business. In the early part of 1756, they petitioned the Irish House of Commons (vide Journals) to insert clauses for their relief, in an Act about to be passed for the relief of insolvent debtors, which clauses were ordered to be placed in the Bill. On the 16th of January, Mr. Humphrey Minchin, agent for the insolvents, attended at the bar of the House, and handed in a list of debtors in the Marshalsea, among whom were Maxwell Olive, and Joseph Labatte, both of Youghal.

The Register records the burial at Youghal of Mr. Isaac Labatte, 27 Jan., 1765. We have no particulars relative to his brother's decease.c


This name is, we suppose, the one intended in the following record of a burial at St. Mary's, Youghal:--


The Register gives us the burial of Ann, daughter of John Marvault, surveyor, 26th September, 1766. There is an individual of the name still resident in Youghal, in humble circumstances, a Protestant.


Pierre Maziere, a lieutenant in the French army, settled in Youghal about the year 1740. His son David, was baptized 4th Oct., 1744, and was buried on the 6th of the same month. The Register records his own burial thus:--


We find this name in the Register, in the burial of David Perdu, 5th Jan., 1734-5. One of the name lately resided in Youghal, a young woman, a Protestant.

It may be that M. Ricard, jun., became so far denationalized as to have adopted the mal-pronunciation; but, when the old Huguenot comes himself to be buried, the Register reverts to the true spelling, or to something like it, and records:--


Jean Roviere, a sous officier in the French service, and subsequently in King William's army, was also one of the Huguenot settlers at Youghal. The Register gives us the baptism of Susanna, daughter of "Levt. John Roviere," 10th July, 1728, and her marriage with Thomas Day, 16th April, 1745. It also furnishes the time of the fugitive's own burial:--


M. Roviere seems to have rented, or owned, ground at the South end of the Town of Youghal. The site of the present residence of Matthew Hayman, Esq., called "South Abbey," from its standing on part of the ground of the ancient Franciscan Friary, is entered in the Duke of Devonshire's leases, "Roviere's Holdings."


[a] One of these interesting volumes is in the writer's possession, and now lies open before him. It is a small pocket New Testament printed at Amsterdam in 1699. The title page is:-- "LE NOUVEAU TESTAMENT; C'EST A DIRE La Nouvelle Alliance de Nostre Seigneur JESVS CHRIST. N, Edition Reveue Par les Pasteurs et Professeurs de Genève. A AMSTERDAM, chez PIERRE MORTIER, Anno 1699." To this are subjoined Clement Marot's well-known version of the Psalter, with a musical score; several Forms of Prayer; a Catechism; and the Confession of Faith, agreed on "d'un commun accord parles Eglises Reformées du Royaume de France."

[b] He must have acted as pastor here, but was not supported by any government salary, as the number of refugees in the settlement did not exceed fifty. The Irish House of Commons, in an address to the crown, presented on the 14th October, 1697, proposed "to endow a foreign clergyman in every parish where Protestant foreigners exceeded that number, in order that religious worship might be performed in their own language."

[c] As the family of Labatte also settled in Kilkenny, some other particulars will be given in the notice of that colony.

The above article is reproduced from the Ulster Journal of Archaeology, vol. 2, 1854.

Posted by an extract of reflection at Thursday, January 09, 2014