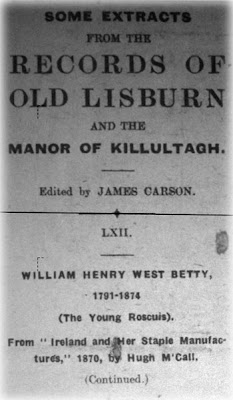 From "Ireland and Her Staple Manufactures," 1870,
by Hugh M'Call.

But now comes the great epoch in the professional life of Betty. The lessee of Covent Garden had been for some time in negotiation with the elder gentleman for the purpose of securing the services of the son, and at length the matter was arranged on the terms of fifty pounds a night. Great preparations had been made for his debut on the London boards, and on the evening of the 1st of December, 1804 -- ten days after the termination of his first engagement in Manchester -- he appeared at Covent Garden Theatre, in Dr. Brown's adaptation of Voltaire's tragedy, Merope. Nothing could have exceeded the excitement produced on this occasion. It seemed as if the world of London had been taken by storm, and for the time being the "Young Roscius" was lion of the West End, and the magnate East of Temple Bar. The "Morning Chronicle" thus alludes to the first night's performance:--


"So early as ten o'clock on Saturday morning, many gentlemen began to parade the Piazzas and Bow Street, in order that they might be near the doors when the crowd should begin to assemble. Before one and two o'clock numbers had taken their stations near all the doors leading to the pit, boxes, and galleries; and long before the doors were opened they stretched out in long, thick, close-wedged, impenetrable columns to the extremity of the Piazzas, in Covent Garden, and quite across Bow Street. Peace officers were provided inside the theatre, and a strong detachment of guards procured outside. The heat in every part of the house became excessive very soon after it was filled. In the pit many gentlemen fainted, and were dragged seemingly lifeless, up into the boxes. The ladies in one or two boxes were employed almost the whole night in fanning the gentlemen who were beneath them in the pit. Frequently we heard screams from those who were overcome by the heat, but could neither get out nor obtain the slightest relief. Upwards of twenty gentlemen who had fainted were dragged up into the boxes; we observed several more raising their hands, as if in in the act of supplication for mercy and pity. It was with satisfaction that we observed but few females exposed to this distressing state in the pit; they were but thirteen, and they fortunately were placed in situations so near the proscenium as to derive the full benefit of the air from the stage. Behind the scenes were many of the first personages, both for rank and learning in the country. Besides the Lord Chief Baron, Lord Melville, and Mr. Const, the counsel, there were all the theatrical judges of merit. Numerous groups of ladies of the first fashion were also content to stand during the whole of the performance in any hole or corner where they could get a glimpse. The Prince Regent occupied Lady Miller's box on the night of the first appearance at Drury Lane, and joined several times in the applause pealed forth by the general audience. Mr. Charles Kemble assisted on the occasion. Master Betty's reception of the character was classically correct. His performance was not the successful repetition of a mere lesson, but that of an experienced tragedian, rich in understanding and discrimination. He did not appear in the least degree fatigued by the exertions, but rather increased in energy during the progress of the piece. In the third act his restrained tenderness -- his apparent transports at the praises bestowed on him by his mother -- the difficulty with which he refrains from declaring himself -- the discovery of her son being alive, and the determination of the son to revenge her wrongs, were admirably conceived, and so effectually rendered as to bring down bursts of applause from all parts of the house."

The receipts of the theatre during the twenty nights of Betty's first London season amounted to twenty-seven thousand guineas, being the largest aggregate ever before realised in any similar period at either of the great houses. Of that sum the fortunate performer received one-tenth share, which represented fifty guineas a night for three nights, and one hundred guineas a night for twenty-five nights. Besides this he had four free benefits that brought the aggregate up to three thousand eight hundred guineas, and, in addition, he received presents of plate, which made a grand total of four thousand guineas for about a month's performances.

This unparalleled success is said to have almost turned the heads of the fortunate youth's parents, and to himself the rapid change of position, the magical turn of affairs that brought him from the comparative quiet of a linen warehouse to the exciting scenes connected with theatrical life, must have appeared as the realisation of some fairy tale. The young gentleman was then little more than thirteen years of age; he had been about eighteen months on the boards, and during that time he had netted as many thousand pounds as he was years old.

Park Lane and Piccadilly turned out their hosts of patrons in all the blase of jewelled coronets and diamond necklaces.

Rubicund dowagers and red-faced aldermen from the regions east of Temple Bar migrated from the city to gaze on the "wonderful boy." George the Third summoned the youthful prodigy to attend at St. James' Palace, where select readings were given from different authors before his Majesty and the rest of the Royal household. When "Hamlet" was to be performed at Covent Garden, Mr. Pitt actually adjourned the House of Commons that he might see Master Betty in the role. Sheridan brought the lad into his box at the conclusion of the piece, and presented him as the Young Roscius to Fox, Burke, and Curran, who had left the Senate House to witness the performance.

In the midst of all this popularity, and when wealth was pouring in on the favoured tragedian as if he had been in possession of the philosopher's stone, the whole course of events did not run in his favour without a ruffle. A few of the critics stood away from the admiring throng, and strongly dissented from the "childish enthusiasm" for the boy-player. Partisan spirit was aroused in several quarters, and the jealousy of the green-room -- perhaps the bitterest of all such feeling -- added strength to the minority. At the very time when young Betty drew immense crowds to Drury Lane, and when he was receiving one hundred guineas a night, Mrs. Siddons and her brother, John P. Kemole, were playing to thin houses at Covent Garden on the respective salaries of £30 and £25 a night. Envy, hatred, and malice followed this turn of affairs, and the advocates of the "legitimate drama" fought furiously against the mania for "infantile prodigies." Richard Cumberland, the dramatist, devotes some pages of his autobiographic memoirs to a very ungenerous critique on Master Betty, and becomes savagely facetious in his remarks on what he designates "beardless youths usurping the popularity of votaries of the stage." "How delicious," says the green-eyed Richard, "is it to be praised and panegyrised by leading critics. To be caressed by dukes, and, still better, by the daughters of dukes; to be flattered, by wits, feasted by aldermen, stuck up in the windows of print-shops, and, last of all, set astride upon the cut-water of a privateer, like the tutelary genius of the British flag."

Master Betty was very tall for his years, and when he stood before a London, audience he had considerably improved in the power of self-possession. He was exceedingly handsome in personal appearance, and highly graceful in action. His voice was round and full, and of such remarkable compass that, without apparent effort, he could make himself distinctly heard in all parts of the largest theatre. But his was a popularity as evanescent as it had been wonderful. Once on the inclined plane, the descent was rapid and irrecoverable.

It is a strange feature in his history that, from the time he arrived at the age of sixteen, his power over the play-going public began to wane, and when he took leave of the stage as the "Earl of Warwick," in the Southampton Theatre in 1824, the house was not half filled. The "marvellous boy" had by that time degenerated into a very commonplace man. It seemed as if the wand had been broken by which, in his juvenile days, he had charmed the most fastidious critics, the highest men of the theatrical world, and nearly every patron of the profession, and that the enchanter was no longer able to cast his spell over the play-going multitude. Having seceded from the stage, he commenced to study for the Church, and very soon afterwards became an ordained minister; but, not finding himself at home either in the reading-desk or the pulpit, he had the good sense to leave the field of theology and to retire into private life. His failure, in that case, forms a strange passage in the history of genius.

Betty, the favoured actor, who, when in the height of his popularity, wielded almost superhuman power over the theatrical world, was unable, when he became a Church clergyman, to preach in such a style as would Keep up the attention of a country congregation for half an hour. Mr. Betty, has, since then, lived in complete retirement, at least so far as regards theatrical life; but he never forgot either the stage or its people, and his hand was always open when actors in distress solicited his assistance.

He quitted the stage in 1808, but after studying for two years at Cambridge, returned to it in 1812. He retired finally in 1824, and lived for fifty years on the ample fortune he had so early amassed. He died in London, August 24, 1874.


(This article was originally published in the Lisburn Standard on 21 December 1917 as part of a series which ran in that paper each week through 1917 and into 1918. The text along with other extracts can be found on my website Eddies Extracts.)


Posted by an extract of reflection at Wednesday, December 21, 2011