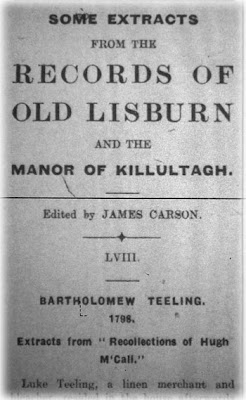 Extracts from "Recollections of Hugh M'Call."


Luke Teeling, a linen merchant and bleacher, resided in the house afterwards occupied by Robert M'Call, and which house is situate in the south side of Chapel Hill, immediately adjoining the chapel.

His eldest son, Bartholomew, familiarly called Bartley, left his home in 1792, went over to France, and some time after introduced himself to Napoleon, then First Consul, who appointed him lieutenant in his bodyguard.

Teeling landed at Killala, in the County of Mayo, with the French troops. The British army met them at Castlebar, and the French invaders chased them out of the town. The two armies met several times, but at Colooney, County Sligo, Teeling was taken prisoner and brought to Dublin.

He was brought before Major Sirr, the chief military authority of the city, and who had been in command from 1793 till Teeling's arrest in 1798. Sirr could not really assure himself that his prisoner was Teeling, formerly of Lisburn. He had him brought into his parlour several soldiers in plain clothes being stationed in the hall to prevent any attempt at escape.

The major, knowing that in the Dublin Linen Hall were often to seen merchants from Lisburn, sent his servant thither to say that a gentleman of that town was anxious to see a Lisburn merchant. William Coulson, founder of the Damask Factory, came to Sirr's house, and at once recognised Teeling, and shaking hands with him, thus unquestionably proved his identity.

Teeling was immediately tried and found guilty, as several members of the English army had seen him leading one wing of the French troops at Colooney, near Sligo. He was hanged next day at Arbour Hill, Dublin.

Thomas O'Hagan married a very pretty daughter of Luke Teeling. She was his first wife. Belfast had the honour of sending two Lords Chancellors to the Irish Woolsack -- O'Hagan and Napier -- and one to the English -- M'Calmont Cairns.

The will of Bartholomew Teeling, Lisburn, 1775, may be seen in the Record Office, Dublin, probably the father of Luke Teeling.

Extracts from "Ireland and Her Staple Manufactures,"
by Hugh M'Call, Third Edition, 1870.

Bartholomew Teeling was one of the malcontents who attended the linen markets with Henry Munroe. This young gentleman had joined the United Irishmen when he was little beyond the years of boyhood, and soon became one of its most zealous members. Wild, wayward, and warm-hearted, that juvenile patriot entertained all those romantic ideas of nationalism which led enthusiastic Irishmen to indulge in the dreamiest visions of reform. His father was very extensively connected with the staple trade, and, about 1796, stood at the head of a prosperous business as an extensive bleacher. The family resided in the house situate immediately adjoining the Roman Catholic chapel; and a field at the back of the garden is still known to the older inhabitants of Lisburn as "Teeling's Mount."

Bartholomew Teeling had been brought up to assist in the mercantile pursuits of his father, and attended to the bleaching of cloth and the purchase of brown linens, but, in an ill-starred hour, he went over to France, and got a commission in the Imperial Army. When the mad and mischievous project of sending French soldiers to aid the Irish in the equally insane war against England had been matured, Teeling was appointed aide-de-camp to General Humbert, and in that capacity he embarked with the troops and landed at Killala in August, 1798.

The first battle that took place between the invaders and the British army was fought at Castlebar. By mere chance the French troops were victorious and took possession of the town, but the commander, finding he could not maintain his position prudently sent terms of capitulation to General Lake.

As the aide-de-camp of the Gallic chief Teeling was appointed to convey the message, and, accompanied by an escort bearing a flag of truce, he rode forward to overtake the retreating troops. No sooner, however, had he arrived within range of the enemy than his flag was fired on and his escort shot. This disgraceful breach of the rules of honourable warfare was indignantly resented by the officer, who, having himself been taken prisoner, immediately demanded an audience of the commander. When he stood before General Lake and delivered his message, he complained bitterly of the insult offered his flag and the murder of his escort. "By the tone of your voice, I believe you to be an Irishman," said the General, "and I will treat you as a rebel." "Do as you please sir," replied Teeling, "but recollect that my commander is General Humbert, and that several British officers are his prisoners at Castlebar." The unexpected reply startled the British commander; he at once felt that the lives of these officers were in imminent peril, and after some parleying Teeling was permitted to return.

When he arrived at the quarters of the French army and informed his chief of what had occurred, the latter felt so much incensed that he threatened to shoot every English prisoner be had in custody. But Teeling immediately appealed against that terrible decree to the nobler feelings of the commander. "No, General," said he, "you must rather take revenge on your enemies by your magnanimity." The effect of this generous sentiment was to cool down Humbert's indignation, and ultimately Teeling succeeded in obtaining freedom for six British officers and having them escorted for seven miles beyond Castlebar.

After the defeat of the French troops at Colooney all the Irish found in their ranks were charged with high treason. Teeling was among the prisoners, and ordered for trial by court-martial. Some difficulty arose in consequence of the Crown not being able to identify the accused, even with the assistance of a treacherous ruse by which Major Sirr sought to accomplish that object. At length the notorious informer Burke -- a pet of Castlereagh -- was brought forward as V Government witness. This man swore that under a feigned name he had joined the French army as a volunteer, and marched with the troops from Castlebar to Colooney, during which time the prisoner acted as an officer under General Humbert. On this evidence Teeling was found guilty and sentenced to death.

The fate of the condemned youth called forth immense sympathy in Dublin and throughout the provincial towns, but especially in those parts of Ulster where his name was so much associated with that chivalrous love of country which the native Irish look upon as the noblest of all virtues. Considerable influence was used in the hope of obtaining a remission of the sentence, but the authorities were inexorable, and the imperious Cornwallis refused to meet a deputation of mercy. In vain were all appeals to the Viceroy, and the plea that the condemned aide-de-camp had been the means of saving the lives of the captive officers at Castlebar made no impression on the chief of Dublin Castle. "The law must take its course," was the reply of the Lord Lieutenant.

On the 24th of September, 1798, Bartholomew Teeling was taken from his place of confinement in Kilmainham to Arbour Hill, where a gallows had been erected, and where thousands of people were assembled to take a last look at the condemned. Dressed in the Irish uniform, and leaning on the arm of Brigadier-Major Stanley, he walked to the place of execution with the solemn step and thoughtful aspect which so well became a man about to be hurried into the eternal world. He died almost without a struggle. General Humbert, in alluding to his conduct during the march from Killala, said: "In all the towns through which we passed Teeling, by his bravery and generous disposition, prevented the insurgents from proceeding to the most criminal excesses."

Bartholomew Teeling, United Irishman, was the eldest son of Luke Teeling and of Mary, daughter of Jolin Taaffe, of Smarmore Castle, Louth. He was born in 1774 at Lisburn, where his father, a descendant of an old Anglo-Norman family long settled in County Meath, had established himself as a linen manufacturer.

The elder Teeling was a delegate for County Antrim to the Catholic Convention of 1793, better known as the "Back Lane Parliament." Though not a United Irishman, he was actively connected with the leaders of the society, and was arrested on suspicion of treason in 1796 and confined in Carrickfergus prison till 1802.

Bartholomew, who was educated in Dublin at the academy of the Rev. W. Dubordieu, a French Protestant clergyman, joined the United Irish movement before he was twenty, and was an active member of the club committee.

In 1796 he went to France to aid in the efforts of Wolfe Tone and others to induce the French Government to undertake an invasion of Ireland.

His mission having become known to the Irish Government, he deemed it unsafe to return to England, and accepted a commission in the French army in the name of Biron.

In the autumn of 1798 be was attached to the expedition organised against Ireland as aide-de-camp and interpreter to General Humbert, and embarked at La Rochelle, landing with the French army at Killala.

During the brief campaign of less then three weeks' duration which terminated with the surrender of Ballinamuck, Teeling distinguished himself by his personal courage, particularly at the battle of Collooney.

Being excluded as a British subject from the benefit of the exchange of prisoners which followed the surrender, though claimed by Humbert as his aide-de-camp, he was removed to Dublin, where he was tried before a court-martial. At the trial the evidence for the prosecution, though conclusive as to Teeling's treason, was highly creditable to his humanity and tolerance, ono of the witnesses deposing that when some of the rebels had endeavoured to excuse the outrages they had committed on the grounds that the victims were Protestants, Mr. Teeling warmly exclaimed that he knew no difference between a Protestant and a Catholic, nor should any be allowed. (Irish Monthly Register, October, 1798.)

But despite an energetic appeal by Humbert, who wrote that "Teeling, by his bravery and generous conduct in all the towns through which we have passed, has prevented the insurgents from indulging in the most criminal excesses," he was sentenced to death by the court-martial, and notwithstanding the recommendation to mercy by which the sentence was accompanied, he suffered the extreme penalty of the law at Arbour Hill on September 24, 1798.


(This article was originally published in the Lisburn Standard on 23 November 1917 as part of a series which ran in that paper each week through 1917 and into 1918. The text along with other extracts can be found on my website Eddies Extracts.)


Posted by an extract of reflection at Monday, November 21, 2011