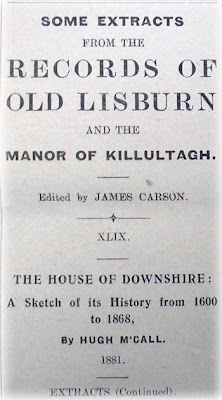 The eventful reign over the family property of Arthur, second Marquis of Downshire, contains within its history some political incidents which form very exciting chapters of Ireland's annals.

The Act of Union passed the Irish Parliament on the 21st of February, 1800 and was ratified by the British Legislature in the following July.

The Marquis of Downshire voted against Lord Castlereagh's Bill, and as the head of the landed proprietors of his native county it was considered a great stroke of policy to make him a special martyr. Accordingly, a clean sweep of all official honours held by his Lordship marked the commencement of the pettiest course of vindictive feeling ever perpetrated by the Administration of any great State. The colonelcy of the Down Militia was taken from him, his name was erased from the list of Privy Councillors, and he was superseded in the office which he held as Custos Rotulorum of the county. Some appointments in the Civil Service shared the like fate; but for these he cared little.

The indignities he had suffered pressed heavily on him, and rapidly undermined a naturally robust constitution. He it was who had created the Irish Militia, at a time, too, when the Government very much required the aid of influential land-lords; the loss of the colonelcy of that troop was keenly felt by him, and preyed upon his thoughts more than all else he had endured at the hands of Imperial vengeance. Before the close of that summer the health of the noble Marquis broke down, arid after a few weeks' confinement, during which his sufferings were less bodily than mental, he died on the 7th of September, 1801, a direct victim of State persecution.

The early death of Lord Downshire (he was only in his forty-eighth year), and the very peculiar circumstances by which that event had been brought about, called forth the utmost sympathy for his widow and family, and the greatest indignation a against the English Government, the Irish Viceroy, and the Chief Secretary.

Under the short reign of Arthur, the second Marquis, the property had been much improved. Many leases granted by his father, who was lord of the Downshire estates for more than half a century, had lapsed, and in arranging the future rental his Lordship equitably kept in view the tenants' investments, which were fixed on the soil, as well as the increased value given to farms through circumstances outside the control of occupiers. And so perfectly satisfied were the farmers with the justice done to them that numbers held on then; property without accepting the new leases offered them. In these cases a very high compliment was paid to their land-lord. As a matter of local history, the fact that the agriculturists on the Downshire estates considered that their industrial rights were quite as secure when they were mere tenants at will as if they held leases of their lands, was in itself a noble testimony of faith on the one side and baronial equity on the other. The old Castle of Hillsborough had many attractions; it abounded in time-honoured associations as well as in the picturesque, and the remains of Gothic grandeur to be seen around the ancient ruin never failed to stir up in the mind of the thoughtful visitor hosts of historic recollections. A writer who published a very interesting work on Down in 1802 describes the portal of Hillsborough Castle as having evidently been the grand entrance to an extensive fortification. He says -- "The room over the gateway is elegantly fitted up in the antique style. Inside the masonry of a square fort, with its immense bastions, there is a broad and beautiful green, and a wall round the rampart, which overlooks the most admirably cultivated country, and from whence may be seen a splendid view of the noble plantations in the Park." There was something sadly touching in the circumstances under which the Marchioness in 1801 had passed into the dark valley of widowhood, and yet many incidents followed to throw light on then gloom. Four sons and two daughters were left to her charge, and three months afterwards she was delivered of a fifth son, that might have been called a child of sorrow, but whom the Marchioness lived to see happily married, a colonel of dragoons, and possessed of a handsome property. In course of the year that succeeded the death of her husband she was created Baroness Sandys of Ombersley, Worcester, on the demise of her uncle, the second baron, and at the same time she succeeded to the valuable estates of that nobleman which title and property her second son, Arthur Moyses Hill, afterwards inherited. Mary Sandys Trumbull, Marchioness of Downshire, who had also become possessed of East Hampstead Park, Berkshire, was a woman of high spirit as well as superior intelligence, very benevolent in disposition, and, like most of the fair sex, exceedingly fond of having her own way. But while usually acting on that peculiarity in the character of nearly all daughters of Mother Eve, she paid marked deference to public opinion. Her leading principle, however, was that of in all cases showing the greatest respect to the memory of her  husband, and as far as possible carrying out all his projects.

When Viscount Castlereagh's address to the electors of Down appeared in 1805 the Marchioness of Downshire and her family were in London.

A gentleman of high standing in Down, and one of the most ardent supporters of the noble candidate, called on Lady Downshire to solicit her aid and influence on behalf of his friend. He was received with the utmost courtesy, and after declaring the object of his visit, her Ladyship said that, in making the application for her support, some great facts seemed to have been forgotten. The most prominent of these was her being the widow of the nobleman whom the English Government, with Lord Castlereagh as its instrument had persecuted even to the death. "I cannot give your friend any support," continued the high-minded peeress, "but will oppose him, and so sure as my name is Mary, Marchioness of Downshire, effectually, too."

The candidate put forward to oppose Castlereagh, supported by the Marchioness, was Colonel Meade, son of Lord Clanwilliam, one of the most Liberal of Ulster's resident landlords, and whose name as such was worthy of being associated with that of the house of Hill, so far as related to popular representation.

The time allowed to make preparations for the impending contest was very limited. Lord Castlereagh's address to the electors appeared on the 15th of July; Colonel Meade's appeal was published on the 24th of the same month -- just three days before that on which the High Sheriff had arranged for the event to come off. Immense electioneering placards, each dated Hillsborough, July 24th, 1805, were posted in every district from Newry to Donaghadee. I give one extract from those notices:-- "The freeholders' of Down are especially requested to observe, that the Honourable Colonel Meade has offered himself for its representation at the coming election, which commences on Saturday next at Downpatrick, where it is hoped every Independent voter will attend, and honour him with hi vote and interest."

I have heard men who recollected that wonderful contest speak with the greatest enthusiasm about it. They said that so great was the excitement in town and country, that during all the time of its being carried on little else could have been heard, when public affairs were alluded to, than the prospect of one or other of the candidates.

The Marchioness of Downshire had a number of very intelligent men engaged in canvassing the voters, and she herself did not spare either bodily toil or expensive journeyings day or night, and most successful continued to be her visits to farm-houses. It was said that Colonel Meade called on her one day to inquire whether she had looked after the Kilwarlin electors. "The greater number of the men were working in the fields when I canvassed that district," replied the Marchioness, "but, Colonel, I did better for you than I could have done had I met each of them, for I got all the wives to promise that their husbands would vote on the right side, and the unmarried farmers' sweethearts whom I called on assured me they would induce their friends to support the Independent candidate." Lady Downshire had studied the question of women's influence to some purpose.

On Monday, the 29th, the Courthouse at Downpatrick was open for voting, but very little business was done. Fifteen votes were given for Castlereagh and ten for Meade. It was arranged that the freeholders on each side should, bring their leases with them when they came to vote.

The polling continued on Tuesday, the 30th of July, and, amidst excitement never before equalled in Down, was carried on till Saturday, when the state of the voting was announced as -- Castlereagh, 779; Meade, 712. Immense rejoicing on the part of the friends of the candidate who had made such headway was the result. All Comber seemed aroused to ecstacy. Barrels of ale were rolled into Cow Lane and Mill Street, and the worthy people drank it out of noggins, till the men and women gossipped in guid braid Scotch that would have puzzled a Paisley bodie to interpret. Newtownards men became quite wild, and thought the battle all but won. Monday, the 5th of August, Castlereagh polled 188 and Meade 177. Then came the turning-point. The Marchioness of Downshire, with her eldest son and Mr. George Stephenson, J.P., agent of the estate, arrived in Downpatrick on Tuesday, and received quite an ovation. The presence of that lady had immense influence on many wavering voters. It was considered as an omen of success, and immediately afterwards vast numbers of electors crowded the polling-booths and voted for Colonel Meade, and from that hour until Saturday, the 10th of August, and twelfth day of the election, the scale gradually turned, and at four o'clock that afternoon the numbers were -- Castlereagh, 1,481; Meade, 1,528. On Monday, the 12th instant, Lord Castlereagh ascended the hustings and declared his intention of giving up the contest; but the friends of Colonel Meade continued to poll their men till making for him a clear majority of 450. Next day, Thursday, the 15th, the High Sheriff declared Colonel Meade duly elected, and the new member was chaired through Downpatrick, followed by some thousands of freeholders and others. The arrival the same evening of the newly-elected member and his friends in the ancient town of Hillsborough was hailed with lusty cheers, and the welkin rang with "Meade for ever." Nothing could have exceeded the enthusiasm of that turnout of the people; the street in front of the park gates was one dense mass of heads. Of the multitude that crowded the vast square, a writer who witnessed the scene has recorded:-- "The shade of the late lord seemed to smile on the procession and to say, 'The grateful tribute of affection which you have this day paid to my widow and children is to me most acceptable. You have restored to its lustre that honour of my family which had been blown upon but not tarnished.'"

In a volume entitled "Irish Protestant Letters," by Robert Redman Belshaw, published in New York in 1855, appears a number of poems by "Leamh Dhearg," Lisburn, "N. G.," Lisburn, and "Boardmills." Could any reader supply Mr. Carson with Information that would lead to the identification of these writers?


(This article was originally published in the Lisburn Standard on 21 September 1917 as part of a series which ran in that paper each week through 1917 and into 1918. The text along with other extracts can be found on my website Eddies Extracts.)


Posted by an extract of reflection at Wednesday, September 21, 2011