The Charge of The Ulster Division at Thiepval 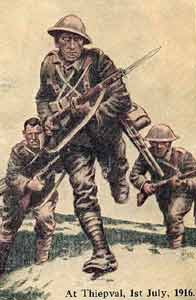 Was ever a Charge in the world like this?
Shall ever a son of Ulster miss
A fame that is wholly and solely his --
A fame of sublimest splendour?
The lads who laughed in the face Death!
Above the roar of the cannon's breath
Singing their sacred shibboleth
Of "The Boyne" and "No Surrender!"

Giant-strong, with the strength of Right --
Fired, by the soul of their sires, to fight --
What cared they for the foeman's might,
Or how many cannons thundered?
Face to face with a hundred Huns,
Half-a-score of Ulster's sons
Silenced the thunder of the guns --
Ten -- a match for a hundred!

Nought could stay them: nought them stop:
A thirst for blood to the last red drop,
Charging along on the topmost top
Of the waves of Fire that bore them!
On, with a thirst that nought could quell,
Thro' a hurricane-shower of shot and shell,
To fight -- or fall, as their Fathers fell,
In the doughty days before them!

Merrily -- every mother's son --
Laughing, as tho' they fought for fun,
With a song and a cheer they charged the Hun,
Marring his Maker's image!
Chaffing, as tho' each shell might be
The whistle-call of a Referee!
And the bloodiest tussle in History
Only -- a Football scrimmage!

Into the Hell of "No Man's Land,"
Thro' poisoned air, at their soul's command,
And a shrapnel-storm that none could stand,
Charging, in wild derision.
Past Sentry Death, who, wondering, kept
His vigil there -- on, on they swept,
Where never a man could live -- except
Ulster's Divine Division!

Flinging his fun in the face of Death --
Above the roar of the cannon's breath
Singing his sacred shibboleth
Of "The Boyne" and "No Surrender!"
Wherever a son of Ulster is,
Honour and Glory shall aye be his!
Was ever a fight in the world like this,
Or a charge of sublimer splendour?

Images: At Thiepval;  The Attack of the Ulster Division by J.P. Beadle in Belfast City Hall.
Posted by an extract of reflection at Friday, July 01, 2011