The Revival Movement in Lisburn, 1859. 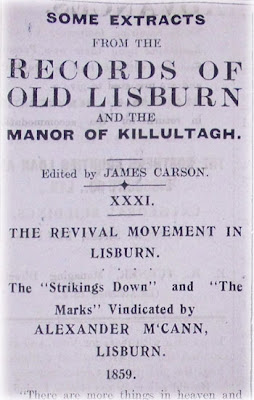 
THE REVIVAL MOVEMENT IN LISBURN.

The "Strikings Down" and "The Marks" Vindicated by
ALEXANDER M'CANN, LISBURN.  1859.

"There are more things in heaven and earth, Horatio, than are dreamt of in your philosophy." -- Shakespeare.

The year 1859 was one of extraordinary mental excitement or disturbance in the North of Ireland. It was, and is, known as the year of "The Great Revival." A wave of religious enthusiasm passed over the country, expressing itself in strange physical phenomena or manifestations. These manifestations were to a large extent confined to women. They occurred frequently at religious or revival meetings and consisted of "Strikings Down," in which the individual became hysterical, took convulsions, swooned, or, fainted, "The Visions" in which strange revelations were supposed to be received, and "The Marks."

Many divines and laymen, including the author of "The Year of Grace" and Alexander M'Cann, believed firmly that the movement was from above. Others equally reliable, including the Rev. Isaac Nelson, who wrote "The Year of Delusion," The Rev. William Breakey, First Lisburn Presbyterian Church; the Rev. Mr. Hall, the Cathedral; and the Rev. William Molloy, Methodist minister, had grave fears that the moving influence might have been from a different direction.

Mr. Breakey delivered a lecture setting forth his views on the matter. Later, Mr. Hall, Mr. Molloy, and Mr. Breakey, wrote letters, which were published, denouncing the manifestations. Hence Mr. M'Cann's pamphlet, which runs to some 64 pages.

M'Cann tells how, he secured an interview with Mr Breakey in Mr. Reilly's shop and how after some conversation, Mr. Breakey left, "insinuating I was going mad."

Mr. Breakey denounced the manifestations as "most dangerous superstitions." Mr. Molloy -- "shocking frauds and absurdities." Mr. Hall -- "I have no hesitation in pronouncing at once that the so called "Marking" had been done with a blue-bag or something similar."

Mr. M'Cann demands in his pamphlet:--


Is the present revival movement, including the "Strikings Down," "The Visions," "The Marks," the work of the Devil? of man? or of God?


And proceeds to answer these questions carefully and minutely to his own satisfaction.

The following is an extract from his account of "The Marks" --


Having frequently been an eye-witness to those marks coming forth on the body I find no difficulty whatever, in giving an account of the proceedings. During the time the person is getting "The Marks," she is quite awake and conscious of the pain. The time occupied in marking varies according to the number of marks put on. Sometimes there is but one word, for instance, the word "Lord" upon the arm, and several words on the legs, such as "I am God," Remember Me," while the words are being put on no one must be allowed to interfere with, or touch them till they have been finished. Once finished and up to the appointed hour previously named for their departure, no power on earth could obliterate or remove them.

"The Marks" are thus put on, the person who has been "Stricken Down" several times -- or, as it may be, only once before -- is in an unexpected moment, and without any previous intimation thereof, "Stricken" again and, as I am aware, often drops down suddenly on the floor, and there she lies to be gazed upon and wondered at by person who may happen to be present. Some twenty or thirty minutes may have any elapsed, when that "still small voice" which has now become so familiar to the "Stricken" one, whispers to her "Doubt not." Immediately she finds the arm, the leg, the forehead, or the breast, being operated upon, and, to use her own expression, just as if it were something like a steel pen pricking.


He enters further into minute details regarding the process and its variations.

On one occasion Mr. Breakey and Mr. Hall hearing of a case proceeded to the house to investigate They found a girl under the influence, and were informed "The Marking" was in progress. The girl and those present refused to allow "the Marks" to be seen till they were flushed. The clergymen, however, insisted and saw marks on the body, but demanding water and soap they washed them off, and left declaring a blue-bag had been used, and that the whole affair was a fraud. The pamphlet makes strange reading in this year of grace, 1917. Who Alexander M'Cann was does not appear, but he was probably the same Alexander M'Cann who took such a prominent part in 1863 in connection with the petition against the return of Mr. John D. Barbour to Parliament.

Francis William Crossley was born at Glenburn, Dunmurry, in 1839, and in partnership with his brother founded the firm of Crossley Brothers, gas engine manufacturers, Manchester.

Mr. Crossley, on his mother's side, was directly descended from the De la Cherois--Crommelin families, so closely connected with the early history of Lisburn. The book is a religious biography of entrancing interest. The opening words of the preface written by the Rev. Alexander M'Laren, are:--


Frank Crossley was a nineteenth-century saint whom Francis of Assisi might have recognized as a brother in faith and spirit.


The chapter on the Huguenot settlement in Ireland and the De la Cherois and Crommelin families is valuable and of considerable local interest.

THE PLANTATION OF IRELAND
or
A Review of the Origin and History
of
Her Earlier Colonial Settlements,

This little volume of 78 pages is of no value in so far as the records of Lisburn are concerned. It deals with a period commencing some centuries before the Deluge and ending about the year 1300 B.C. Its only local interest is that the author was a Lisburn man, and that a large portion of the book was originally delivered, as a lecture, before the old Lisburn Literary Society.

This little book of 122 pages is a religious biography, and history of Methodism, in the Maze district of Lisburn. James Carlisle was born in 1815, and died in 1889. His father, George Carlisle, had the privilege of hearing the Rev John Wesley preach. The book is a simple and homely record of the doings and aspirations of a large number of well-known people and families in the district. Preserved in its pages is an interesting letter written by Sir Robert Hart, from Peking, in 1889, to the Rev. J. J. Thornton:--

I am glad you thought of writing to me in connection with the "Zion" jubilee, for, long as it is since I left that part of the world, I still have an affectionate recollection of the place and people; of course, like many a child, I hated to be forced to attend service there when not in the humour, but now time has mellowed me, and the memory is simply a delight. As I write, how well some faces and sounds come up. I can see some one going round to snuff the candles after the sermon. I can hear the women on one side, after the men finish on the other, singing that very pathetic tune --

'I'll creep before Him as a worm,
And see Him die for me.'

I can follow the steady, solemn voice of dear James Carlisle,, as he delivers an affectionate Watch-night address. I can see down the hill, and over the bridge, and away along the broad straight road, with high trees on each side, having on one hand. Carlisle's house, and on the other the lane that led up to Sam Jones's, and which, after passing the Phenix's and Bradbury's, touches the Maze and turns off by Knox's; indeed, as I write, it is astonishing how forty years ago comes back again! I suppose it is the same with all who go far from home and Work in foreign lands; we never forget, and a sound, or a smell, or a sight brings up cradle-days, and all the dear surroundings of Home sweet Home. I have had to stop here for a moment; the tears get into my eyes; fancy weeping in 1889, in Peking, over recollections of Priesthill in 1849; but so it is, and it's good to have one's memory roused and one's heart touched, and awake from the loneliness and worldliness of age! Yes --

'We may build more lofty habitations,
Fill our halls with paintings and with sculptures,
But we cannot buy with gold
The old associations.'

Looking over the list of subscribers, I do not see many of the old names. Among them I see the name of Ralph, -- I wonder who he is! I also recognise the names of Phenix, Shields Hinds, and of course, David Carlisle. Although no longer one of your neighbours, I am glad to have the opportunity of once more showing the old friends that I have not forgotten the old place, and so I enclose a cheque for £100; you can give £60 or £70 to the chapel fund, and the rest you can divide among the poorer members of your congregation. A pound here and a pound there may be of service, especially coming when not looked for, and James Carlisle can help you in choosing the recipients. It is not a charity this, mind you! but simply a loving gift, from an old friend who has done well, to others who can be helped by help, and who worship-in the old place.

My return to Europe is again delayed; I am a slave to work here, and, till it is done with, I do not consider myself, free to move. But if ever I do see the north of Ireland again, I shall certainly have a stroll along the banks of the canal, look at the kids among the whins, and spend an evening in Zion Chapel. Give my love to Carlisle, and with kind regards to all who knew my father or remember my name.


Bishop Jeremy Taylor died at Lisburn 1667. His second wife, Joanna Bridges, was a daughter of Charles I. It is stated that Charles, when very young, married the daughter of a country clergyman, Joanna's mother. For reasons of state this marriage was annulled. She brought some fortune and a number of valuable pictures to the divine, who was afterwards made Bishop of Dromore, at the Restoration. Jeremy Taylor and Joanna Bridges had issue, a daughter, also named Joanna, who married a Mr. Jones of Lisburn. She brought to her husband an interesting collection of pictures. These pictures seem to have been divided amongst Mrs. Jones's descendants. Some of them are still in possession of Mr. Clarke, Roseville, and other members of the Clarke family, and of the Wilson, Bruce, and other families, descendants of Joanna, daughter of Jeremy Taylor. (Condensed from article by John Ward, F.S.A. Notes and Queries, November, 1910.)

The Rev. John Carleton, D.D., commenced his ministerial duties as curate of the Lisburn Cathedral, when the Rev. Snowden Cupples, D.D., was rector. About 1792 Lord Hertford induced Mr. Carleton to go to England and presented him with the living of Arrow, Warwickshire.


He died unmarried in 1818 and among other legacies, left £2,000 on trust to the rector and curate of Lisburn, and their successors in all time, the capital to be invested in good security, and the interest distributed on each St. Thomas' Day among deserving poor householders of all denominations in Lisburn Parish, the parish priest, and the Presbyterian minister doing each his share in the good work.


Dr. Carleton was the descendant of an old family that claimed as its founder Christopher Carleton, the collector of customs in Belfast, to whom William the Third, during his sojurn at Hillsborough in June, 1690, addressed his letter, empowering the collector to pay £1,200 a year in aid of the income of Presbyterian ministers in Ireland.

(This article was originally published in the Lisburn Standard on 18 May 1917 as part of a series which ran in that paper each week through 1917. The text along with other extracts can be found on my website Eddies Extracts.)

Posted by an extract of reflection at Wednesday, May 18, 2011